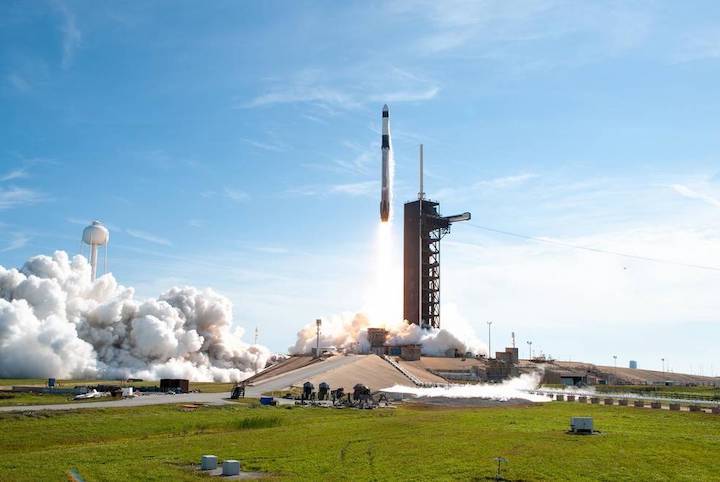 A SpaceX Falcon 9 rocket lifts off from Launch Complex 39A at Kennedy Space Center in Florida at 11:17 a.m. EST on Dec. 6, 2020, carrying the uncrewed cargo Dragon spacecraft on its journey to the International Space Station for NASA and SpaceX’s 21st Commercial Resupply Services (CRS-21) mission. Dragon will deliver more than 6,400 pounds of science investigations and cargo to the orbiting laboratory. The mission marks the first launch for SpaceX under NASA’s CRS-2 contract.
Credits: NASA/Tony Gray and Kenny Allen

Media accreditation is open for the launch of the next SpaceX delivery of NASA science investigations, supplies, and equipment to the International Space Station.

SpaceX’s 22nd Commercial Resupply Services mission – the second cargo resupply mission on the company’s upgraded version of its Dragon spacecraft – is targeted to launch Thursday, June 3, on a Falcon 9 rocket from Launch Complex 39A at NASA’s Kennedy Space Center in Florida.

Media prelaunch and launch activities will take place at Kennedy. Credentialing deadlines are as follows:

All media accreditation requests should be submitted online at:

Media with special logistics requests for Kennedy, such as space for satellite trucks, tents, or electrical connections, must contact Jerry Bernfeld at: jerrold.s.bernfeld@nasa.gov by Wednesday, May 12.

For questions about accreditation, please email: ksc-media-accreditat@mail.nasa.gov. For other questions, please contact Kennedy’s newsroom at 321-867-2468.

Among the investigations arriving inside the Dragon’s pressurized capsule will be a variety of research experiments, including an experimentthat could help develop better pharmaceuticals and therapies for treating kidney disease on Earth, as well as a study of cotton root systemsthat could identify varieties of plants that require less water and pesticides, and two model organism investigations. One study will look at bobtail squid as a model to examine the effects of spaceflight on interactions between beneficial microbes and their animal hosts. Another will examine tardigrades' adaptation to the harsh environment of space, which could contribute to long-term problem solving for vaccine production, distribution, and storage on Earth. Investigators also will test a portable ultrasound technology, and the first two of six new roll-out solar arrays, based on a design tested on the orbiting laboratory in 2017, will arrive in Dragon’s unpressurized spacecraft trunk.

Each resupply mission to the station delivers scientific investigations in the areas of biology and biotechnology, physical sciences, and Earth and space science. Advances in these areas will help keep astronauts healthy during long-duration space travel and demonstrate technologies for future human and robotic exploration beyond low-Earth orbit to the Moon and Mars. Space station research through the ISS National Laboratory also provides opportunities for other U.S. government agencies, private industry, and academic and research institutions to conduct microgravity research that leads to new technologies, medical treatments, and products that improve life on Earth.

This is the second SpaceX mission to deliver science investigations, supplies, and equipment for NASA under the agency’s second Commercial Resupply Services contract. Cargo resupply from U.S. companies ensures a national capability to deliver critical science research to the space station, significantly increasing NASA's ability to conduct new investigations at the only laboratory in space. SpaceX has completed 21 cargo resupply missions to and from the space station, providing more than 100,000 pounds of supplies and approximately 80,000 pounds of return mass.

The International Space Station is a convergence of science, technology, and human innovation that demonstrates new technologies and enables research not possible on Earth. Humans have occupied the space station continuously since November 2000. In that time, 244 people and a variety of international and commercial spacecraft have visited the orbiting laboratory. The space station remains the springboard to NASA's next great leap in exploration, including future missions to the Moon and, eventually, to Mars.