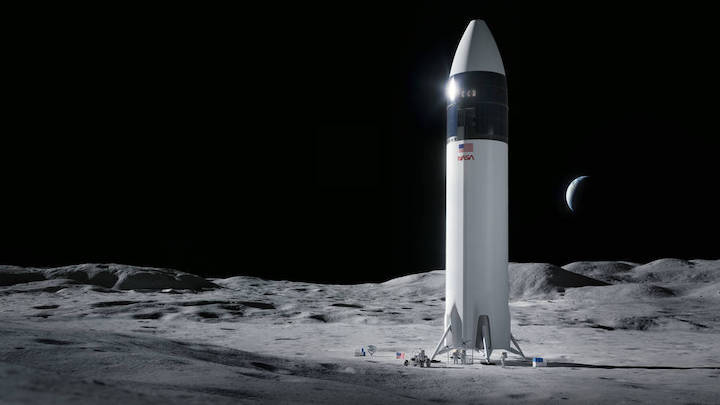 Illustration of SpaceX Starship human lander design that will carry the first NASA astronauts to the surface of the Moon under the Artemis program.
Credits: SpaceX

The agency’s powerful Space Launch System rocket will launch four astronauts aboard the Orion spacecraft for their multi-day journey to lunar orbit. There, two crew members will transfer to the SpaceX human landing system (HLS) for the final leg of their journey to the surface of the Moon. After approximately a week exploring the surface, they will board the lander for their short trip back to orbit where they will return to Orion and their colleagues before heading back to Earth.

"With this award, NASA and our partners will complete the first crewed demonstration mission to the surface of the Moon in the 21st century as the agency takes a step forward for women’s equality and long-term deep space exploration,” said Kathy Lueders, NASA's associate administrator for Human Explorations and Operations Mission Directorate. “This critical step puts humanity on a path to sustainable lunar exploration and keeps our eyes on missions farther into the solar system, including Mars.”

SpaceX has been working closely with NASA experts during the HLS base period of performance to inform its lander design and ensure it meets NASA’s performance requirements and human spaceflight standards. A key tenet for safe systems, these agreed-upon standards range from areas of engineering, safety, health, and medical technical areas.

“This is an exciting time for NASA and especially the Artemis team,” said Lisa Watson-Morgan, program manager for HLS at NASA’s Marshall Space Flight Center in Huntsville, Alabama. “During the Apollo program, we proved that it is possible to do the seemingly impossible: land humans on the Moon. By taking a collaborative approach in working with industry while leveraging NASA’s proven technical expertise and capabilities, we will return American astronauts to the Moon’s surface once again, this time to explore new areas for longer periods of time.”

SpaceX’s HLS Starship, designed to land on the Moon, leans on the company’s tested Raptor engines and flight heritage of the Falcon and Dragon vehicles. Starship includes a spacious cabin and two airlocks for astronaut moonwalks. The Starship architecture is intended to evolve to a fully reusable launch and landing system designed for travel to the Moon, Mars, and other destinations.

The HLS award is made under the Next Space Technologies for Exploration Partnerships (NextSTEP-2) Appendix H Broad Agency Announcement (BAA).

In parallel with executing the Appendix H award, NASA intends to implement a competitive procurement for sustainable crewed lunar surface transportation services that will provide human access to the lunar surface using the Gateway on a regularly recurring basis beyond the initial crewed demonstration mission.

With NASA’s Space Launch System rocket, Orion spacecraft, HLS, and the Gateway lunar outpost, NASA and its commercial and international partners are returning to the Moon for scientific discovery, economic benefits, and inspiration for a new generation. Working with its partners throughout the Artemis program, the agency will fine-tune precision landing technologies and develop new mobility capabilities to enable exploration of new regions of the Moon. On the surface, the agency has proposed building a new habitat and rovers, testing new power systems and more. These and other innovations and advancements made under the Artemis program will ensure that NASA and its partners are ready for human exploration’s next big step—the exploration of Mars.