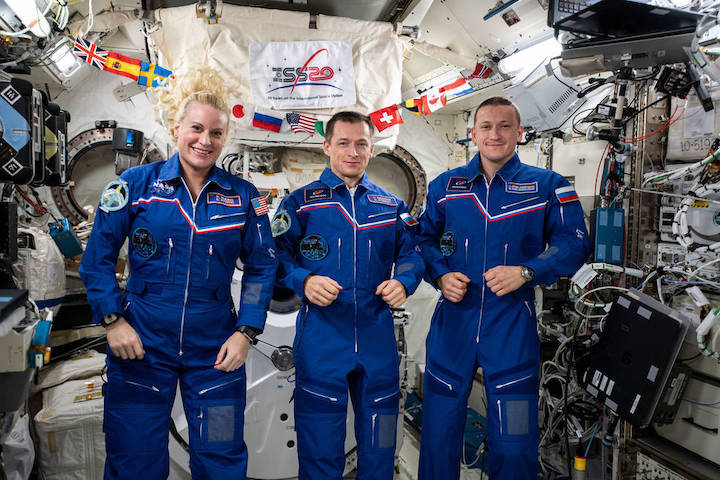 Expedition 64 Flight Engineer Kate Rubins of NASA and two Roscosmos cosmonauts are scheduled to end their mission on the International Space Station Friday, April 16. Coverage of departure from the station and landing on Earth will air live on NASA Television, the NASA app, and the agency’s website.

Rubins, along with Russian cosmonauts Sergey Ryzhikov and Sergey Kud-Sverchkov, will close the hatch to the Soyuz MS-17 spacecraft at 6:10 p.m. EDT to begin the journey back to Earth. The trio will undock from the space-facing port of the station’s Poisk module at 9:34 p.m., heading for a parachute-assisted landing at 12:56 a.m. (10:56 a.m. Kazakhstan time) Saturday, April 17, on the steppe of Kazakhstan, southeast of the remote town of Dzhezkazgan.

In advance of Soyuz departure coverage, station commander Ryzhikov will hand over command of the station to NASA astronaut Shannon Walker during a change of command ceremony. The event will air live on NASA TV, the NASA app, and the agency’s website beginning at 3:45 p.m. Thursday, April 15.

On Friday, April 16, coverage of the farewells and hatch closure for the departing crew members will begin at 5:45 p.m., followed by undocking coverage at 9:15 p.m., with coverage of the Soyuz deorbit burn and landing beginning at 11:30 p.m.

After landing, the Soyuz MS-17 crew will split up, with Rubins returning to her home in Houston, while the cosmonauts fly back to their training base in Star City, Russia. 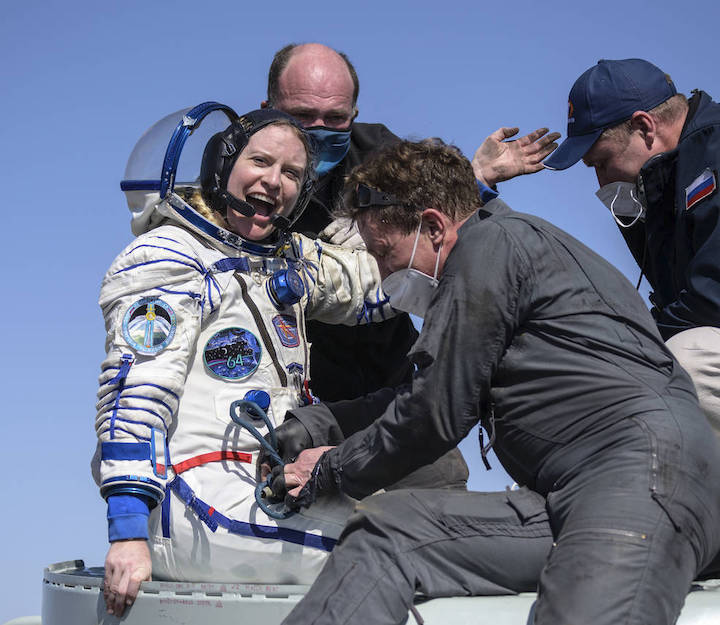 NASA astronaut Kate Rubins is helped out of the Soyuz MS-17 spacecraft just minutes after she, along with Roscosmos cosmonauts Sergey Kud-Sverchkov and Sergey Ryzhikov, landed in a remote area near the town of Zhezkazgan, Kazakhstan, on Saturday, April 17, 2021. Rubins, Ryzhikov and Kud-Sverchkov returned after 185 days in space having served as Expedition 63-64 crew members aboard the International Space Station.
Credits: NASA/Bill Ingalls

The crew departed the station in their Soyuz MS-17 spacecraft at 9:34 p.m. EDT Friday and landed safely under parachutes at 12:55 a.m. (10:55 a.m. Kazakhstan time) Saturday southeast of the town of Dzhezkazgan, Kazakhstan. It was the second spaceflight for Rubins and Ryzhikov and the first for Kud-Sverchkov.

Rubins will discuss her 185-day mission in a news conference at 3:15 p.m. Wednesday, April 21. The news conference from NASA’s Johnson Space Center in Houston will air live on NASA Television, the NASA app, and the agency’s website.

Media wishing to participate by telephone must call Johnson's newsroom at 281-483-5111 to RSVP no later than 5 p.m. Tuesday, April 20. Those following the briefing on social media may ask questions using #AskNASA.

During their mission, Rubins and her crewmates welcomed NASA’s SpaceX Crew-1 astronauts aboard the first long-duration commercial crew spaceflight. Rubins completed two spacewalks alongside NASA astronaut Victor Glover and Japanese Aerospace Exploration Agency (JAXA) astronaut Soichi Noguchi, bringing her career total to four spacewalks. She returns to Earth with a total of 300 days across her two flights, the fourth most days in space by a U.S. female astronaut.

Rubins spent hundreds of hours working on new space station experiments, building on investigations she conducted during her first mission, including heart research and multiple microbiology studies. She advanced her work in DNA sequencing, which could allow astronauts to diagnose an illness in space or identify microbes growing at the space station. Rubins collected hundreds of microbial samples at different locations within the space station for the 3DMM study to construct a 3D map of bacteria and bacterial products throughout the station. By advancing understanding of the orbiting laboratory’s microbiome, this work helps identify potential risks and supports developing countermeasures to mitigate those risks.

Rubins also worked on the Cardinal Heart experiment, which studies how changes in gravity affect cardiovascular cells at the cellular and tissue levels. Results could provide new understanding of heart problems on Earth, help identify new treatments, and support development of screening measures to predict cardiovascular risk prior to spaceflight.

Rubins, Ryzhikov, and Kud-Sverchkov’s mission began Oct. 14, 2020, when their spacecraft launched from the Baikonur Cosmodrome in Kazakhstan. Their spacecraft docked to the Earth-facing port of the Rassvet module after a two-orbit, three-hour flight.

When Rubins, Ryzhikov, and Kud-Sverchkov departed the station, Expedition 65 officially began with NASA astronaut Shannon Walkerserving as station commander, marking the first time that a Houston native has done so. Walker will lead the crew until the departure of SpaceX’s Crew Dragon Resilience on Wednesday, April 28, when command of the station will be handed over to JAXA astronaut Akihiko Hoshide.

On Thursday, April 22, the Expedition 65 crew will grow to 11 with the launch of NASA’s SpaceX Crew-2, composed of NASA astronauts Shane Kimbrough and Megan McArthur, ESA (European Space Agency) astronaut Thomas Pesquet, and JAXA’s Hoshide. Crew-2 will be the second long-duration mission to fly as part of NASA’s Commercial Crew Program, continuing to provide the capability of regularly launching humans from American soil.

In November 2020, the International Space Station surpassed a 20-year milestone of continuous human presence, providing opportunities for unique technological demonstrations and research that help prepare for long-duration missions to the Moon and Mars while also improving life on Earth. To date, 243 people from 19 countries have visited the orbiting laboratory that has hosted nearly 3,000 research investigations from researchers in 108 countries and areas.