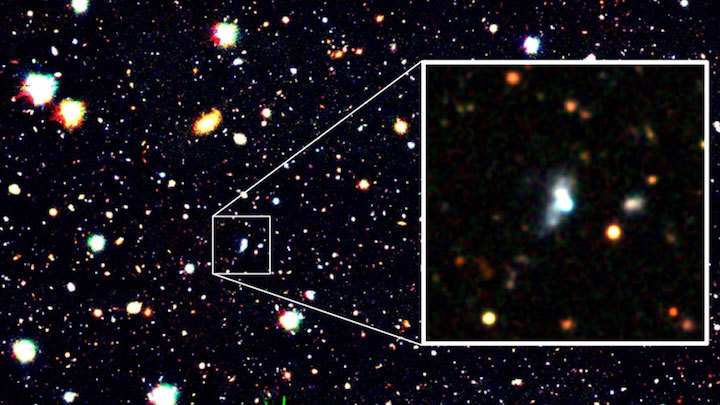 The dwarf galaxy HSC J1631+4426 (centered in inset) is the most oxygen-deprived star-making galaxy ever seen, boasting a record low oxygen-to-hydrogen ratio.

The most oxygen-poor star-forming galaxy ever found hints that the first galaxies to arise after the universe’s birth glittered with supermassive stars that left behind big black holes.

Such galaxies are rare now because almost as soon as a galaxy initiates star formation, massive stars produce huge amounts of oxygen, which is the most abundant element in the cosmos after hydrogen and helium. Astronomers prize the few such galaxies found close to home because they offer a glimpse of what conditions were like in the very early universe, before stars had made much oxygen (SN: 8/7/19).

The new galaxy’s oxygen-to-hydrogen ratio — a standard measure of relative oxygen abundance in the cosmos — is well under 2 percent of the sun’s, researchers report in a paper to appear in the Astrophysical Journal and posted online March 22 at arXiv.org.

“It is quite difficult to pick up such a rare object,” says astrophysicist Takashi Kojima, who, along with colleagues, made the discovery while he was at the University of Tokyo.

Named HSC J1631+4426, the record-breaking galaxy, found by using the Subaru Telescope in Hawaii, is 430 million light-years from Earth in the constellation Hercules. The galaxy is a dwarf, with far fewer stars to create oxygen than the Milky Way has. Those relatively few stars have given the runt just a pinch of oxygen: one oxygen atom for every 126,000 hydrogen atoms. That’s only 1.2 to 1.6 percent of the oxygen level in the sun.

“Any new galaxy is good,” says Trinh Thuan, an astronomer at the University of Virginia in Charlottesville who helped find the previous champion four years ago. “We’re counting the number of [very oxygen-poor galaxies] in the palm of our hand.” The new galaxy’s oxygen-to-hydrogen ratio is 83 percent that of the previous record holder, J0811+4730, which is 620 million light-years away in the constellation Lynx.

In HSC J1631+4426, Kojima and his colleagues also find odd abundances of another chemical element: iron. While the overall amount of iron in the galaxy is low, “we discovered that the iron-to-oxygen abundance ratio is surprisingly high,” he says.

The same pattern also appears in the oxygen-poor galaxy in Lynx. In contrast, ancient stars in the Milky Way usually have little iron relative to oxygen. That’s because newborn stars get most of their iron from the explosions of long-lived stars. Those explosions had not occurred by the time the Milky Way’s oldest stars formed. But in the two nearly pristine galaxies, the amount of iron relative to oxygen is as high as that of the sun, which acquired large amounts of both elements from previous generations of stars.

“This is a very unusual pattern, and it’s not obvious how to explain that,” says Volker Bromm, an astrophysicist at the University of Texas at Austin who was not involved with the discovery.

Just before Kojima earned his Ph.D. in 2020, he hit upon a possible explanation: High-mass stars in dense star clusters merged together to make stellar goliaths more than 300 times as massive as the sun. These superstars then exploded and showered their galactic homes with both iron and oxygen, leading to high iron-to-oxygen ratios in the two primitive galaxies as well as a source of what little oxygen exists there.

No stars this massive are known to exist in the modern Milky Way. But Kojima says their presence in the two most oxygen-poor star-making galaxies suggests that primordial galaxies had them too.

Kojima’s team sees evidence for these big black holes in the newly discovered galaxy. Gas swirling around such large black holes should get so hot it emits high-energy photons, or particles of light. Because of their high energy, these photons would tear electrons even from helium atoms, which cling tightly to their electrons, and turn the atoms into positively charged ions. Sure enough, the galaxy in Hercules emits a wavelength of blue light that comes from just such helium ions.

The record-breaking galaxy is “an exciting preview of things to come,” Bromm says. In coming years, he says, enormous telescopes will open that will find even more extreme galaxies (SN: 1/10/20). “Then we will have a wonderfully complementary way to learn about the early universe.”