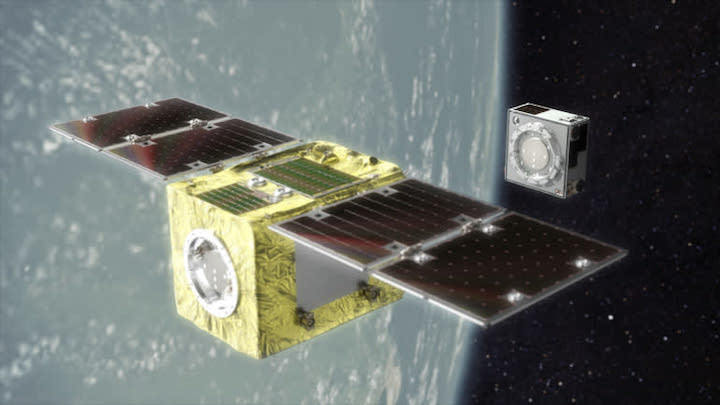 TOKYO -- Japanese startup Astroscale launched a satellite on Monday designed to usher in an era of sustainable space flight by locating and retrieving used satellites and other space junk. The six-month demonstration project is the first of its kind by a commercial satellite operator.

The Astroscale debris removal spacecraft, called the End-of-Life Services by Astroscale Demonstration, or Elsa-D, was launched on a Russian-built Soyuz rocket from the Baikonur Cosmodrome in Kazakhstan. The rocket is operated by GK Launch Services, a Russian company known for its reliability and low cost. The Elsa-D will be operated from a command center in the U.K.

The launch is a "ride-share" mission, with a payload of many satellites -- the main one from South Korea, a few belonging to Japan's Axelspace and one for Astroscale. The Astroscale satellite will separate from the rocket later on Monday.

Astroscale CEO Nobu Okada said that his engineers will be busier now: checking signals from the satellite, making sure it has the right attitude toward the Earth, activating the solar panels and so forth. The company's general manager, Miki Ito, said she is just relieved to see that the rocket was launched successfully after two days' delay.

There are an estimated 25,000 pieces of space junk in Earth orbit. This debris is created when satellites go dead, collide, or when spent rocket boosters stay in orbit instead of reentering Earth's atmosphere and burning up.

The debris is a hazard for the roughly 3,000 satellites now operating in space. It also poses a threat to the International Space Station, which has six astronauts on board.

The need for a cleanup will sharpen as more satellites are launched. Okada says that 46,000 more satellites are expected to be launched in the next 10 years, as companies like SpaceX and Amazon, both of the U.S., put up satellite internet constellations and start offering space tourism. Okada says his goal is to make Astroscale a pioneer in environmentally sustainable space flight.

"We are an environmental company," said Chris Blackerby, Astroscale's chief operating officer. "Orbit is just another natural resource, just like forests, rivers and oceans. If we don't clean it, there's going to be problems."

Astroscale was founded in 2013 by Okada, a former McKinsey & Co. consultant, who has been interested in space since he participated in a junior space camp in the U.S. at age 15. His company now has 180 employees, half Japanese and half non-Japanese, in Japan, the United States, the U.K., Israel and Singapore.

The 175 kg Elsa-D will enter orbit with 17 kg of mock debris. After spending the first couple of months getting ready for the mission, it will conduct three different test maneuvers.

Elsa-D will move toward the test debris using GPS information, estimate its exact position and analyze its motion with sensors. It will then determine a path to approach the space junk and latch onto it using a magnetic docking plate before releasing it to perform another capture maneuver.

The retrieval operation is very different from a normal docking procedure between the International Space Station and a supply ship, where two spacecraft are communicating with each other. Dead satellites and other space junk have no fuel or other means of maneuvering. They are adrift and out of control, making it harder for a cleanup satellite to catch them.

In its first maneuver, Elsa-D will gently release the test debris and then catch it. In the second, the debris is sent tumbling, requiring the spacecraft to move in sync with it. The third maneuver will simulate an actual mission, with the debris sent far away, requiring the Elsa-D to search for and locate it.

Astroscale earns revenue by selling its services to satellite operators. One of its clients is OneWeb, a satellite constellation operator. OneWeb satellites are already equipped with a Astroscale-compatible docking plate that will allow them to be towed away if they go haywire.

Astroscale is also working with the Japan Space Exploration Agency to develop a technology to collect the upper stage of a large rocket. Another projects are to develop a spacecraft that can collect several pieces of debris at once and a maintenance service for satellites in orbit.

Other companies are also working to provide space sanitation services. In Japan, Sky Perfect JSAT is looking at using lasers to alter a satellite's orbit at the end of its life and send it into the atmosphere. Swiss startup ClearSpace has been commissioned by the European Space Agency to run a debris-removal experiment in 2025.