ExoMars goes for a spin 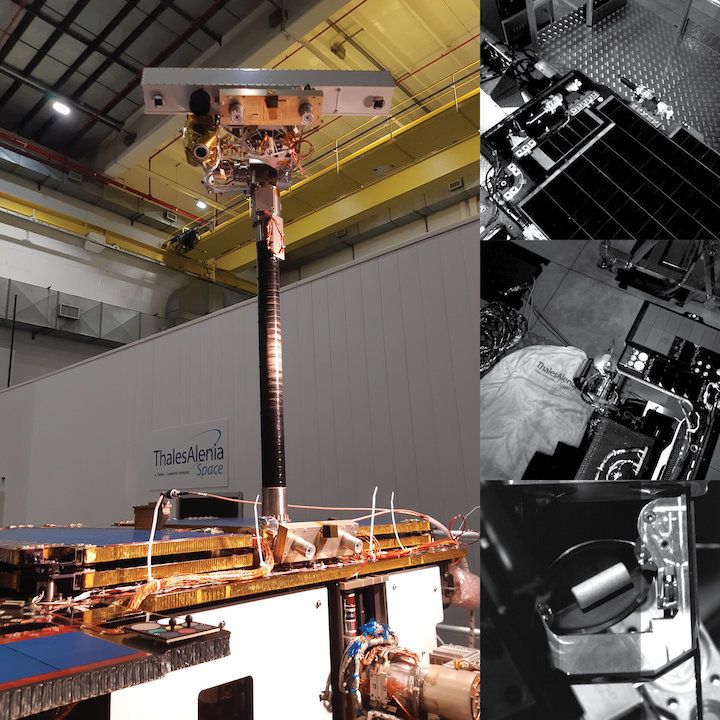 Essential preparation for the mission’s flight to Mars and plunge through the planet’s atmosphere is to ensure the spacecraft is perfectly balanced when spinning.

The ExoMars 2022 mission comprises four main units: the ESA-led Rosalind Franklin rover and Roscosmos-led Kazachok surface platform that will perform science activities on the surface of Mars, the descent module in which they are encapsulated, and the carrier module that will transport them from Earth to Mars following launch. During the cruise to Mars the complete ‘spacecraft composite’ (comprising all four units) will be spinning at about 2.75 revolutions per minute, in order to stabilise itself on its trajectory. The dynamic balancing test checks that there are no imbalances that could induce wobbles in space that would require too much fuel to compensate. It is also important that the spacecraft is balanced so that it spins smoothly around its rotation axis, to keep its antenna pointed to Earth, so that a communication link is possible.

Once the descent module is released close to Mars, about 30 minutes prior to atmospheric entry, the original spin rate is maintained until atmospheric effects take over, and when the first parachute is deployed. Complete despinning occurs once the propulsion system on the landing platform kicks in close to the surface of Mars.

Therefore, two dynamic balancing tests were conducted: one test for the complete composite spacecraft, and one without the carrier module, for the descent module with rover and platform inside. In all the tests, which were conducted at Thales Alenia Space’s cleanroom facilities in Cannes, France, the actual flight modules were used.

During the test with the spacecraft composite, the unit was subjected to a spin up to 30 rpm, corresponding to a centrifugal acceleration of 2g at the outer edge of the descent module’s heatshield.

Upon completion of the environmental testing at Cannes, the spacecraft will return to Thales Alenia Space’s facilities in Turin, Italy, mid-March, for further functional testing.

Meanwhile at the Rover Operations Control Centre (ROCC) in Turin, the Rosalind Franklin ‘ground test model’ completed an exciting milestone. While the replica rover is still stationary in the clean room, the operations team commanded it like they would when finally on the surface of Mars.

“It’s really exciting to have used for the first time the ROCC chain of commands like we will during the real mission,” says Luc Joudrier, ESA’s ExoMars rover operations manager. “We defined the rover’s ‘Activity Plan’, sent it to the rover, and afterwards ingested and processed the data. It’s great to see the ROCC working like this.”

One of the activities was to test Rosalind Franklin’s one-of-a-kind drill. It is the first time in Mars exploration that a rover will be able to retrieve soil samples down to 2 m underground, where ancient biomarkers may still be preserved from the harsh radiation on the surface, and deliver them to the onboard laboratory. In the recent exercise, the replica rover was commanded to deploy its drill with a dummy sample onboard, transporting it to the Analytical Laboratory Drawer. In reality, on Mars, a sophisticated laboratory will analyse the sample’s composition.

The rover was also commanded to image the sample with its Close-Up Imager, situated at the bottom of the drill unit.

The suite of high resolution panoramic cameras were also activated as part of an imaging calibration exercise.

Soon the twin rover will move into the ROCC’s Mars Terrain Simulation to trial mobility commands and other functional tests. Rover operators and scientists will rehearse these simulations many times and focusing on different rover activities as part of their training between now and the mission arriving on Mars.

“We have revised our strategy to give us the best chance possible in qualifying the ExoMars parachutes before the end of this year in order to meet our 2022 launch window,” says Thierry Blancquaert, acting ExoMars programme team leader. “We have therefore invited a second expert parachute manufacturer to contribute to the ExoMars programme by providing us with additional canopies to use in the upcoming opportunities.”

Unlike the one-parachute and sky-crane approach used by NASA’s Perseverance rover to land on Mars, the ESA-Roscosmos ExoMars mission requires two main parachutes – each with its own pilot chute for extraction – to help slow the descent module as it plunges through the atmosphere.

The full deployment sequence was qualified in the first high altitude drop test in 2019 that saw a drop test vehicle deployed from an altitude of 29 km via stratospheric balloon. But in the same test, significant damage to the parachute canopies were observed. This led to a redesign of the parachute bag and a revised packing strategy, together with reinforcements to both parachute canopies. The modified bags and parachutes were successfully tested in the first high speed ground-based dynamic extraction tests at NASA/JPL’s facilities in December 2019. The original damages were also successfully replicated in a series of dedicated ground-based tests at the end of last year, confirming the root causes of the observed anomalies. The canopy damages observed in the November 2020 drop test were significantly less severe than what was observed during the 2019 test, and the inspection of the test data pointed to the early inflation process for subsequent improvements.

“The new parachute canopies are stronger and more robust, and the redesigned bags have already showed promising results, so we are looking forward to finalising the logistics for the next high altitude drop test opportunity in the May-June timeframe, from Kiruna, Sweden,” says Thierry.

As well as a new bag design, a revised approach to folding tackles the problem of the parachute lines twisting upon extraction, which had previously restricted the canopies’ ability to inflate correctly.

A follow-up high altitude drop test is anticipated from Oregon, USA, in the September-November timeframe to maximize the opportunities for testing. If needed, a final opportunity could be considered in February/March 2022 from Oregon.

In the months prior to the high altitude drop tests, slots are being planned using the ground-based dynamic extraction test facility to check the performance if any changes are made to the parachutes, folding or bags prior to flying them. High altitude drop tests require complex logistics and strict weather conditions, making them difficult to schedule, while the ground tests can be repeated on a quick turnaround, buying significantly more time in the test campaign and reducing risk by allowing more tests to be conducted on a short time frame.

“We have learned valuable lessons from the current race to parachute qualification, not least the need for a more robust testing of new technologies much earlier in the mission timeline when developing such complex missions,” says Francois Spoto, ESA’s Mars Exploration Group Leader. “Together with our large industry consortium and international partners we continue to push forward to overcome the final hurdles in order to bring Europe safely to Mars.”

The ExoMars mission will launch on a Proton-M rocket with a Breeze-M upper stage from Baikonur, Kazakhstan, in the 20 September – 1 October 2022 launch window. Once landed safely in the Oxia Planumregion of Mars on 10 June 2023, the rover will drive off the surface platform, seeking out geologically interesting sites to drill below the surface, to determine if life ever existed on our neighbour planet. The ExoMars programme, a joint endeavour between ESA and Roscosmos, also includes the Trace Gas Orbiter, which has been orbiting Mars since 2016. As well as its own science mission, Trace Gas Orbiter will provide essential data relay services for the surface mission; it is already providing data relay support for NASA’s surface missions, including the arrival of the Mars 2020 Perseverance rover last month.