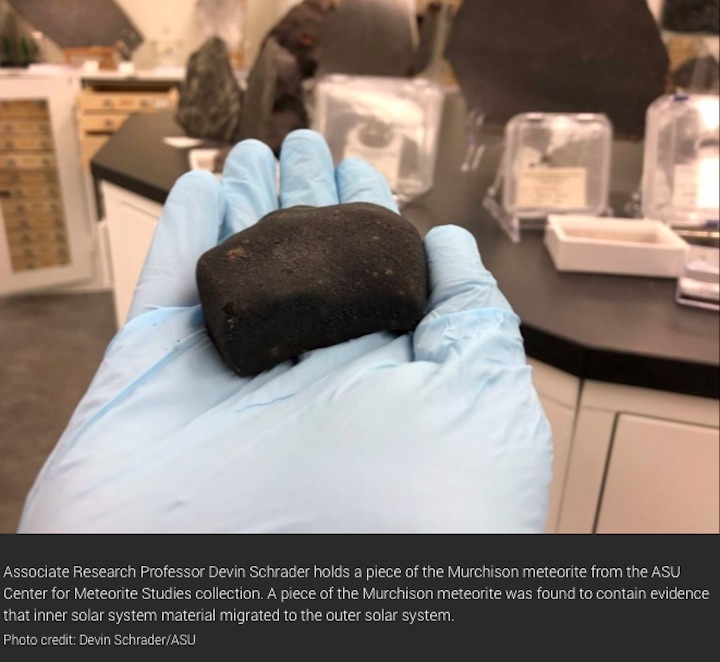 France’s ranks of amateur astronomers have been urged to help find an apricot-size meteorite that fell to Earth last weekend in the south-west of the country.

The rock, estimated to weigh 150 grams (just over five ounces), was captured plunging through the atmosphere by cameras at an astronomy education facility in Mauraux, and landed at exactly 10.43pm on Saturday near Aiguillon, about 100km (62 miles) from Bordeaux.

The site is part of the Vigie-Ciel (Sky Watch) project of around 100 cameras in the Fireball Recovery and InterPlanetary Observation Network (FRIPON), which aims to detect and collect the 10 or so meteorites that fall on France each year.

“Meteorites are relics of the solar system’s creation, with the benefit of never being exposed to the elements,” said Mickael Wilmart of the A Ciel Ouvert (Open Sky) astronomy education association that operates the Mauraux observatory.

“A fresh meteorite like this, which fell just a few days ago, hasn’t been altered by the Earth’s environment and therefore contains very precious information for scientists,” he said.

The search is already underway but calls for help have been issued on social media, and posters have been put up in areas where the rock is most likely to have fallen.

But Wilmart acknowledged that the chances of success were slim.

“It’s a bit like searching for a needle in a haystack,” he said. “We’re really counting on people to look in their gardens, or along the side of the road, they might just stumble on this rock that’s wanted so badly.”

... as you join us today from Germany, we have a small favour to ask. Through these turbulent and challenging times, millions rely on the Guardian for independent journalism that stands for truth and integrity. Readers chose to support us financially more than 1.5 million times in 2020, joining existing supporters in 180 countries.

For 2021, we commit to another year of high-impact reporting that can counter misinformation and offer an authoritative, trustworthy source of news for everyone. With no shareholders or billionaire owner, we set our own agenda and provide truth-seeking journalism that’s free from commercial and political influence. When it’s never mattered more, we can investigate and challenge without fear or favour.

Unlike many others, we have maintained our choice: to keep Guardian journalism open for all readers, regardless of where they live or what they can afford to pay. We do this because we believe in information equality, where everyone deserves to read accurate news and thoughtful analysis. Greater numbers of people are staying well-informed on world events, and being inspired to take meaningful action.

In the last year alone, we offered readers a comprehensive, international perspective on critical events – from the Black Lives Matter protests, to the US presidential election, Brexit, and the ongoing pandemic. We enhanced our reputation for urgent, powerful reporting on the climate emergency, and made the decision to reject advertising from fossil fuel companies, divest from the oil and gas industries, and set a course to achieve net zero emissions by 2030.