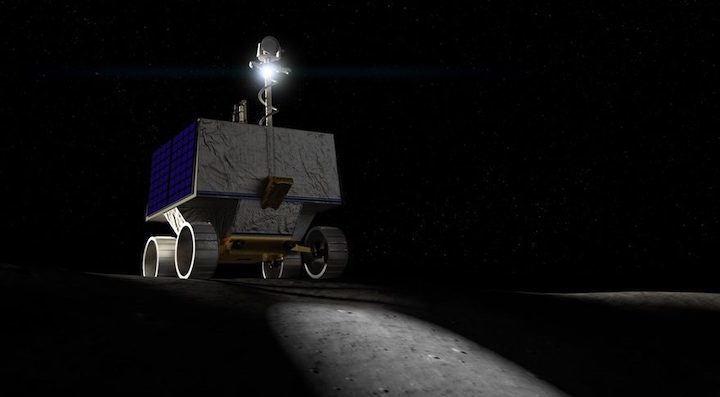 WASHINGTON — A NASA rover mission to look for ice at the south pole of the moon has passed a key review, but now costs significantly more than previously advertised.

NASA’s Volatiles Investigating Polar Exploration Rover (VIPER) mission passed its confirmation review Feb. 24, the agency said in a statement. That allows the mission to move into implementation ahead of a launch scheduled for late 2023.

“We’re now ready to finish the design and operational planning for this rover, and then start building it,” said Daniel Andrews, project manager for VIPER at NASA’s Ames Research Center, the lead center for the mission, in an agency statement.

The cost of the mission has gone up significantly. At the time NASA announced VIPER in October 2019, it projected a cost of about $250 million. As part of the confirmation review, known as Key Decision Point C, NASA set a formal cost commitment for the mission. NASA spokesperson Alison Hawkes said March 3 that the new lifecycle cost for the mission is $433.5 million.

NASA didn’t disclose the reason for the cost increase, but NASA officials said in June 2020 that they were postponing VIPER’s launch by about a year to late 2023 to change the rover’s design so it can meet the goal of operating for 100 days on the lunar surface. At the time, the agency declined to comment on VIPER’s cost.

VIPER is designed to land near the south pole of the Moon and investigate permanently shadowed regions that may have deposits of water ice. Any ice on or near the surface could be valuable resources, for life support and as propellant, for future human missions.

“Scientific data gathered by VIPER will provide insight into the origin and distribution of water on the moon, and help us prepare for human exploration by providing important information on the traversability, environment, and resources at the lunar poles,” Sarah Noble, VIPER program scientist at NASA Headquarters, said in the agency statement.

VIPER will be delivered to the moon on a commercial lander through the Commercial Lunar Payload Services (CLPS) program. Astrobotic won a $199.5 million CLPS task order in June 2020 to launch VIPER in late 2023.

VIPER is one of six CLPS missions NASA has awarded to date, including two each to Astrobotic and Intuitive Machines and individual missions to Firefly Aerospace and Masten Space Systems. At a March 1 meeting of NASA’s Planetary Science Advisory Committee, Joel Kearns, deputy associate administrator for exploration in the Science Mission Directorate, said the first two CLPS missions are still scheduled for launch late this year. An Intuitive Machines lander will reach the moon in November, launching on a SpaceX Falcon 9, while Astrobotic’s first lander, launching on United Launch Alliance’s Vulcan rocket, will arrive in December.