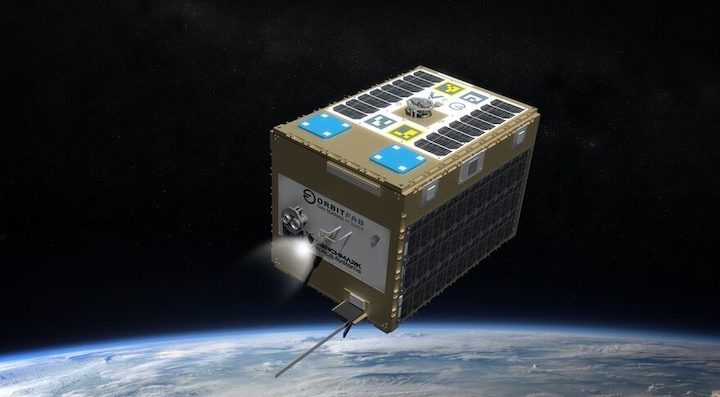 WASHINGTON — Two startups are partnering on technology that they hope can jump-start the market for in-space refueling of satellites.

Orbit Fab and Benchmark Space Systems announced Feb. 23 that they are teaming up to provide the capability to refuel Benchmark’s thrusters with hydrogen peroxide propellant provided by an Orbit Fab tanker in low Earth orbit.

That tanker spacecraft, called Tanker-001 Tenzing, will launch on a SpaceX rideshare mission later this year brokered by Spaceflight. Benchmark will test fueling that tanker on the ground before launch using an interface called RAFTI developed by Orbit Fab. That same interface will be bundled with Benchmark’s thrusters for customers seeking in-space refueling of their spacecraft.

“This was an obvious step. We wanted to make our fueling port availing to more and more customers,” Daniel Faber, chief executive of Orbit Fab, said in an interview. “It made sense to bundle these as a product offering to make it simpler for satellite integrators and satellite operators.”

Benchmark doesn’t have any of its thrusters in orbit but has several customers, including Spaceflight, which will use them on its Sherpa tug. Chris Carella, vice president of business development and strategy at Benchmark, said the company expects to have a half-dozen of its propulsion systems in orbit by the end of the year.

“All of our customers are potential Orbit Fab customers,” Carella said in an interview, but noted none had yet signed up for refueling. Among potential early users are Spaceflight for its Sherpa tug, as well as unspecified Defense Department customers who want the capability to “maneuver without regret” by being able to refuel after performing maneuvers, thus extending the life of the spacecraft.

Another example he cited was a startup planning to offer on-orbit inspection services. That company is seeking “mobility as a service” so that, rather guessing how much fuel its inspector will need to carry out its mission, Benchmark can provide refueling services through Orbit Fab’s tanker. Benchmark is considering demonstrations of rendezvous and proximity operations as part of the partnership to “prove out other pieces of the tanking operation.”

That tanker will carry a version of hydrogen peroxide called high-test peroxide (HTP), a fuel Benchmark selected because it avoids the handling challenges associated with a toxic propellant like hydrazine, but unlike other nontoxic propellants does not need “exotic materials” for its catalysts, Carella said. “We’re able to avoid a lot of costs by using hydrogen peroxide.”

HTP is not a new propellant, but he said modern varieties of the propellant are cleaner and perform better, making it more suitable for spacecraft applications. “It’s based on recent experience with new materials and manufacturing processes, paired with modern HTP synthesis,” he said.

“We have attacked that pretty directly,” Faber said. “That’s what our customers need to see to have confidence: not just the first tanker but an end-to-end full-scale trial, a demonstration of this capability in various conditions.”

“Once we’re through this, the industry will be different,” he argued, allowing companies to shift expenses from building new spacecraft to operating existing ones. “These things are going to be very common in a short time.”