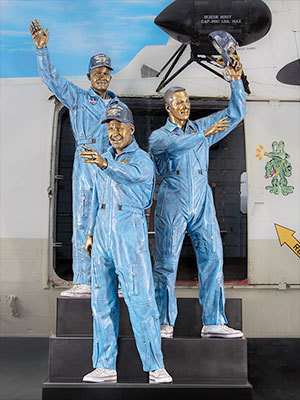 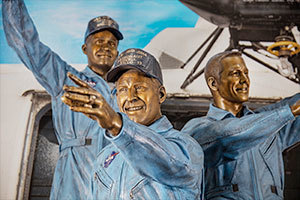 NASA's Apollo 13 crew has landed in Houston — permanently and perpetually.

James Lovell, Fred Haise and the late Jack Swigert have been immortalized as a bronze statue now on display at Space Center Houston, the official visitor center for NASA's Johnson Space Center in Texas. The life-size sculpture recreates the moment on April 17, 1970, when the three crewmates stepped out of a helicopter onto the deck of an aircraft carrier, marking their safe recovery after the "Houston, we've had a problem" ill-fated moon mission.

"Through our new Apollo 13 sculpture, we are educating the public how innovation, perseverance and true teamwork can achieve incredible success," William Harris, president and CEO of Space Center Houston said in a statement. "We thank The Grainger Foundation of Lake Forest, Illinois for their generous contribution allowing this historic moment in space exploration to be shared with the world and inspire the next generation of explorers."

Originally planned as the third U.S. mission to land astronauts on the moon, the Apollo 13 flight became one of survival after an oxygen tank explosion tore through the spacecraft's service module. Instead of landing on the moon, the lunar module was used as a lifeboat as the crew struggled with freezing temperatures and limited capabilities to return to Earth.

The sculpture's placement, in the same building that houses one of the last remaining Saturn V moon rockets, serves to honor both the Apollo 13 astronauts and the flight controllers in Mission Control at Johnson Space Center who worked around the clock for more than five days to ensure the crew's rescue.

The statue captures Lovell, Haise and Swigert in their light blue flight suits, white converse sneakers and dark blue U.S.S. Iowa Jima recovery ship ball caps. Each astronaut stands on a step descending from the helicopter, with Lovell in front looking to his right, Swigert a step up looking to his left and holding his cap and Haise waving forward from the top.

The seven-foot-tall (2-meter) statue was created by Colorado-based sculptors and brothers George and Mark Lundeen, working with fellow artist Joey Bainer. The three previously collaborated on "The Eagle has Landed," a statue of Apollo 11 astronauts Neil Armstrong, Buzz Aldrin and Michael Collins, which was installed outside of the Apollo/Saturn V Center at NASA's Kennedy Space Center in Florida for the 50th anniversary of the first moon landing in 2019. (An identical statue was erected outside Appleton International Airport in Wisconsin in 2020.)

The Apollo 13 statue is the Lundeens' second time sculpting Swigert's likeness. They previously created the late astronaut's statue that stands today in National Statuary Hall at the U.S. Capitol Building in Washington D.C. (Swigert was elected to the U.S. House of Representatives representing Colorado in 1982 but died of cancer before being able to take office.) A replica Swigert statue is on display at Denver International Airport.

Documentary filmmaker Steven Barber presented the Apollo 13 statue project to Space Center Houston and advised on its execution. The photo-realistic mural of the U.S. Navy Sea King helicopter that serves as the backdrop to the statue was created by Houston graphic designer Blake Dumesnil.

The Apollo 13 statue can be accessed by the public as part of the Rocket Park stop on Space Center Houston's NASA Tram Tour, included with admission. The sculpture is presented beside the "Apollo 13: Failure is Not an Option" exhibit, presented by JSC Federal Credit Union, which includes artifacts from the mission.

In addition to the new sculpture, Space Center Houston is also currently hosting "Apollo: When We Went to the Moon," a touring exhibit co-produced by the U.S. Space & Rocket Center, which celebrates the legacy of the Apollo-era through the experiences of the engineers and astronauts who lived through it. Open through May 2, the exhibit includes an opportunity to sit in a replica of the lunar rover and a chance to see intricate models of satellites, spacecraft and rockets, including the Russian space station Mir. 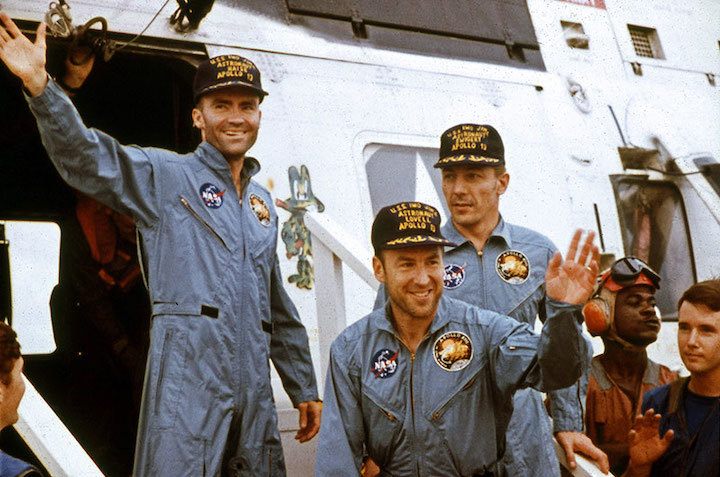 Apollo 13 astronauts Jim Lovell (at center), Fred Haise (at left) and Jack Swigert on the deck of the USS Iowa Jima aircraft carrier after splashing down from the ill-fated moon mission and being recovered by helicopter on April 17, 1970. (NASA) 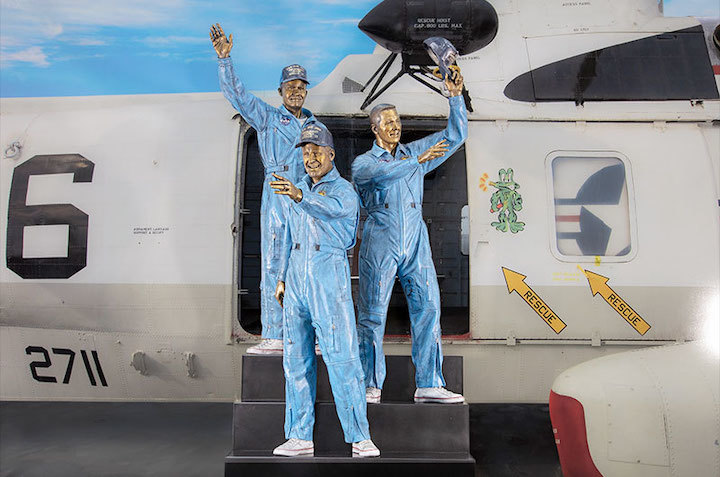