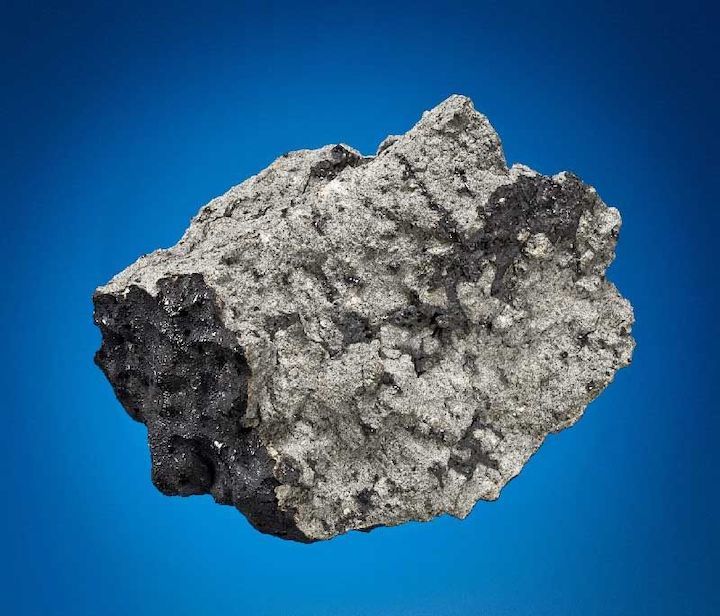 This Mars meteorite, which weighs 0.75 pounds (327 grams), landed in July 2011 as part of a shower in the vicinity of Tissint, Morocco, the location that gives the meteorite its name. A cross section of a small Aguas Zarcas fragment shows colorful clays that might include complex organic compounds. Water may have recently flowed within meteorites, suggesting the asteroids they broke off from may bear ice, a new study finds.

Water may have recently flowed within meteorites, suggesting the asteroids they broke off from may bear ice, a new study finds.

Researchers analyzed carbon-rich meteorites known as carbonaceous chondrites. These rare space rocks are one of the most ancient types of meteorites, whose parent bodies formed in the early days of the solar system. Previous research suggested that carbonaceous chondrites raining on Earth likely helped deliver water and organic matter to our newborn planet.

Prior work found that a number of minerals seen in carbonaceous chondrites likely formed due to chemical reactions involving flowing liquid water. However, scientists had thought such activity halted about 4.5 billion years ago, within the first 4 million years or so of the solar system's history.

Now, scientists in a new study have discovered signs of far more recent liquid flow within these meteorites, occurring less than a million years ago.

In this study, researchers examined carbonaceous chondrites collected from around the world. They focused on variations of the elements uranium and thorium known as isotopes. (Isotopes of an element each have different numbers of neutrons in their atomic nuclei. For instance, uranium-234 atoms are uranium isotopes with 142 neutrons, while uranium-238 atoms each have 146 neutrons.)

The levels of different uranium and thorium isotopes within these meteorites should have depended on how long the isotopes usually last before they begin to radioactively decay. Instead, the scientists found unusually high levels of the relatively short-lived isotope uranium-234, compared with longer-lived uranium-238, in all the carbonaceous chondrites they looked at. Most of the samples also had unusually high levels of uranium-238 compared with thorium-230, an isotope that results from the radioactive decay of uranium-234.

The most likely explanation for these findings, they found, was that liquid water flowed within the parent bodies of these meteorites, likely when the collisions that broke the meteorites off those carbonaceous asteroids melted ice within those rocks, the researchers said.

They think this because Uranium and thorium isotopes respond in different ways to liquid water — uranium is soluble in water, whereas thorium is not — which would explain the unusual isotope levels seen within these meteorites.

The anomalous isotope levels seen within the meteorites should disappear within a million years due to radioactive decay, the scientists noted. This suggests these meteorites possessed liquid water during that time.

All in all, this discovery suggests "these asteroids still contain ice, and that means that they could, at any time, have delivered both water and organics, which combined are critical for life," study lead author Simon Turner, an isotope geochemist at Macquarie University in Australia, told Space.com.

Previous research has detected water ice on asteroids such as Themis. "Carbonaceous asteroids might be frozen mud balls rather than rocky bodies as commonly thought," Turner said. "Our data provides strong evidence to support that."

The scientists detailed their findings in the Jan. 8 issue of the journal Science.