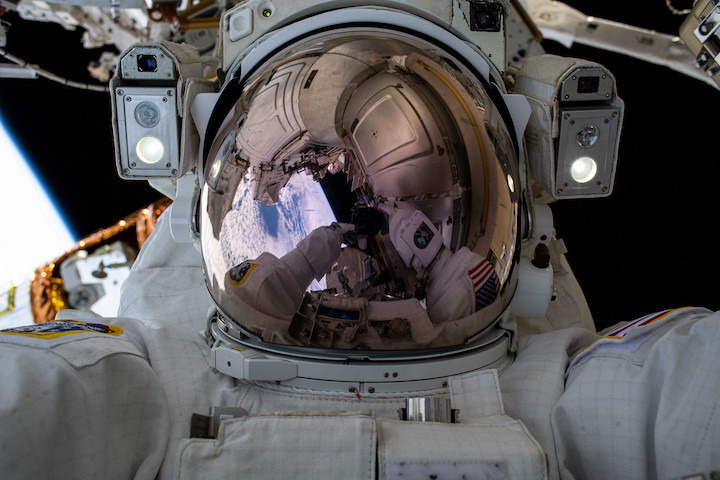 NASA astronaut and Expedition 63 Commander Chris Cassidy took this epic "space-selfie" during a spacewalk this at the International Space Station on July 21, 2020.

Two NASA astronauts are scheduled to venture outside the International Space Station Wednesday, Jan. 27, and Monday, Feb. 1, for a pair of spacewalks to finish installing a European science platform and complete long-term battery upgrade work. NASA will preview the work during a news conference at 3 p.m. EST Friday, Jan. 22, from NASA’s Johnson Space Center in Houston.

Live coverage of the preview briefing and spacewalks will air on NASA Television and the agency’s website.

Reporters who wish to participate by telephone must call Johnson's newsroom at 281-483-5111 to RSVP no later than 5 p.m. Thursday, Jan. 21. Reporters will not be invited to attend briefings in person at NASA centers due to safety restrictions related to the ongoing coronavirus (COVID-19) pandemic. Those following the briefing on social media may ask questions using #AskNASA.

News conference participants will be:

NASA Television and the agency’s website will broadcast the spacewalks with live coverage beginning at 5:30 a.m. on the day of each spacewalk. The spacewalks will begin about 7 a.m. and will last about six and a half hours.

NASA Flight Engineers Michael Hopkins and Victor Glover, who flew to the space station aboard the SpaceX Crew Dragon Resilience spacecraft, will conduct both spacewalks, which will be the 233rd and 234th in support of space station assembly, maintenance, and upgrades.

The Jan. 27 spacewalk will focus on completing cable and antenna rigging for the “Bartolomeo” science payloads platform outside the ESA (European Space Agency) Columbus module. The duo also will configure a Ka-band terminal that will enable an independent, high-bandwidth communication link to European ground stations. After completing the upgrades on the Columbus module, Hopkins and Glover will remove a grapple fixture bracket on the far port (left) truss in preparation for future power system upgrades.

The Feb. 1 spacewalk will address a variety of tasks, including installation of a final lithium-ion battery adapter plate on the port 4 (P4) truss that will wrap up battery replacement work begun in January 2017. Hopkins and Glover will remove another grapple fixture bracket on the same truss segment, replace an external camera on the starboard truss, install a new high-definition camera on the Destiny laboratory, and replace components for the Japanese robotic arm’s camera system outside the Kibo module.

These two spacewalks are scheduled to be followed by two additional spacewalks in the near future. During the third spacewalk, Glover and NASA astronaut Kate Rubins will work outside the station to prepare its power system for the installation of new solar arrays to augment the station’s existing power supply. For the fourth spacewalk, Rubins and Japan Aerospace Exploration Agency (JAXA) astronaut Soichi Noguchi will continue upgrading station components. Another briefing will be scheduled to preview the next two spacewalks after the dates are set.

For more than 20 years, humans have lived and worked continuously aboard the International Space Station, advancing scientific knowledge and demonstrating new technologies, making research breakthroughs not possible on Earth that will enable long-duration human and robotic exploration into deep space. As a global endeavor, 242 people from 19 countries have visited the unique microgravity laboratory that has hosted more than 3,000 research investigations from researchers in 108 countries and areas.