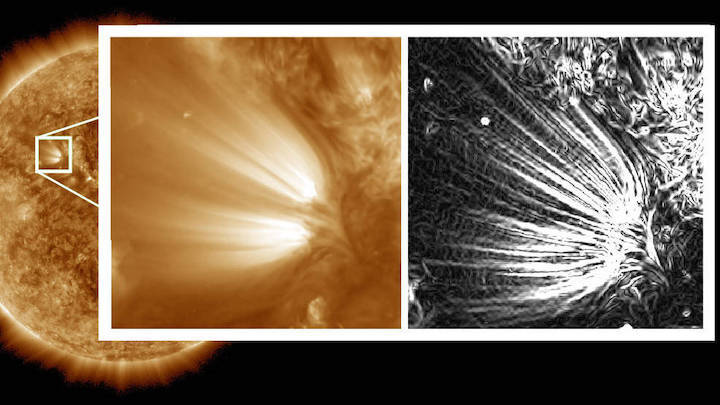 Scientists used image processing on high-resolution images of the Sun to reveal distinct “plumelets” within structures on the Sun called solar plumes. The full-disk Sun and the left side of the inset image were captured by NASA’s Solar Dynamics Observatory in a wavelength of extreme ultraviolet light and processed to reduce noise. The right side of the inset has been further processed to enhance small features in the images, revealing the edges of the plumelets in clear detail. These plumelets could help scientists understand how and why disturbances in the solar wind form.
Credits: NASA/SDO/Uritsky, et al

Scientists have combined NASA data and cutting-edge image processing to gain new insight into the solar structures that create the Sun’s flow of high-speed solar wind, detailed in new research published today in The Astrophysical Journal. This first look at relatively small features, dubbed “plumelets,” could help scientists understand how and why disturbances form in the solar wind.

The Sun’s magnetic influence stretches billions of miles, far past the orbit of Pluto and the planets, defined by a driving force: the solar wind. This constant outflow of solar material carries the Sun’s magnetic field out into space, where it shapes the environments around Earth, other worlds, and in the reaches of deep space. Changes in the solar wind can create space weather effects that influence not only the planets, but also human and robotic explorers throughout the solar system — and this work suggests that relatively small, previously-unexplored features close to the Sun’s surface could play a crucial role in the solar wind’s characteristics.

“This shows the importance of small-scale structures and processes on the Sun for understanding the large-scale solar wind and space weather system,” said Vadim Uritsky, a solar scientist at the Catholic University of America and NASA’s Goddard Space Flight Center, who led the study.

Like all solar material, which is made up of a type of ionized gas called plasma, the solar wind is controlled by magnetic forces. And the magnetic forces in the Sun’s atmosphere are particularly complex: The solar surface is threaded through with a constantly-changing combination of closed loops of magnetic field and open magnetic field lines that stretch out into the solar system.

It’s along these open magnetic field lines that the solar wind escapes from the Sun into space. Areas of open magnetic field on the Sun can create coronal holes, patches of relatively low density that appear as dark splotches in certain ultraviolet views of the Sun. Often, embedded within these coronal holes are geysers of solar material that stream outward from the Sun for days at a time, called plumes. These solar plumes appear bright in extreme ultraviolet views of the Sun, making them easily visible to observatories like NASA’s Solar Dynamics Observatorysatellite and other spacecraft and instruments. As regions of particularly dense solar material in open magnetic field, plumes play a large role in creating the high-speed solar wind — meaning that their attributes can shape the characteristics of the solar wind itself.

Using high-resolution observations from NASA’s Solar Dynamics Observatory satellite, or SDO, along with an image processing technique developed for this work, Uritsky and collaborators found that these plumes are actually made up of much smaller strands of material, which they call plumelets. While the entirety of the plume stretches out across about 70,000 miles in SDO’s images, the width of each plumelet strand is only a few thousand miles across, ranging from around 2,300 miles at the smallest to around 4,500 miles in width for the widest plumelets observed.

Though earlier work has hinted at structure within solar plumes, this is the first time scientists have observed plumelets in sharp focus. The techniques used to process the images reduced the “noise” in the solar images, creating a sharper view that revealed the plumelets and their subtle changes in clear detail.

Their work, focused on a solar plume observed on July 2-3, 2016, shows that the plume’s brightness comes almost entirely from the individual plumelets, without much additional fuzz between structures. This suggests that plumelets are more than just a feature within the larger system of a plume, but rather the building blocks of which plumes are made.

“People have seen structure in and at the base of plumes for a while,” said Judy Karpen, one of the authors of the study and chief of the Space Weather Laboratory in the Heliophysics Science Division at NASA Goddard. “But we’ve found that the plume itself is a bundle of these denser, flowing plumelets, which is very different from the picture of plumes we had before.”

They also found that the plumelets move individually, each oscillating on its own — suggesting that the small-scale behavior of these structures could be a major driver behind disruptions in the solar wind, in addition to their collective, large-scale behavior.

The processes that create the solar wind often leave signatures in the solar wind itself — changes in the wind’s speed, composition, temperature, and magnetic field that can provide clues about the underlying physics on the Sun. Solar plumelets may also leave such fingerprints, revealing more about their exact role in the solar wind’s creation, even though finding and interpreting them can be its own complex challenge.

One key source of data will be NASA’s Parker Solar Probe, which has flown closer to the Sun than any other spacecraft — reaching distances as close as 4 million miles from the solar surface by the end of its mission — captures high-resolution measurements of the solar wind as it swings by the Sun every few months. Its observations, closer to the Sun and more detailed than those from prior missions, could reveal plumelet signatures.

In fact, one of Parker Solar Probe’s early and unexpected findings might be connected to plumelets. During its first solar flyby in November 2018, Parker Solar Probe observed sudden reversals in the magnetic field direction of the solar wind, nicknamed “switchbacks.” The cause and the exact nature of the switchbacks is still a mystery to scientists, but small-scale structures like plumelets could produce similar signatures.

Finding signatures of the plumelets within the solar wind itself also depends on how well these fingerprints survive their journey away from the Sun — or whether they would be smudged out somewhere along the millions of miles they travel from the Sun to our observatories in space.

Evaluating that question will rely on remote observatories, like ESA and NASA’s Solar Orbiter, which has already taken the closest-ever images of the Sun, including a detailed view of the solar surface — images that will only improve as the spacecraft gets closer to the Sun. NASA’s upcoming PUNCH mission — led by Craig DeForest, one of the authors on the plumelets study — will study how the Sun’s atmosphere transitions to the solar wind and could also provide answers to this question.

“PUNCH will directly observe how the Sun’s atmosphere transitions to the solar wind,” said Uritsky. “This will help us understand if the plumelets can survive as they propagate away from the Sun — if can they actually be injected into the solar wind.”