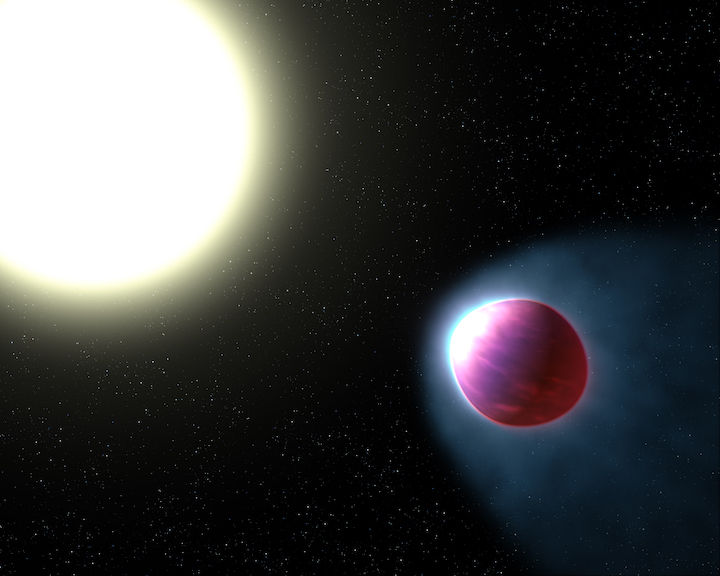 Maunakea, Hawaiʻi – “They should have sent a poet,” says Ellie Arroway in the film Contact as, suspended in outer space, she gazes upon a spiral galaxy. Almost all of the planets discovered to date (including the solar system planets) are confined to the plane of the Milky Way, unable to glimpse such a sweeping vista of our galaxy.

However, astronomers at the University of Hawaiʻi Institute for Astronomy (IfA) using the W. M. Keck Observatory on Maunakea have discovered a rocky planet with a different kind of view.

The planet orbits the star TESS Object of Interest (TOI) 561, named for the ongoing NASA TESS planet hunting mission. TOI-561 belongs to a rare population of stars called the galactic thick disk. Thick disk stars are chemically distinct, with fewer trace heavy elements (and especially less iron) than typical stars of the Milky Way, suggesting they formed early, approximately 10 billion years ago. They also have wandering motions that can lift them out of the galactic plane, providing an epic view of our own spiral galaxy.

“The rocky planet orbiting TOI-561 is one of the oldest rocky planets yet discovered. Its existence shows that the universe has been forming rocky planets almost since its inception 14 billion years ago,” says Dr. Lauren Weiss, Beatrice Watson Parrent Postdoctoral Fellow at UH IfA and leader of the team that discovered the TOI-561 planetary system.

The result was announced at a press conference today, January 11, 2021, at the January 2021 meeting of the American Astronomical Society and is published in The Astronomical Journal.

The rocky planet orbiting TOI-561 transits its star, meaning that the planet passes in front of its star as seen from Earth, blocking a fraction of the starlight. The planet is small, with a radius only one and a half times that of Earth. As a result, the reduction of light it causes is miniscule, just 0.025% of the star’s brightness.

Astronomers at UH IfA noticed this change in intensity and used Keck Observatory’s High Resolution Echelle Spectrometer (HIRES) to confirm the presence of the planet. By measuring the wobble of the star induced by the planet’s gravity, they were able to infer that the planet has three times the mass of Earth. Combining this mass with the radius determined from the transits, the team concluded that the planet is most likely rocky, perhaps with less iron than Earth.

TOI-561 has at least two other planets transiting the star, both of which have about twice Earth’s radius and are too large and low-mass to be rocky.

The origin of stars in the galactic thick disk is unclear, with some studies suggesting that they formed in a distinct, old galaxy that our younger and more massive Milky Way galaxy later cannibalized.  Alternatively, they could be some of the first stars that formed within the Milky Way.

“I wonder what view of the night sky would have been accessible from the rocky planet during its history,” says Weiss.

Illustration showing the structural components of the Milky Way galaxy. The star TOI-561 is located in the thick disk (marked in red-orange), which contains a rare, older population of stars. While nearly all known planets are found within the thin disk (marked in orange), the newly discovered rock-and-lava exoplanet orbiting TOI-561 is one of the first confirmed rocky planets orbiting a galactic thick disk star. Credit: Kaley Brauer, MIT

Although the past 10 billion years of the planet’s history are murky, it likely does not host life now. The planet orbits its star twice every Earth day, so close to its host star that the estimated average surface temperature is over 3100 degrees Fahrenheit (or about 1726 Celsius) — far too toasty for life as we know it. However, this rocky, magma planet is perhaps a harbinger of a population of rocky worlds yet to be discovered around our galaxy’s oldest stars.

The observations and analysis in this study were carried out as part of the TESS-Keck survey, a multi-institutional effort to characterize the properties of planets discovered by the NASA TESS mission.