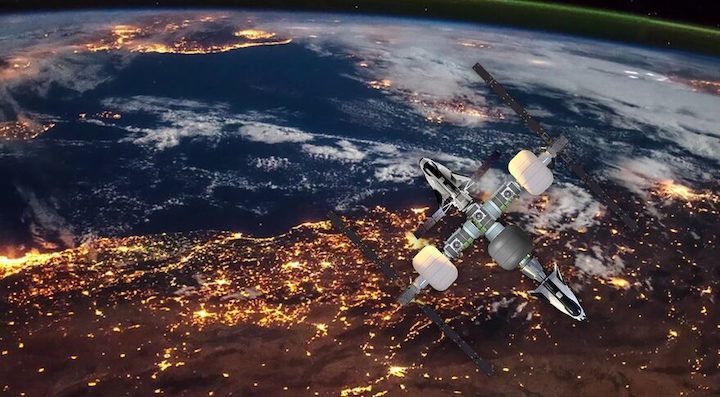 WASHINGTON — Sierra Nevada Corporation (SNC) says the first flight of its Dream Chaser spacecraft to the International Space Station is now planned for 2022 after development delays caused by the pandemic.

During a media briefing Nov. 17, SNC executives said that despite the near-term delays in assembly of the lifting-body cargo spacecraft, they were still focused on a long-term plan that includes using cargo and crew versions of Dream Chaser to support a commercial space station by the end of the decade.

The company had previously planned a first flight of Dream Chaser, the first of six under a Commercial Resupply Services contract with NASA to transport cargo to and from the International Space Station, in late 2021. But at the briefing, company officials said that mission is now scheduled for some time in 2022.

‘’COVID has definitely played a role” in that delay, said Steve Lindsey, senior vice president for strategy at SNC Space Systems. One example he gave involved structural testing of the spacecraft’s cargo module at a contractor’s facility in San Diego. COVID-related restrictions prevented SNC engineers from being on site at that facility to oversee the tests.

SNC developed a workaround by using a mission control center it developed for Dream Chaser in Colorado so those engineers could remotely oversee those tests. “That worked great. Unfortunately, it took probably three or four times as long as it should have,” he said.

A related problem, he said, involves suppliers who have had to suspend operations because of COVID-19 outbreaks at their facilities. There have also been technical challenges with Dream Chaser, although he did not go into details about specific issues. “All of those things have conspired to move the date a little bit,” he said.

Lindsey wasn’t more specific about a launch date other than some time in 2022. A specific date, he said, will depend on both when the vehicle is ready as well as NASA’s “traffic model” for visiting vehicles, which include Dream Chaser as well as other cargo and crew spacecraft.

In addition to its NASA cargo contract, the company continues to seek other customers for the vehicle while retaining the option for a crewed version. “There is a lot of interest out there. There’s a lot of folks watching our progress,” he said. “We believe the market demand is out there.” He didn’t identify any customers beyond the United Nations’ Office for Outer Space Affairs, which previously announced an agreement with SNC for a Dream Chaser mission that would carry experiments from member countries.

SNC is looking to move beyond Dream Chaser to commercial space stations that could be supported by cargo and crewed versions of Dream Chaser. Janet Kavandi, the company’s new executive vice president for space systems, showed an illustration of a space station incorporating inflatable modules the company has been developing as part of NASA’s Next Space Technologies for Exploration Partnerships program.

“This is our vision for the future,” she said. “We have visions for how to build platforms in space that can be built commercially” for use in applications ranging from scientific research to tourism.

Company officials didn’t go into depth about their plans for a commercial station, but Kavandi billed it as an “easy transition” from the ISS. Lindsey suggested the company will pursue a future NASA solicitation to provide funding for a commercial space station, one that has been on hold in part because of a lack of funding for the agency’s overall low Earth orbit commercialization plans.

Those NASA plans foresee a gradual transition by the agency from the ISS to commercial platforms. Lindsey said he expected the ISS to operate to 2028 or 2030, by which time commercial successors like that proposed by SNC will be in place to handle research activities currently done on the ISS. “I think the timeframe will be the end of the 2020s, going into 2030, when that happens,” he said. 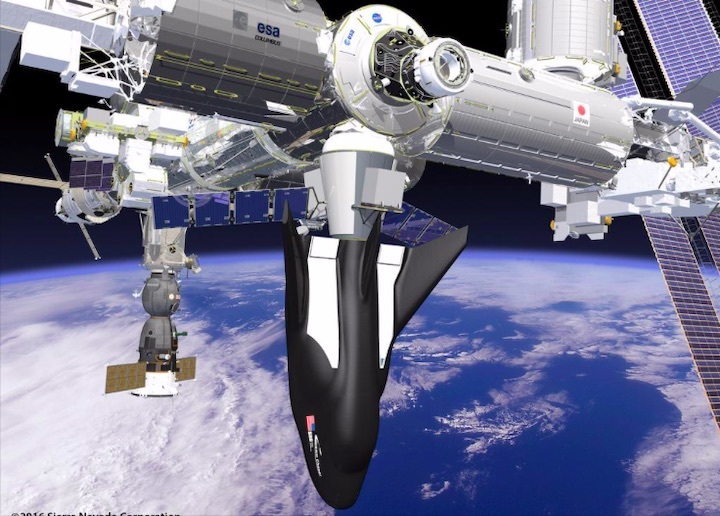 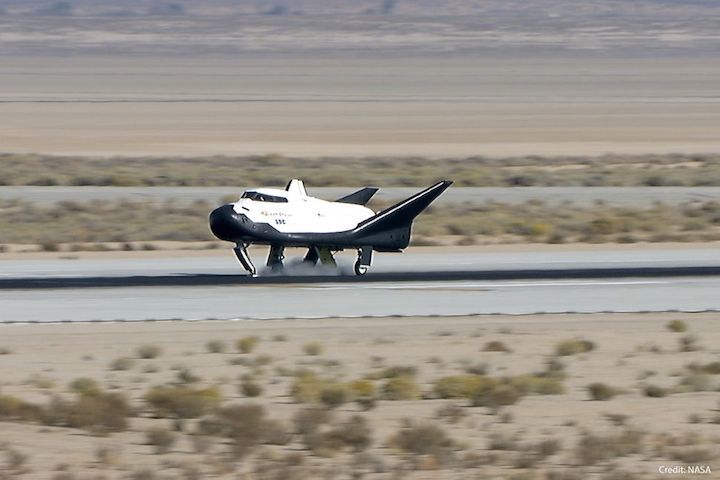 Dream Chaser is capable of touching down on any runway that can welcome a Boeing 737.
(Image: © Sierra Nevada Corp.)

Delays related to the ongoing coronavirus pandemic have pushed back the anticipated flight date of Sierra Nevada's Dream Chaser space plane to 2022.

Dream Chaser is one of the NASA-selected cargo vehicles that, once it begins to fly, will resupply the International Space Station (ISS), along with SpaceX's Dragon and Northrop Grumman's Cygnus capsules. But even as the space plane's launch is delayed, its parent company continues to aim towards sending humans to the moon and, eventually, Mars.

"We've got this vision of the future here with our technology that we're already creating," Neeraj Gupta, director of programs for Sierra Nevada Corporation's Advanced Development Group, said during a November press conference. "What we really see is this kind of vibrant, bustling commercial space economy developing."

Dream Chaser is a cornerstone of that vision, Gupta said. Another key element is the Large Inflatable Fabric Environment (LIFE) habitat, a three-story structure capable of housing explorers on the moon or Mars for up to 90 days.

Dream Chaser was supposed to make its first of six flights transporting cargo for NASA to and from the ISS late this year. But during the briefing, Sierra Nevada said delays have pushed the launch back to 2022.

"This has been a trying year with the COVID restrictions and quarantines," Steve Lindsey, senior vice president for strategy at Sierra Nevada Corporation Space Systems, said at the same event. Pandemic conditions have forced the company, like many others, to seek out creative solutions to continue meeting deadlines.

"We're going to keep fighting through the COVID challenges, get this thing built, and we're going to get it flown as soon as we can do so safely," Lindsey said.

Sierra Nevada has not announced when in 2022 Dream Chaser will attempt to make its first flight, but Lindsey described how pandemic restrictions prevented engineers from being on site for structural testing of the cargo model. Instead, engineers remotely oversaw the tests from a mission control center in Colorado. While the workaround allowed testing to continue, it took three or four times as long as it should have, Lindsey said.

Other delays came from supplier shutdowns due to COVID-19 outbreaks. Technical challenges not related to the pandemic also caused problems, though Lindsey did not elaborate. "All of those things have conspired to move the date a little bit," Lindsey said.

Dream Chaser is designed to make trips into space more accessible by landing on any runway that can welcome a Boeing 737 aircraft. The reusable spacecraft is also fairly modular, allowing it to accommodate a wide range of cargo that would be easily accessible soon after landing.

Sierra Nevada currently holds a NASA contract for a minimum of six missions to the ISS, and those missions are the primary pushfor the Dream Chaser team right now, Lindsey said. But the space plane was designed to be far more accommodating.

"When you're going to do something commercial like we're trying to do, you have to take the long view, and that starts with your design," Lindsey said.

Although the company remains committed to the ISS, they are also searching for other potential customers. "We believe that the market demand is out there," Lindsey said. The company's biggest success on that path to date is the United Nations, which in 2019 announced its plan to allow Dream Chaser to carry experiments from member countries, planned for 2024.

While the first Dream Chaser plane, named Tenacity, is currently moving towards its final stages, a second vehicle is also currently in production, Lindsey said. Both vehicles are built to endure 15 missions.

The company is also considering a crewed version of Dream Chaser, although it does not yet have a contract for such a vehicle. A crewed ship would be very similar to the cargo plane, with seating and life support added, as well as an abort system, which would allow astronauts to quickly and safely escape during an emergency.

And a human-ready version remains an important part of the Dream Chaser vision, Lindsey said. "We will never lose our drive to eventually make this vehicle crewed," he said.

A 'skyscraper for space'

Even as Sierra Nevada faces delays with Dream Chaser, it continues to press on toward creating a space environment. The LIFE habitation, originally one of five concepts considered by NASA for its Artemis program architecture, is an inflatable living structure that can be used in orbit or on the surface of a moon or planet.

"It's basically a skyscraper for space," Gupta said.

The inflatable habitat starts out compact enough to fit inside an 18-foot (5.40 meter) rocket fairing, eventually expanding to a 27 by 27 foot (8 by 8 m) fabric building.

"We can launch this on a commercially available launch vehicle today," Gupta said.

The habitat extends the amount of time humans can stay on the surface of the moon, to at least 90 days, and potentially longer.

"The first step is getting people there, the first woman and next man to the surface of the moon," Gupta said. "But the next piece is staying there."

But while the outpost is currently aiming for the moon, Mars remains in its sights. Gupta said the habitat's ability to expand from a small package is a plus for long journeys to the Red Planet, when space will be at a premium.