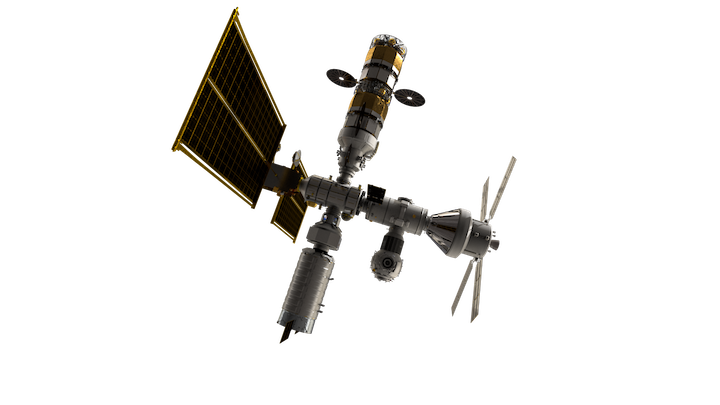 ESA signed a contract today with Thales Alenia Space to start building the European module for the lunar Gateway that will provide the new human exploration facility with communications and refuelling.

The Gateway is being built by the partners of the International Space Station and will enable sustainable exploration around – and on – the Moon, while allowing for space research and demonstrating the technologies and processes necessary to conduct a future mission to Mars.

The European System Providing Refueling, Infrastructure and Telecommunications, or ESPRIT, will be a cylindrical module with space for astronauts to work in, much like an International Space Station module. It will include an observatory offering 360° views of the Moon and spacecraft as they dock with the lunar outpost.

ESPRIT will consist of two main elements: a system to provide data, voice and video communications from the Gateway to the Moon and a refueling module that will provide the Gateway with xenon and chemical propellants. The refueling element will ensure Gateway has fuel for maintaining its orbit as well as supporting future reusable lunar landers and further deep space transport.

The communications element is under fast-track development for launch in 2024 – mounted on the first US Gateway module, named HALO – while the refueling module will be ready for launch in 2026. The contract is worth 296.5 million Euros and will see the module being built by Thales Alenia Space in Cannes, France, in a joint effort with Thales Alenia Space in Italy and the United Kingdom.

“Development of the Gateway is accelerating thanks to this new contract and European expertise,” says David Parker, ESA’s Director of Human and Robotic Exploration. “In just a few years we will witness humankind – including European astronauts – working together in orbit around the Moon and supporting surface exploration.  Coming on top of our existing contributions to Orion and the recent contract for the International Habitation module, I-Hab, Europe is now a core partner in Artemis, contributing to lunar transportation, infrastructure, technology and science.”

The Gateway is part of the Artemis programme to go forward to the Moon. It builds on the exemplary collaboration between space agencies over more than two decades of flying astronauts to the International Space Station. The foundations for the ESPRIT module are based on the experience of designing, building and operating existing Space Station elements flying 400 km above Earth. Now this capability will be extended one thousand times further into space.

“This contract further cements Thales Alenia Space as a leader in designing and building human spaceflight pressurised structures. Our team is already responsible for more than half the volume of the International Space Station and we will now be working on most of the Gateway modules, including ESA’s International Habitation module and providing the primary structure for NASA’s Habitation and Logistics Outpost (HALO) in partnership with Northrop Grumman. The company is also involved in the Axiom commercial space station by providing the two first modules”, says Massimo Claudio Comparini, Senior Executive Vice President Observation, Exploration and Navigation at Thales Alenia Space..

French ESA astronaut Thomas Pesquet is returning to the International Space Station later this year to live for six months in modules that form the basis for the Gateway design. He is training extensively for his second mission, called Alpha, and is excited by the prospect of future missions to the Moon.

"I am thrilled that Europe is on a direct track for the Moon, and I am happy that France capitalises on its expertise to build critical hardware! With ESA having secured participation of European astronauts on three flights to the Gateway, I hope that in the not-too-distant future I will be one of them, working with the ESPRIT module and using its hardware to communicate with the Moon. The foundations for this are being built right now in Cannes, where I was an engineering intern at the very beginning of my career! "

Jean-Yves Le Gall, president of France’s space agency CNES shares this sentiment. “We are pleased to see that the next generation of human exploration hardware is being built in France; the design and building of this module is an international project that will have its roots in Cannes.

“The future for human space exploration is bright and we are eagerly looking forward to the discoveries and other benefits it brings back to Earth.”