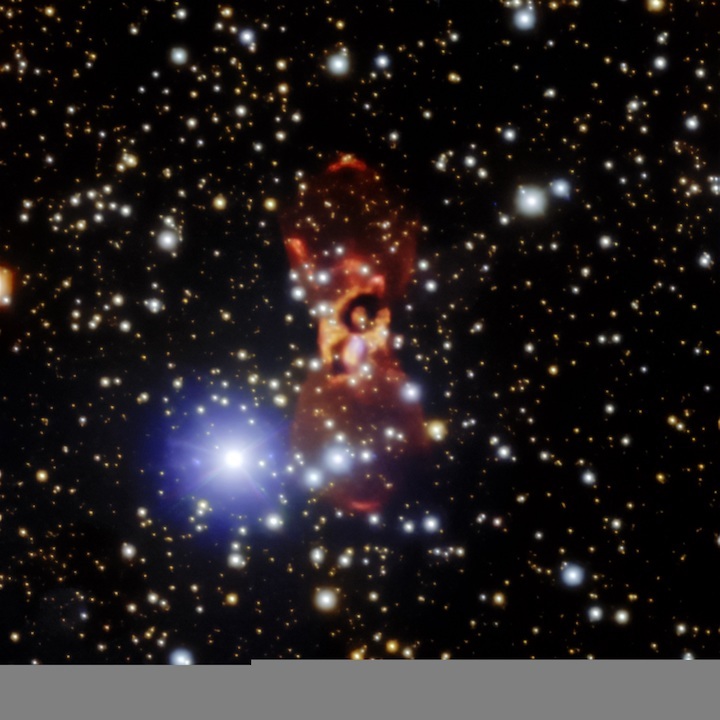 CK Vulpeculae seen with Gemini North. The enigmatic CK Vulpeculae nebula. The team of astronomers measured the speeds and changes in positions of the two small reddish arcs about 1/4 of the way up from the bottom and 1/4 of the way down from the top to help determine that the nebula is expanding five times faster than previously thought. Credit: International Gemini Observatory/NOIRLab/NSF/AURA. Image processing: Travis Rector (University of Alaska Anchorage), Jen Miller (Gemini Observatory/NSF's NOIRLab), Mahdi Zamani & Davide de Martin

An international team of astronomers using Gemini North’s GNIRS instrument have discovered that CK Vulpeculae, first seen as a bright new star in 1670, is approximately five times farther away than previously thought. This makes the 1670 explosion of CK Vulpeculae much more energetic than previously estimated and puts it into a mysterious class of objects that are too bright to be members of the well-understood type of explosions known as novae, but too faint to be supernovae.

350 years ago, the French monk Anthelme Voituret saw a bright new star flare into life in the constellation of Vulpecula. Over the following months, the star became almost as bright as Polaris (the North Star) and was monitored by some of the leading astronomers of the day before it faded from view after a year [1]. The new star eventually gained the name CK Vulpeculae and was long considered to be the first documented example of a nova — a fleeting astronomical event arising from an explosion in a close binary star system in which one member is a white dwarf, the remnant of a Sun-like star. However, a string of recent results have thrown the longstanding classification of CK Vulpeculae as a nova into doubt.

In 2015, a team of astronomers suggested that CK Vulpeculae’s appearance in 1670 was the result of two normal stars undergoing a cataclysmic collision. Just over three years later, the same astronomers further proposed that one of the stars was in fact a bloated red giant star, following their discovery of a radioactive isotope of aluminum in the immediate surroundings of the site of the 1670 explosion. Complicating the picture even further, a separate group of astronomers proposed a different interpretation. In their paper, also published in 2018, they suggested that the sudden brightening in 1670 was the result of the merger between a brown dwarf — a failed star too small to shine via thermonuclear fusion that powers the Sun — and a white dwarf.

Now, adding to the ongoing mystery surrounding CK Vulpeculae, new observations from the international Gemini Observatory, a Program of NSF’s NOIRLab, reveal that this enigmatic astronomical object is much farther away and has ejected gas at much higher speeds than previously reported.

This team, led by Dipankar Banerjee of Physical Research Laboratory Ahmedabad, India, Tom Geballe of Gemini Observatory, and Nye Evans of Keele University in the United Kingdom, initially planned to use the Gemini Near-Infrared Spectrograph (GNIRS) instrument on Gemini North on Hawai‘i’s Maunakea to confirm the 2018 detection of radioactive aluminum at the heart of CK Vulpeculae [2]. After realizing that detecting this in the infrared would be far more difficult than they originally thought, the astronomers improvised and obtained infrared observations across the full extent of CK Vulpeculae, including the two wisps of nebulosity at its outermost edges.

“The key to our discovery was the GNIRS measurements obtained at the outer edges of the nebula,” elaborated Geballe. “The signature of redshifted and blueshifted iron atoms detected there shows that the nebula is expanding much more rapidly than previous observations had suggested.” [3]

As lead author and astronomer Banerjee explains further, “We did not suspect that this is what we would find. It was exciting when we found some gas traveling at the unexpectedly high speed of about 7 million km/hour. This hinted at a different story about CK Vulpeculae than what had been theorized.”

By measuring both the speed of the nebula’s expansion and how much the outermost wisps had moved during the last ten years, and accounting for the tilt of the nebula on the night sky, which had been estimated earlier by others, the team determined that CK Vulpeculae lies approximately 10,000 light-years distant from the Sun — about five times as far away as previously thought. That implies that the 1670 explosion was far brighter, releasing roughly 25 times more energy than previously estimated [4]. This much larger estimate of the amount of energy released means that whatever event caused the sudden appearance of CK Vulpeculae in 1670 was far more violent than a simple nova.

“In terms of energy released, our finding places CK Vulpeculae roughly midway between a nova and a supernova,” commented Evans. “It is one of a very few such objects in the Milky Way and the cause — or causes — of the outbursts of this intermediate class of objects remain unknown. I think we all know what CK Vulpeculae isn’t, but no one knows what it is.”

The visual appearance of the CK Vulpeculae nebula and the high velocities observed by the team could help astronomers to recognize relics of similar events — in our Milky Way or in external galaxies — that have occurred in the past.

“It is difficult at this stage to offer a definitive or compelling explanation for the origin of the 1670 eruption of CK Vulpeculae,” concluded Banerjee. “Even 350 years after Voituret’s discovery, the nature of the explosion remains a mystery. ”

[1] 17th-century astronomers who observed the bright new star CK Vulpeculae included distinguished Polish mayor, brewer, and astronomer Johannes Hevelius and the French-Italian astronomer Giovanni Domenico Cassini, who discovered four of Saturn’s moons. After it faded from view in 1671 there were numerous unsuccessful attempts through the intervening centuries to recover it, some by noted astronomers including Halley, Pickering and Humason.

[2] A spectrograph is an instrument that splits light from an astronomical object into its component wavelengths, allowing the composition of the gas emitting the light, its speed, and other traits to be measured.

[4] The brightness of an object is inversely proportional to the square of the distance from an observer. In the case of CK Vulpeculae, if the 1670 explosion occurred five times as far away it must have been 52 = 25 times as bright.