With NASA, ESA, Russia and China all researching lunar living, we look into the challenges and advantages of building a Moon base.

These ordinary words have an extraordinary significance: they are thought to be the last words spoken by a human being on the Moon.

That was in December 1972, when the departing Apollo 17 mission brought down the curtain on three years of daring and audacious manned space exploration during which 12 people left their historic footprints in the lunar dust.

But for the past four decades our nearest neighbour has been without human contact, explored only by the robotic sentinels we’ve dispatched.

That may be about to change, at least if Johann-Dietrich Woerner, the Director General of the European Space Agency (ESA), gets his way – he wants to build a village on the Moon!

Other space agencies around the world, including NASA and the Russian agency, Roscosmos, have been making similar noises too. So could we finally be about to enter the era of a permanent human presence on the Moon?

Stage 1: Travelling to the Moon

First things first: the less you take with you the better.

It costs at least $10,000 to launch just 1kg of material into space, and that’s before you’ve even got it into lunar orbit and landed it on the Moon.

“The big buzzword at the moment is ‘in situ resource utilisation’ or ISRU,” says University of Westminster astrobiologist Prof Lewis Dartnell. 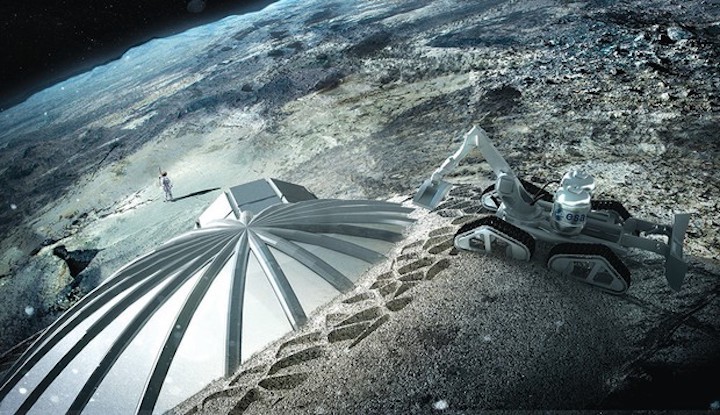 In other words, use what’s already there as much as possible to keep the costs down. Therefore, local resources will govern where the base should be located.

Woerner’s idea is to start building on the far side of the Moon – the face that always points away from Earth. China also thinks this would be the best location.

It would certainly be a good place to install telescopes, but the downside is that you’d need a system of relay satellites to maintain contact with Earth – a key psychological factor as it’s important not to feel too cut off.

Plus, if you’re thinking purely in terms of resources, then close to the south pole of the Moon might be a better bet for an initial dwelling as there’s plenty of water ice there as well as other minerals.

The Russians are currently looking into the feasibility of a base at Malapert Mountain in this region.

The other upside to the south pole is the climate. The Moon is a very different place to the Earth, taking nearly a month to complete one rotation on its axis. So on most parts of the Moon, periods of day and night both last around two weeks.

However, some regions of the Moon’s south pole are almost always illuminated, much like the our North Pole in summer.

This means there aren’t huge changes in temperature, therefore allowing solar panels to soak up plenty of sunlight with which to power a potential lunar colony. If at first a manned lunar colony seems like too much of a risk, we might start with a robot-only base.

That’s certainly the plan that Jaxa, the Japanese Space Agency, has in the pipeline.

It hopes to have a permanent robotic enclave on the Moon by 2020, with machines gathering lunar samples up to 97km (60 miles) away before returning to the base and blasting their haul back to Earth via rockets.

Stage 2: Building a Moon base 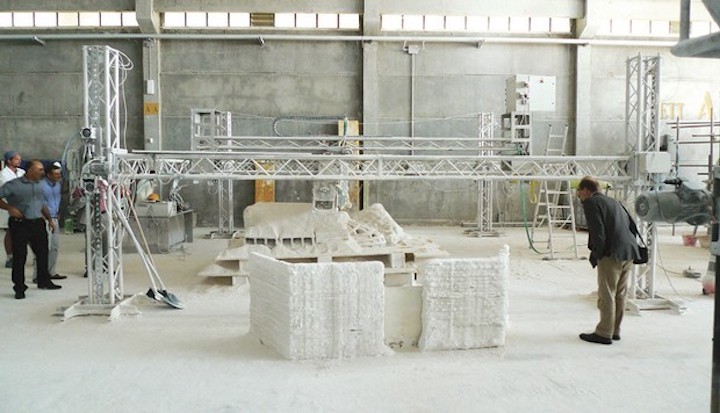 The 3D printer builds the moon base, layer by layer © ESA / Foster & Partners

The advent of 3D printing could be a game-changer. At the end of 2014, the design for a socket wrench was emailed to astronauts on the International Space Station (ISS), who then used their 3D printer to create it.

Researchers are excited by the prospect of using a similar technique for bases on the Moon.

ESA is already in consultation with architects Foster + Partners about the possibility of creating a large-scale infrastructure on the Moon by 3D printing it using lunar soil as the raw material.

“We’ve already demonstrated that 3D printing can be a very efficient tool and that it is possible to process lunar regolith [loose material],” says Laurent Pambaguian, Materials Technology Engineer at ESA. 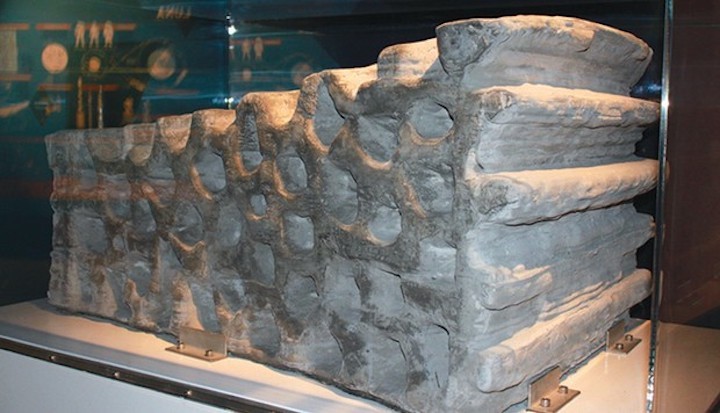 It remains to be seen how the regolith would be collected in sufficient quantities and delivered to the printer, and Pambaguian warns of the need for an initial robotic mission to ensure the system works in the Moon’s reduced gravitational field.

But should it be successful, in an emergency a key piece of equipment could be designed, transmitted to the Moon and printed within hours – much faster than the days it would take to dispatch it by rocket. 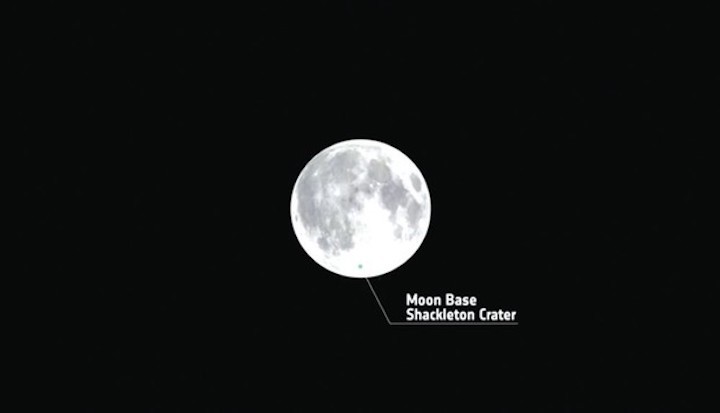 The Moon’s south pole gets light for 90 per cent of the day, making it the best location © ESA / Foster & Partners

In the concept by Foster + Partners, material would be 3D printed onto a light, inflatable scaffold.

However, Bigelow Aerospace proposes the use of a small standalone inflatable pod and is already cooperating with NASA. Their first inflatable Moon bases will be in place by 2025, they say.

The Russian plan to colonise Malapert Mountain is also being led by a private company – Lin Industrial.

It believes the technology required for such a feat isn’t available now, but predicts it will be in as little as five years. A total of 50 rocket launches would make the base a reality, but at a cost of nearly $10bn. 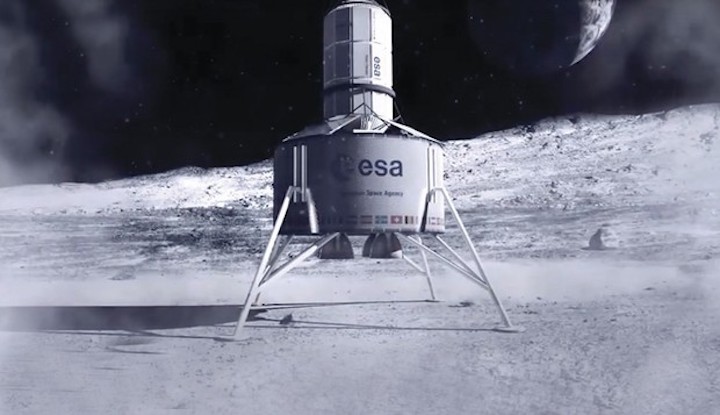 Stage 3: Living on the Moon

When it comes to our fragile frames, the Moon presents a number of biological problems. Humans evolved to live on Earth, not a barren lump of rock over 380,000km (240,000 miles) away.

We’d need to test out the effects of altered gravity on our biology too. “Zero gravity is totally devastating to the human body in terms of muscle wastage and the demineralisation of the skeleton,” says Dartnell.

On the Moon, the gravity is only one-sixth of what we’re used to. “We don’t know if that’s strong enough for the human body to remain healthy,” he adds. 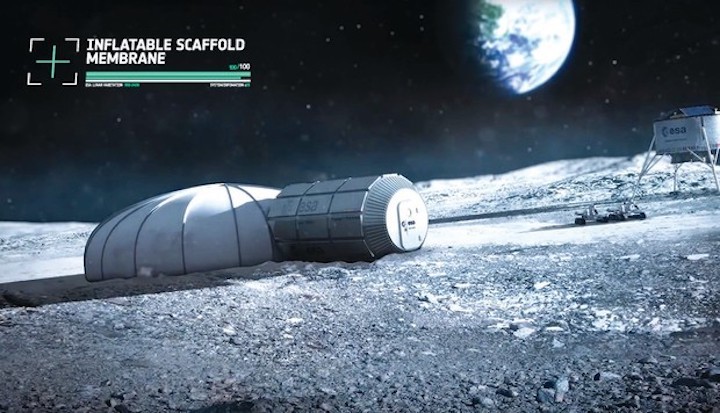 Another key challenge colonisers will face is radiation. The Earth has an atmosphere and a magnetic field, both of which act as giant safety blankets protecting us from solar particles and cosmic rays from the Galaxy at large.

With no natural protection from these dangers on the Moon, we’ll have to find a way to shield ourselves. Otherwise radiation will penetrate the astronauts’ skin and dump its energy into their DNA, leading to radiation sickness, cataracts and a much higher risk of cancer. 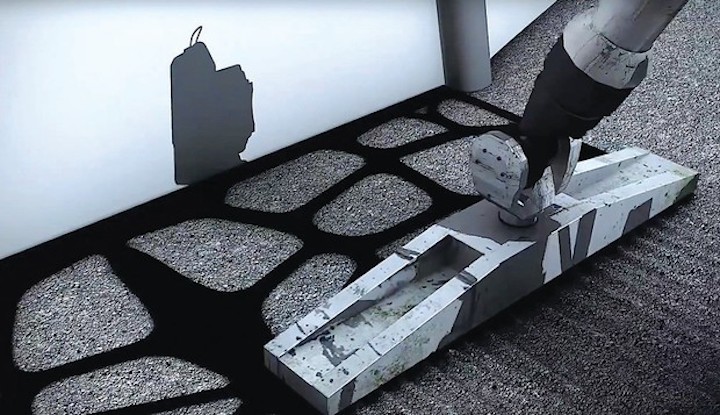 The radiation shield would need to be a couple of metres thick. “You’ll need some form of lunar JCB, which you’d use to bury your habitat in material from the lunar regolith,” says Dartnell, sticking to the ISRU mantra.

That’s enough to soak up the radiation before it reaches those living inside. The other essentials are water, oxygen and food. Luckily, the water ice present on parts of the Moon can supply the first two through melting the ice and splitting the H2O up to get at the oxygen.

Food will likely come from indoor greenhouses growing fresh fruit and vegetables, something Dartnell believes will have importance beyond simple sustenance.

“With Antarctica, even really simple things like growing tomatoes have been shown to be enormously beneficial for keeping people sane,” he says. 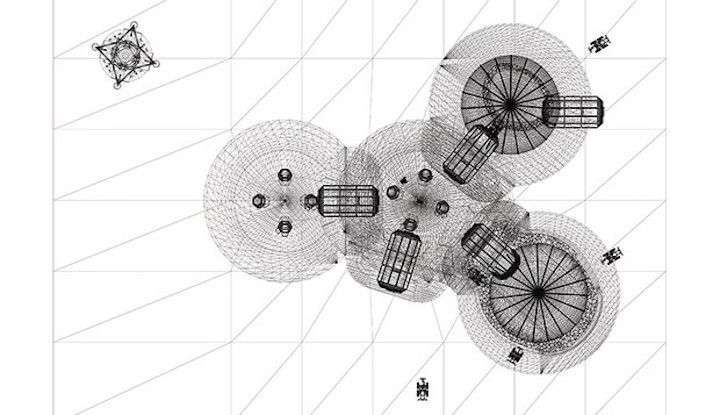 That psychological angle shouldn’t be forgotten. The first inhabitants of a lunar colony are likely to be very small in number – the Russians, for example, plan to start with two people before boosting it to four.

Working in a pressurised, cramped and alien environment takes its toll on the psyche. Lessons can be learnt from previous experiments, like the trips to the ISS and the Mars500 project, in which volunteers were locked away in isolation to recreate a potential trip to the Red Planet.

What we can learn

The scientific attraction is clear. The lunar samples returned to Earth by the Apollo astronauts have been an invaluable resource in understanding the inner workings and history of our celestial companion.

Yet that knowledge is still limited, as only a small amount of material was returned from a few lunar locations. A team of permanent dwellers would send our ability to study the Moon into overdrive.

“A good comparison is how a permanent human infrastructure in Antarctica has facilitated scientific research that wouldn’t have happened if we just parachuted in automatic payloads from time-to-time,” explains Prof Ian Crawford, a planetary scientist from Birkbeck, the University of London. 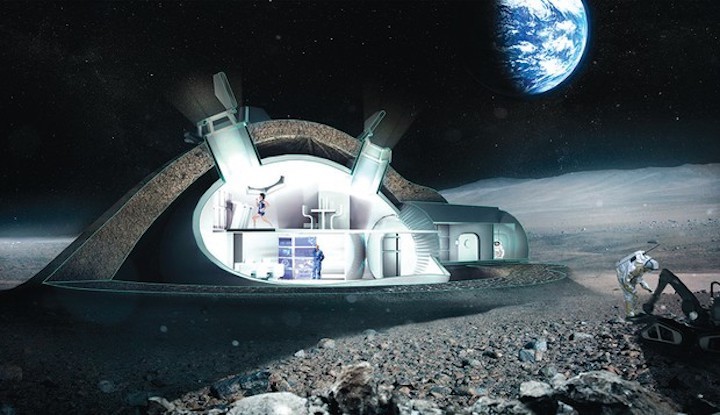 A 3D printed shield protects from radiation and debris while the pressurised living area can house four people. Skylights give the moonbase some much needed daylight and the original capsule acts as an airlock and tech support module with communications and other equipment © ESA / Foster & Partners

Interestingly, lunar habitation could extend our knowledge of areas far beyond the Solar System – the Moon has long been regarded as an excellent place to build telescopes to peer out into the distant cosmos.

Optical telescopes would have an unprecedented view of the centre of our Milky Way and radio telescopes would be free from the ever-increasing background hum of modern civilisation. Humans could be sent to build and service this suite of instruments, much as they do with the mountain-top telescopes on Earth.

With so many untapped resources, the first Moon base may not be funded by government-led space agencies at all – private enterprise could be first to set up shop. A recent NASA study suggested that a public-private partnership could slash the cost of the mission by 90 per cent.

With eyes also on a permanent Mars colony, the Moon would be an excellent place to test out nascent technologies. It’s certainly a lot safer – if things go wrong it only takes a few days to head for Earth’s safety. Alternatively, emergency supplies could be couriered quickly to the lunar surface. An outpost on Mars would be far more remote, leaving anyone in a colony there at least six months from help.