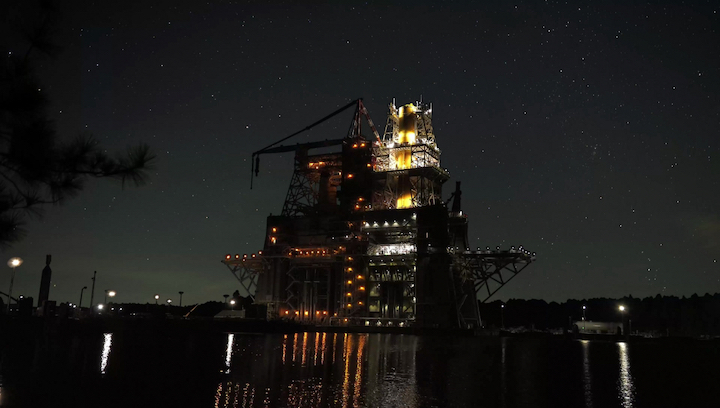 NASA’s Space Launch System (SLS) Program rescheduled the final two tests that will culminate the Core Stage Green Run campaign for December after successfully repairing one of the liquid hydrogen (LH2) prevalves inside the engine section of the stage.

The Artemis 1 core stage flight article is installed in the B-2 Test Stand at the Stennis Space Center in Southern Mississippi for the Green Run design verification campaign.

An intermittent failure of the LH2 prevalve for engine four was discovered during previous Green Run testing and after troubleshooting and partial disassembly, analysis narrowed the problem down to a clutch mechanism on the valve. Following the surgical clutch replacement, the fully-reconstructed valve assembly passed retesting and Core Stage prime contractor Boeing is now working to pick up preparations for the first of the two final critical tests: a Wet Dress Rehearsal (WDR) to prepare for a subsequent full-duration test firing of the stage.

NASA reported on November 18 that in-place repairs of the engine four LH2 prevalve in the Core Stage were successful. An intermittent issue with the operation of the prevalve interrupted the stage’s Green Run test campaign, delaying the final two of eight test cases while the problem was identified and resolved.

“The team designed an innovative tool to remove and replace the valve’s faulty clutch while the core stage remained in the B-2 test stand, and without removing the entire valve.”

Preparations to perform the last two tests in late October and mid-Novemberwere suspended when the prevalve failed a focused checkout procedure in mid-October. Following a few weeks of troubleshooting, fault tree analysis narrowed down the suspect to the clutch mechanism within the overall prevalve assembly. Engineers worked in cramped quarters inside the Core Stage’s engine section to do the troubleshooting and repairs.

The manifold has openings for feedlines to flow propellant to each of the four engines and for a fill and drain line to load the tank from ground supplies during the countdown prior to engine ignition. The prevalves control the flow of LH2 from the tank through feedlines directly to the LH2 inlet of each of the four RS-25 engines. 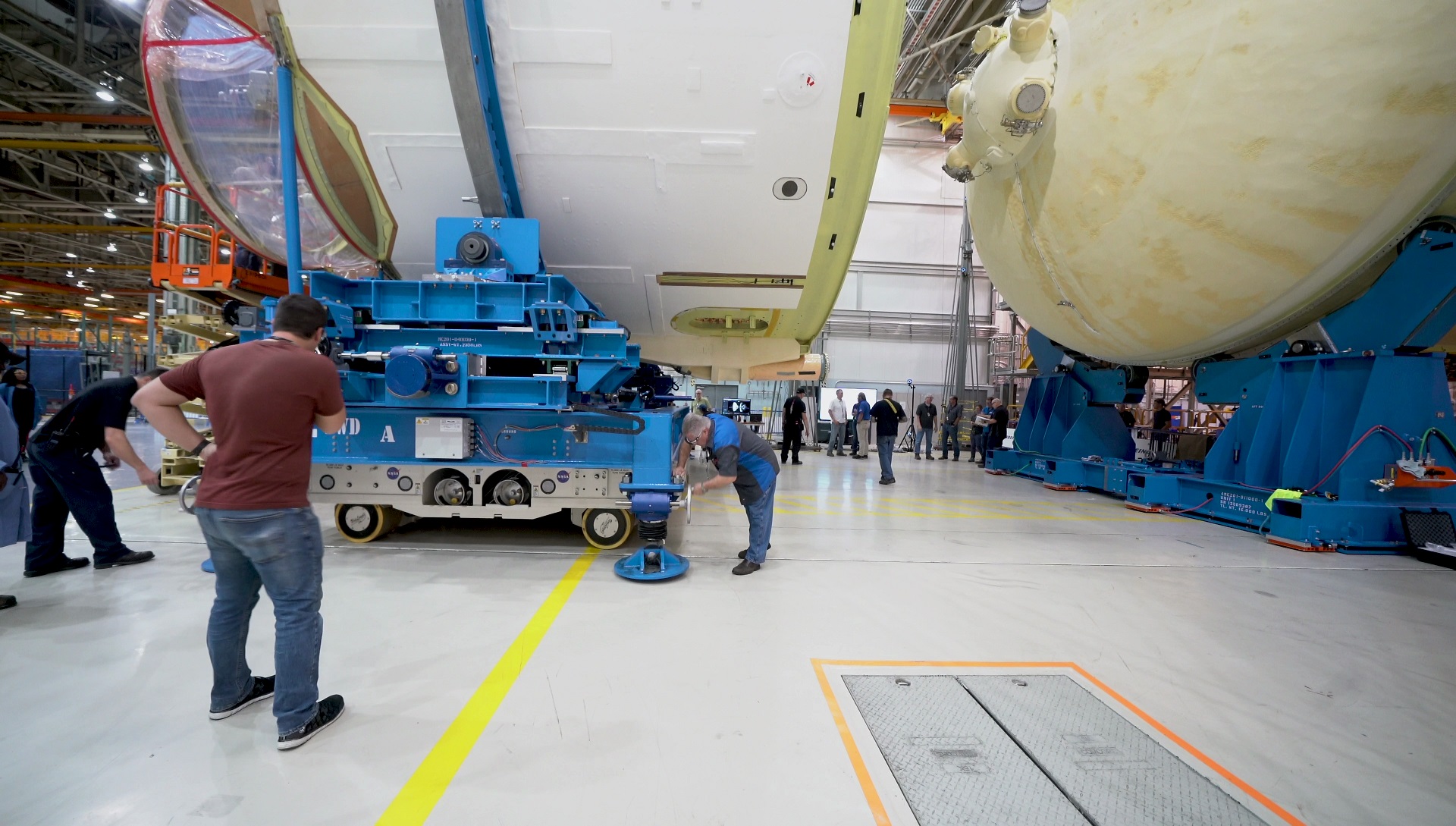 (Photo Caption: The four LH2 prevalves on Core Stage-1 can be seen sticking out of the LH2 tank aft manifold in the upper right part of this image taken in September, 2019, at Michoud Assembly Facility during operations to mate the engine section (left) to the bottom of the hydrogen tank (right). A suspect clutch mechanism in one of the valves was recently repaired from inside the engine section with the stage installed vertically in the B-2 Test Stand.)

Engineers for Boeing and prevalve vendor Vacco had to position themselves on an erector set style work platform installed for access inside the engine section. The cryogenic propellant lines in the engine section are insulated with foam, including the valves, so that had to be removed during troubleshooting to be able to disassemble parts of the valve.

Working in shifts around the clock, the intricate repair of the valve required disassembling enough of the surrounding mechanism to remove the suspect clutch and replace it with a new unit. The valve was repaired with the overall housing remaining bolted in-place inside the aft compartment, so subassemblies like the actuator had to be removed to get to the clutch. As noted in NASA’s blog post, special tooling was built to help support the prevalve repair work.

Following the part replacement, engineers then had to rebuild the internal prevalve mechanisms with the valve in its operational rocket position and orientation, as opposed to on a work bench in a well-lighted work area. Performing the repair in place helped to limit the scope of necessary rework and time it would take to do all that work.

While the prevalve repairs and retesting were being performed, an issue with the stage’s thrust vector control (TVC) system was still being discussed within the program. Test case five performed a checkout of the Core Stage Main Propulsion System (MPS) and RS-25 engines late in the Summer which included a test of the TVC systems for all four engines. 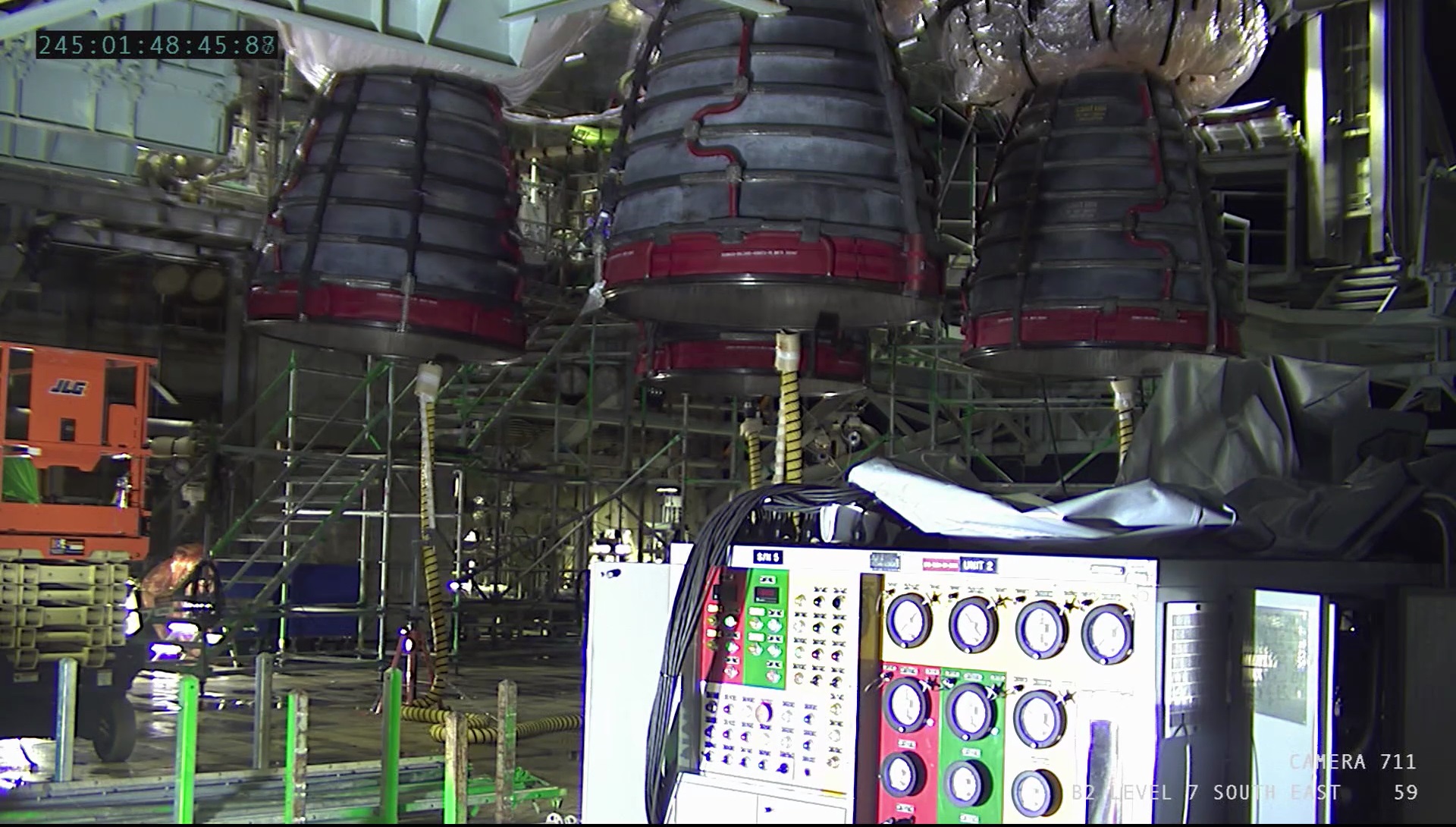 (Photo Caption: One of the RS-25 Core Stage engines is swung outwards by the stage’s hydraulically-powered TVC system in a gimbal test performed on August 31. Data from the TVC testing performed during Green Run test case five is still being discussed, but the issue is not holding up plans to run the final two test cases in December.)

In flight the Core Stage moves the four RS-25 engines for steering using hydraulic power; each engine has two TVC actuators connected to it, a pitch and a yaw actuator. The stage’s hydraulic system provides the power to drive all eight TVC actuators in addition to controlling the position of critical valves in the RS-25 engines for start and shutdown along with controlling engine thrust levels.

There still seems to be a disagreement between different sets of instrumentation and models of the TVC system performance during the tests. There was also some discussion about performing additional TVC testing on the Core Stage and in the TVC lab at the Marshall Space Flight Center in Huntsville, Alabama.

With NASA and Boeing moving ahead towards the final Green Run tests in December, the issue doesn’t appear to be a showstopper to the new schedule for finishing the Stennis campaign; however, careful positioning of the engines by the stage TVC system is a crucial element of the Hot-Fire test. While the engines are firing in the static ground test they must be positioned to minimize lateral forces imparted from the stage to the test stand, including the structural attachments and the umbilical connections between the stage and the stand.

Ground control and vehicle computers are both monitoring the position of the engines during the Hot-Fire test and a misalignment could cause the test-firing to be aborted. 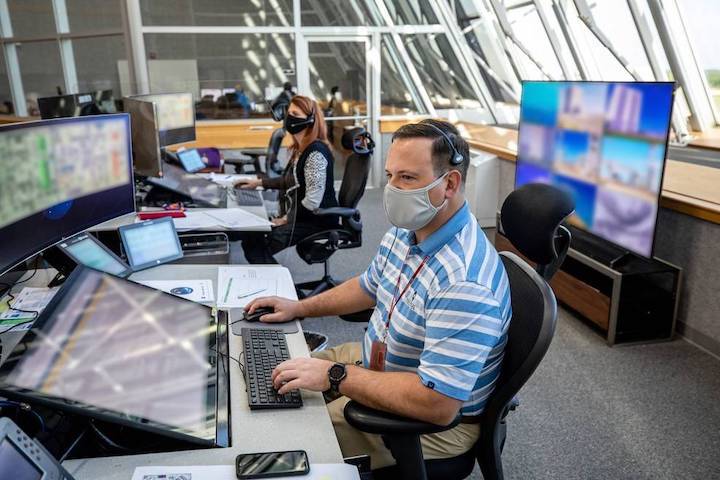 Charlie Blackwell-Thompson, at left, NASA Artemis launch director; and Wes Mosedale, technical assistant to the launch director, monitor a cryogenic propellant loading simulation inside Firing Room 1 in the Launch Control Center on Nov. 2, 2020, at NASA’s Kennedy Space Center in Florida. A team of engineers with Exploration Ground Systems and Jacobs, members of the cryogenics launch team, are rehearsing the steps to load the super-cooled liquid hydrogen and liquid oxygen into the Space Launch System’s (SLS) core and second stages to prepare for Artemis I.
Credits: NASA/Kim Shiflett 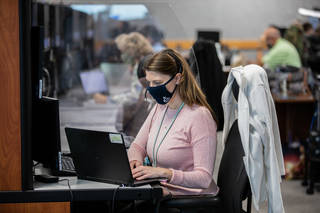 Amanda Arrieta, a member of the cryogenics launch team, participates in a cryogenic propellant loading simulation inside Firing Room 1 in the Launch Control Center on Nov. 2, 2020, at NASA’s Kennedy Space Center in Florida.
Credits: NASA/Kim Shiflett

NASA’s Space Launch System (SLS) rocket will propel the Orion spacecraft on a journey beyond the Moon and back to Earth during an uncrewed flight test known as Artemis I. Well before liftoff, a group of engineers will be inside the Launch Control Center at NASA’s Kennedy Space Center in Florida, where they will monitor the loading of cryogenic liquid hydrogen and liquid oxygen – super-cooled fuels – into the rocket.

To test this all-important tanking process, engineers from NASA’s Exploration Ground Systems and contractor Jacobs recently took their seats at consoles in Kennedy’s Firing Room 1. During a simulated launch, they tackled any challenges that arose and monitored the system’s performance.

“The [cryo] team always brings their ‘A’ game,” said Charlie Blackwell-Thompson, NASA Artemis launch director at Kennedy. “During these loading simulations, they demonstrate that they will be ready on launch day.”

Diane Stees, an engineer and former chief of the cryogenic propulsion console during the shuttle program, serves as the NASA lead for the Cryogenic Propulsion Ground and Flight Application Software Team. The software team has 20 members with a mix of seasoned and newer engineers.

Challyn Pfifer, a Jacobs cryogenic liquid hydrogen software technical lead, is one of the newer engineers. She sits on console for the liquid hydrogen team, which oversees loading the rocket and continuously monitors the system through launch.

“It’s an amazing honor and experience to be part of the next generation of space launches with the Artemis program; to be paving the way for future aerospace engineers who dream of launching rockets,” Pfifer said. “It’s also an uplifting experience to see more and more women get involved in the space program. I take great pride knowing I am a part of something bigger than myself.”

She added that the Artemis program benefits from having experienced engineers who launched space shuttles as well as new engineers who offer a different outlook and way of approaching the tasks at hand. 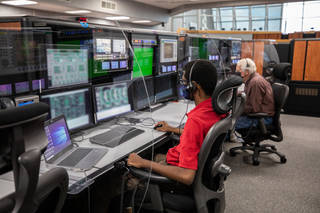 One of the experienced engineers is John Sterritt. He began his career with Rockwell International in October 1979 as a main propulsion systems engineer and worked on every space shuttle launch. Now a senior engineer and cryogenic propulsion launch system specialist with Jacobs, he transitioned to the SLS rocket in March 2013 and works closely with the hazardous gas detection system engineers.

“It’s always exciting to bring a new rocket online and bring some of that shuttle knowledge forward,” Sterritt said.

Sterritt monitors the internal volumes of the core and interim cryogenic propulsion stages, including the engines, propulsion systems, and tank interfaces, to verify that the detected levels of hydrogen, oxygen, and helium do not pose a threat to the rocket or spacecraft. In addition, Sterritt ensures the team takes appropriate actions if the levels exceed the prescribed limits for launch.

Ed Sikora, a propulsion specialist with the Jacobs team, also brings his Space Shuttle Program knowledge to the SLS team. Sikora arrived at Kennedy in May 1982 and supported 132 space shuttle flights. In 2015, he started writing ground systems requirements, working on the software, and participating in launch simulations in the firing rooms.

With more ground support equipment for Artemis than there was for the Space Shuttle Program, Sikora said it helps engineers working in the firing rooms to know how the hardware interfaces with the software when you push the button.

“It humbles me,” Sikora said. “We’re playing a part in putting astronauts back on the Moon and getting ready for human exploration of Mars.”