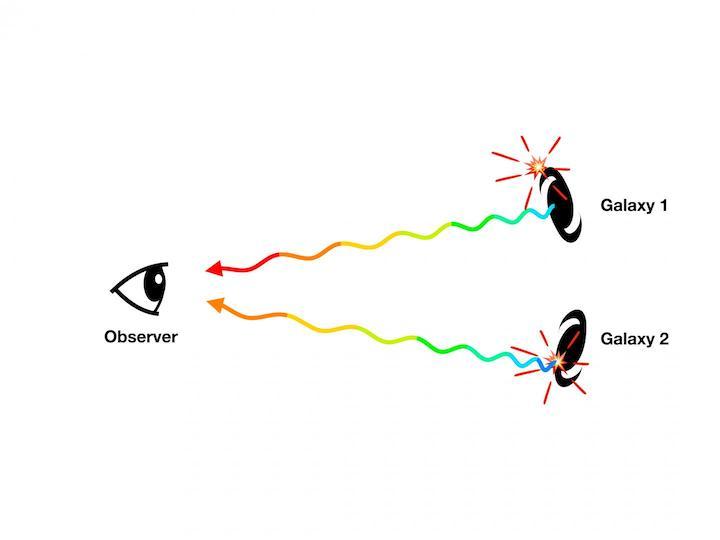 In both observations the redshift is measured from the clarity of the supernova. But in observation 2 (Galaxy 2) the measurement is made on the ejecta from the explosion. The measurements on Galaxy 2 become more uncertain since we don't know exactly in each case how fast the explosion ejects the material. Never the less it is still made in order to obtain as much data as possible.

Ever since the astronomer Edwin Hubble demonstrated that the further apart two galaxies are, the faster they move away from each other, researchers have measured the expansion rate of the Universe (the Hubble constant) and the history of this expansion. Recently, a new puzzle has emerged, as there seems to be a discrepancy between measurements of this expansion using radiation in the early Universe and using nearby objects. Researchers from the Cosmic Dawn Center, at the Niels Bohr Institute, University of Copenhagen, have now contributed to this debate by focusing on velocity measurements. The result has been published in Astrophysical Journal.

The researchers at the Cosmic Dawn Center found that the measurements of velocity used for determining the expansion rate of the Universe may not be reliable. As stated in the publication, this doesn't resolve the discrepancies, but rather hints at an additional inconsistency in the composition of the Universe.

Measuring the expansion rate of the Universe

Currently, astronomers measure the expansion of the Universe using two very different techniques. One is based on measuring the relationship between distance and velocity of nearby galaxies, while the other stems from studying the background radiation from the very early universe. Surprisingly, these two approaches currently find different expansion rates. If this discrepancy is real, a new and rather dramatic reinterpretation of the development of the Universe will be the consequence. However, it is also possible that the difference in the Hubble constant could be from incorrect measurements. It is difficult to measure distances in the Universe, so many studies have focused on improving and recalibrating distance measurements. But in spite of this, over the last 4 years the disagreement has not been resolved.

In the recent scientific article, the researchers from the Cosmic Dawn Center now attempt to shine light on a related problem: the measurement of velocity. Depending on the velocity with which a remote object moves away from us, its light shifts to redder colors. With this so-called redshift it is possible to measure the velocity from a spectrum of a remote galaxy. Unlike measurements of distance, until now it was assumed that velocities were relatively easy to measure.

However, when the researchers recently examined distance and velocity measurements from more than 1000 supernovae (exploding stars) collected during the last 25 years, they found a surprising discrepancy in their results. Albert Sneppen, Masters student at the Niels Bohr Institute explains: "We've always believed that measuring velocities was fairly straightforward and precise, but it turns out that we are actually dealing with two types of redshifts".

The first type, measuring the velocity with which the host-galaxy moves away from us, is considered the most reliable. The other type of redshift measures instead the velocity of matter ejected from the exploding star inside the galaxy. Or, more precisely, the matter from the supernova moving towards us with a few percent of the velocity of light (illustration 1). After compensating for this extra movement the redshift - and velocity - of the host galaxy can be determined. But this compensation requires a precise model for the explosion. The researchers were able to determine that the results from these two different techniques result in two different expansion histories for the Universe, and therefore two different compositions as well.

Are things "broken in an interesting way?"

Associate professor at the Niels Bohr Institute Charles Steinhardt, is intrigued by these new results. "If we are actually dealing with two disagreements, it means that our current model would be "broken in an interesting way", he says. "In order to solve two problems, one regarding the composition of the Universe and one regarding the expansion rate of the Universe, rather different physical explanations are required than if we only want to explain a single discrepancy in the expansion rate".

The Scientific work continues at the Nordic Optical Telescope

With the Nordic Optical Telescope in Gran Canaria the researchers are now acquiring new redshifts from the host galaxies. When they compare these results with the supernova based redshifts, they will be able to see if the two techniques remain different. "We have learned that these sensitive measurements require precise measurements of velocity, and these will be attainable with fresh observations", Steinhardt explains.