An international group of astronomers, led by Juan Diego Soler of the Max Planck Institute for Astronomy, have found a complex network of filamentary structures of atomic hydrogen gas that pervades the Milky Way. They made this intricate web of gas visible by applying techniques from machine vision to THOR survey data that provides the most detailed view on the distribution of atomic hydrogen in the inner Milky Way to date. The scientists analysed the filaments’ orientations relative to the Milky Way disk using statistical methods and simulations. They inferred that the structure conserved an imprint of historic dynamical processes induced by the rotation of the galactic disk and feedback from ancient supernova explosions.

Atomic hydrogen emission from an excerpt from the THOR survey (top) and associated filamentary structures around the Magdalena filament (bottom). Colours represent the emission at three radial velocities.

Hydrogen is the key ingredient to form new stars. Yet, although it is the most abundant chemical element in the Universe, the question of how this gas assembles into clouds from which stars ultimately form, is still an open one. A collaboration of astronomers headed by Juan Diego Soler from the Max Planck Institute of Astronomy (MPIA) in Heidelberg has now taken an important step to answering it.

Soler processed data of the MPIA-led THOR (The HI/OH/recombination line) survey, which contains observations obtained with the Karl G. Jansky Very Large Array (VLA) radio interferometer based in New Mexico, USA. The survey provides maps of gas distributed across the inner region of the Milky Way that have the highest spatial resolution to date. “The latest addition to the THOR data set is our data release 2 that includes a census of the neutral atomic hydrogen at an angular resolution of 40 arcseconds,” Henrik Beuther explains, who leads the THOR project at MPIA.

“We used the famous spectral line of hydrogen located at a wavelength of 21 cm,” Yuan Wang explains, who was responsible for processing the data. “These data also provide the gas velocity in the direction of observation. Combined with a model of how the gas in the Milky Way disk rotates around its centre, we even can infer distances”, Wang adds about one of the crucial methods that astronomers use for determining the general structure of the Milky Way. However, the unprecedented resolution of the THOR observations enabled completely new studies.

To better register the atomic hydrogen gas distribution, Soler applied a mathematical algorithm to the data commonly used in applications such as character recognition and satellite image analysis. This resulted in revealing an extensive and intricate network of hydrogen filaments. The team of astronomers found most of them be parallel to the disk of the Milky Way, including a 3000 light-years-long hydrogen lane, which Soler named Magdalena to honour the longest river in Colombia, his country of birth. “Maggie [Magdalena] could be the largest known coherent object in the Milky Way. In recent years, astronomers have studied many molecular filaments, but Maggie seems to be purely atomic. Because of its fortunate position in the Milky Way, we are lucky to have been able to spot it,” remarks Jonas Syed, a PhD student at MPIA, who is also part of the THOR team. However, it was a population of vertical filaments that particularly attracted the attention of the researchers. 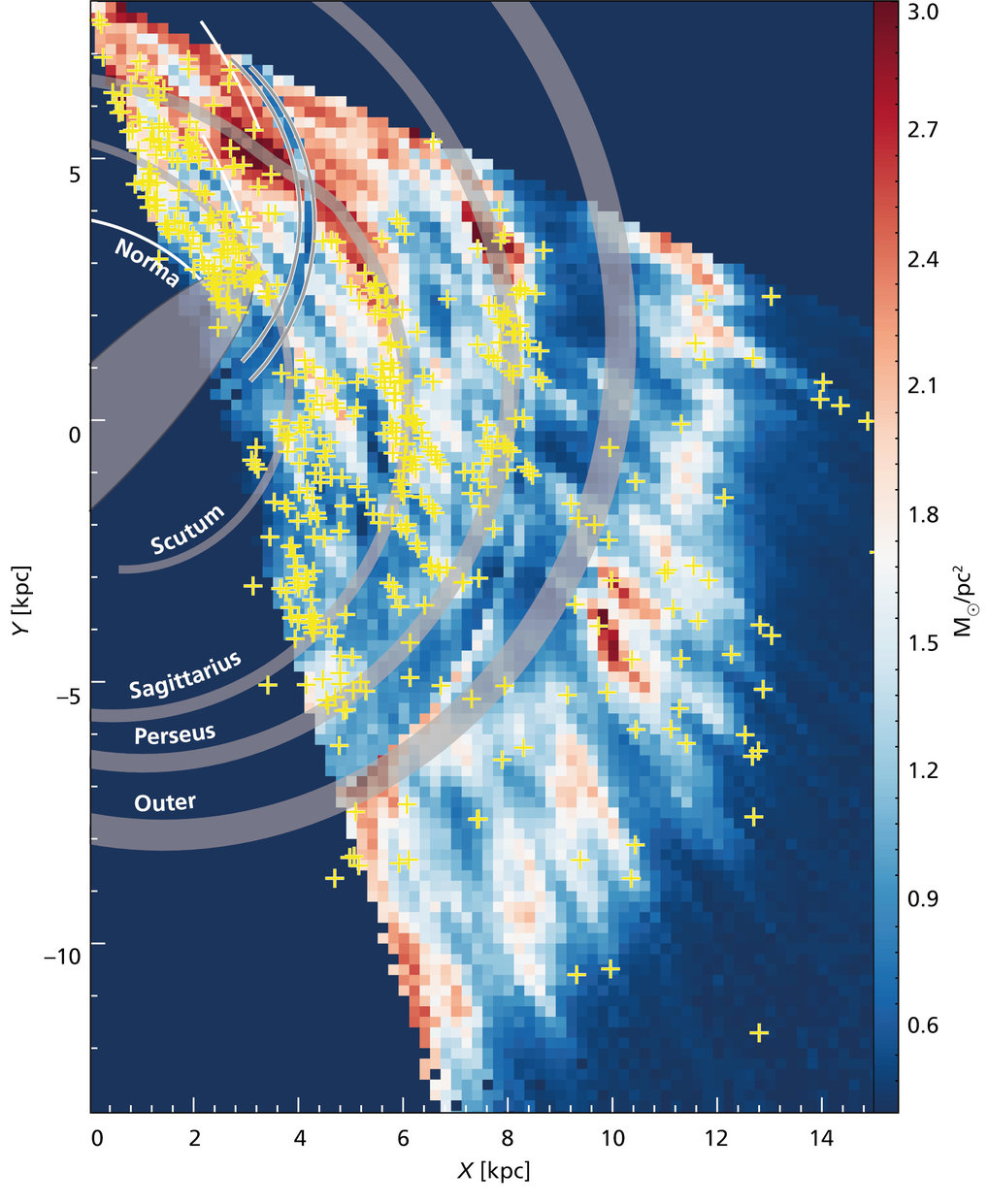 Reconstruction of the hydrogen gas distribution in a portion of the Milky Way based on the THOR survey observations ...
Image: Wang et al. 2020

“Like in the spinning pizza dough, we expected that most of the filaments would be parallel to the plane and stretched by the rotation. But when we found many vertical filaments around regions known for their high star formation activity, we knew we were onto something. Some process must have been blowing material off the Galactic plane,” Soler explains. Stars with high masses (more than eight times the Sun’s mass) inject large quantities of energy into their surroundings through winds, ionizing radiation, and at the end of their lives through supernova explosions.

In the past, astronomers have used the atomic hydrogen observations to identify the shells around supernova explosions that are up to a few million years old. The shock waves from these explosions cause the diffuse and ubiquitous hydrogen gas to pile up in denser clouds, which scientists suspect to be the first steps in the process of star formation. But this is different. Since most of the vertical filaments of atomic hydrogen appear concentrated in regions with a long history of star formation, where several generations of stars and supernova explosions have shaped the environment, the researchers linked them to events that preceded the known shells.

“Most likely, we are looking at the remnant of many older shells that popped when they reached the edge of the Galactic disk, accumulated over millions of years, and remain coherent thanks to the magnetic fields,” Soler explains. The team inferred this conclusion from using advanced numerical simulations of the dynamics of supernova explosions, magnetic fields, and galactic motions provided by a research group led by Rowan Smith at the Jodrell Bank Centre for Astrophysics in the UK and Patrick Hennebelle at the CEA/Saclay in France.

The results and analysis tools from this study offer a new link between the observations and the physical processes that lead to the accumulation of gas that precedes the formation of new stars in the Milky Way and other galaxies. “Galaxies are complex dynamical systems, and new clues are hard to obtain. Archaeologists reconstitute civilizations from the ruins of cities. Palaeontologists piece together ancient ecosystems from dinosaur bones. We are reconstructing the Milky Way history using the clouds of atomic hydrogen gas,” Soler concludes.