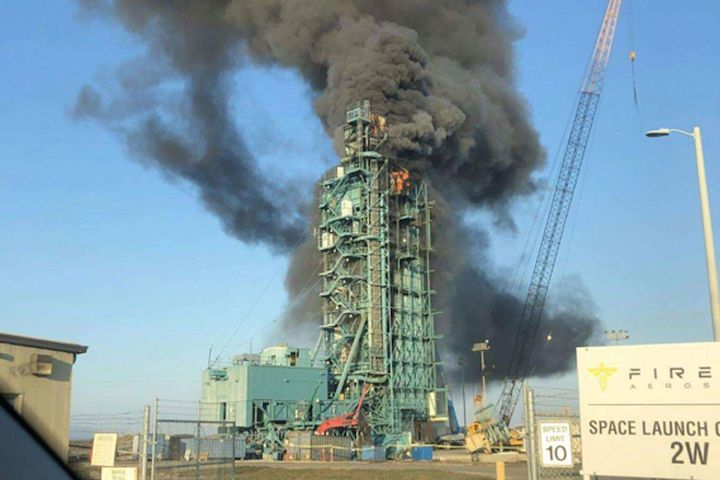 Smoke pours from a fire at a rocket launch tower being decommissioned at Vandenberg Air Force Base on Thursday. (Facebook photo)

A fire burned part of the distinctive rocket tower at Vandenberg Air Force Base on Thursday as crews worked to dismantle the facility.

The launch site, most recently used for liftoffs of United Launch Alliance's Delta II rockets, has been handed over to Texas-based Firefly Aerospace, which is developing a new family of rockets as an economical way to carry small- to medium-sized satellites into space.

The firm has a long-term lease to use the site with hopes of saving money by using some of the existing facilities.

On Friday morning, Firefly Aerospace spokeman Eric Salwan said the blaze was not associated with the firm's operations.

"While Firefly is preparing for launch of its Alpha vehicle from the site later this year, an unaffiliated project is involved in the removal of excess heritage infrastructure from the facility. A contractor engaged in cutting and removing material from the mobile service tower accidentally initiated a fire which was quickly extinguished," Salwan said. "This incident did not impact Firefly personnel, equipment or schedule for first flight.”

Another Firefly representative said the incident did not damage new infrastructure installed at the site for the Firefly rockets.

On Friday morning, Vandenberg public affairs officials confirmed that members of the Vandenberg Fire Department responded to the incident at approximately 10 a.m. Thursday.

Firefighters had to make their way up on 13 levels of the tower to ensure the blaze had been estinguished.

The fire was caused by ongoing demolition efforts when a piece of hot metal made contact with flammable materials within the complex, Vandenberg officials confirmed.

It is the second fire of the year directly or indirectly connected to Firefly Aerospace.

In January at the firm’s Texas facility, Firefly experienced a small blaze while conducting a test of its Alpha rocket’s first stage, according to a story on SpaceflightNow.com.

Known for its NASA blue color, the site referred to as Slick-2 has been home to dozens of Delta rocket launches of scientific, commercial and military satellites through the years. Its final mission involved carrying NASA's IceSat-2 to orbit in September 2018.