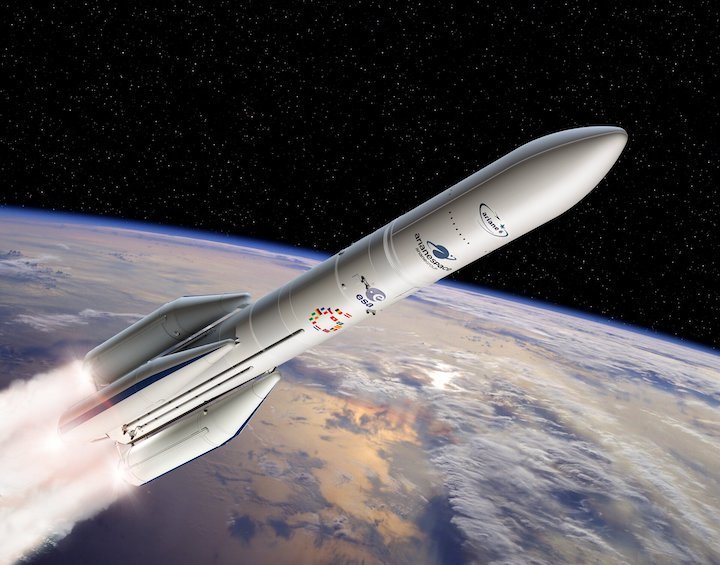 All three engines developed to power Europe’s future Ariane 6 rocket have completed extensive tests – the P120C solid rocket motor for the boosters, the Vulcain 2.1 engine for the core stage and the Vinci for the upper stage.

Ariane 6 in the four-booster version will stand 63m tall, will weigh 900 tonnes and have the liftoff power equivalent to 12 Airbus A380 engines roaring at takeoff.

Two or four P120Cs, depending on the configuration, will be strapped onto Ariane 6’s core stage as boosters for liftoff.

The P120C is Europe’s new solid propulsion workhorse. The ‘C’ stands for ‘common’ as P120C will be used on both ESA-developed launcher systems – Vega-C as well as Ariane 6. It has been developed by Europropulsion, which is owned jointly by Avio and ArianeGroup.

Rocket motors that contain solid fuel burn until the fuel is depleted. Simple and powerful, this form of propulsion is often an operations low-cost option for raw power, used most often at the liftoff stage. Each P120C motor provides about 4500 kN of thrust.

P120C is 13.5 m long and 3.4 m in diameter and weighs 11 tonnes. Its 25 cm thick casing is made using a carbon composite material and it is built in one segment at Avio’s Colleferro rocket factory in Italy. ArianeGroup in France developed the advanced P120C nozzle, while Nammo in Norway provided the igniter. Efficient production methods have shortened production cycles and optimised costs.

Three models of the P120C have completed hot firings at Europe’s Spaceport in French Guiana: the development model (DM1) in July 2018, the first qualification model (QM1) in January 2019 – the version which will be used on Vega-C’s maiden flight, and most recently the qualification model (QM2) in October 2020 for use on the maiden flight of Ariane 6. The production of the motor components for the Vega-C flight model is almost complete.

The final step is to demonstrate that new production facilities are fully up and running to meet demand.

Ariane 6’s core stage cryogenic engine, the Vulcain 2.1, is fueled by liquid oxygen–hydrogen. It delivers 1371 kN of thrust in vacuum to propel Ariane 6 in the first eight minutes of flight, up to an altitude of 200 km. It weighs the same as an Airbus A318 jet engine but provides more than 10 times the power.

The Vulcain 2.1 features a 3D-printed gas generator, a redesigned, simplified nozzle and a combustion chamber that can be ignited from the ground via the bottom of the nozzle instead of by pyrotechnic devices inside the motor, reducing the cost and weight.

Expensive liquid helium is no longer needed as it was for Vulcain 2.0 because heated oxygen in the exhaust lines now pressurises the oxygen tank.

The final qualification static firing test of Vulcain 2.1 in July 2019 in Lampoldshausen confirmed the functional and mechanical behaviour of this engine while upcoming combined tests will qualify Ariane 6 subsystems at stage and launcher level.

Vinci is Europe’s first expander cycle engine and will power Ariane 6’s upper stage. It is fueled by liquid oxygen–hydrogen and can be reignited up to five times. This increases the operational flexibility of Ariane 6 and ensures that the engine safely deorbits at the end of the mission.

The qualifying tests for the Vinci were completed in October 2018. This engine was successfully tested more than 140 times and reignited multiple times in succession in near vacuum to complete its qualification bringing a total of more than 14 hours of operation.

The Vinci engine will be integrated with the complete Ariane 6 upper stage at ArianeGroup facilities in Bremen, Germany. It will then be transported to the DLR German Aerospace Center in Lampoldshausen where the Ariane 6 upper stage will experience a simulated launch inside their new P5.2 facility.

The Ariane 6 engines are now ready