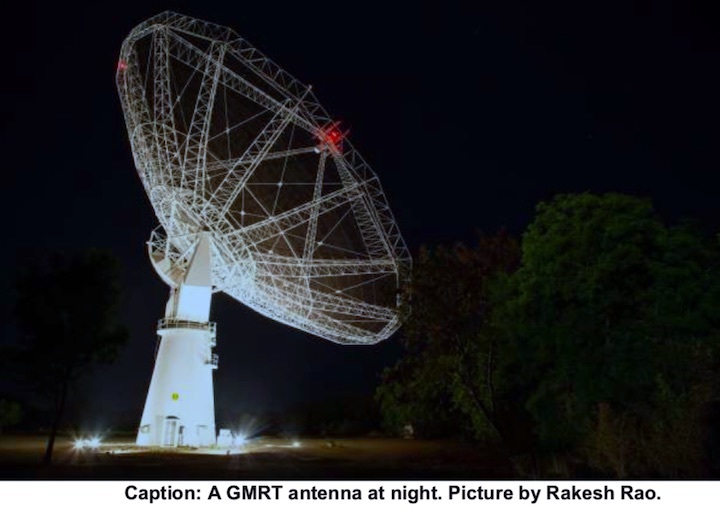 A team of astronomers from the National Centre for Radio Astrophysics (NCRA-TIFR) in Pune, and the Raman Research Institute (RRI), in Bangalore, has used the upgraded Giant Metrewave Radio Telescope (GMRT) to measure the atomic hydrogen content of galaxies seen as they were 8 billion years ago, when the universe was young. This is the earliest epoch in the universe for which there is a measurement of the atomic gas content of galaxies. This research has been published in the 15 October 2020 issue of the journal Nature.

Galaxies in the universe are made up mostly of gas and stars, with gas being converted into stars during the life of a galaxy. Understanding galaxies thus requires us to determine how the amounts of both gas and stars change with time. Astronomers have long known that galaxies formed stars at a higher rate when the universe was young than they do today. The star formation activity in galaxies peaked about 8-10 billion years ago and has been declining steadily till today. The cause of this decline is unknown, mostly because we have had no information about the amount of atomic hydrogen gas, the primary fuel for star formation, in galaxies in these early times.

The measurement of the atomic hydrogen mass of distant galaxies was done by using the upgraded GMRT to search for a spectral line in atomic hydrogen. Unlike stars which emit light strongly at optical wavelengths, the atomic hydrogen signal lies in the radio wavelengths, at a wavelength of 21 cm, and can only be detected with radio telescopes. Unfortunately, this 21 cm signal is very weak, and difficult to detect from distant individual galaxies even with powerful telescopes like the upgraded GMRT. To overcome this limitation, the team used a technique called “stacking” to combine the 21 cm signals of nearly 8,000 galaxies that had earlier been identified with optical telescopes. This method measures the average gas content of these galaxies.

before the GMRT upgrade meant that we could cover only around 850 galaxies in our analysis, and hence were not sensitive enough to detect the signal.”. 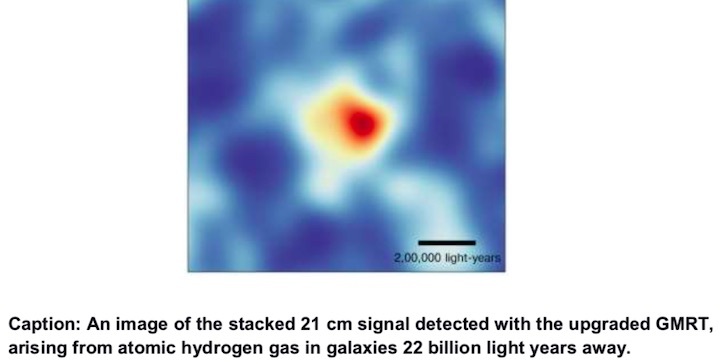 “The big jump in our sensitivity is due to the upgrade of the GMRT in 2017”, said Jayaram Chengalur, of NCRA-TIFR, a co-author of the paper. “The new wide band receivers and electronics allowed us to use 10 times more galaxies in the stacking analysis, giving sufficient sensitivity to detect the weak average 21 cm signal.”

Detecting the 21 cm signal from the most distant galaxies in the universe was the main science goal of the GMRT, when it was designed and built by a team led by Govind Swarup in the 1980’s and 1990’s. However, shortly before the GMRT was completed, it became clear that the 21 cm signals from early galaxies would be much weaker than originally predicted, making it very difficult to detect the signal. However, studying the distant universe through the 21 cm signal has remained an important research area in astronomy, and at the GMRT. “Govind Swarup was very interested in this work, and was following it keenly. Sadly, he passed away shortly before it was published. This work would not have been possible without him and the wonderful team that he put together to first build and then upgrade the GMRT.”, said Nissim Kanekar of NCRA-TIFR, a co-author of the study.

The results have been published in the October 15 issue of Nature (https://www.nature.com/articles/s41586-020-2794-7). The research was carried out by Aditya Chowdhury, Nissim Kanekar, and Jayaram Chengalur of NCRA-TIFR, and Shiv Sethi, and K. S. Dwarakanath of RRI. The Giant Metrewave Radio Telescope was built and is operated by NCRA-TIFR. The research was funded by the Department of Atomic Energy, India, and the Department of Science and Technology, India.