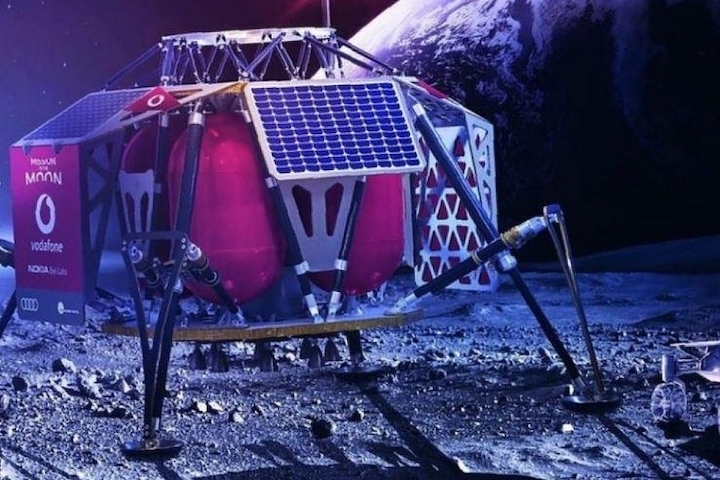 This is an artist's conception of a lunar lander operated by Vodafone and Nokia that would bring 4G cellular communications and robotic rovers to the moon. Image courtesy of Vodafone

ORLANDO, Fla., NASA will fund a project by Nokia to build a 4G cellular communication network on the moon with $14.1 million, the space agency announced.

That project was part of $370 million in new contracts for lunar surface research missions NASA announced Wednesday. Most of the money went to large space companies like SpaceX and United Launch Alliance to perfect techniques to make and handle rocket propellant in space.

The space agency must quickly develop new technologies for living and working on the moon if it wants to realize its goal to have astronauts working at a lunar base by 2028, NASA Administrator Jim Bridenstine said in a live broadcast.

"We need power systems that can last a long time on the surface of the moon, and we need habitation capability on the surface," Bridenstine said.

Nokia and British firm Vodafone had announced their goal for a moon mission in 2018. They had planned to launch a lander and rovers built by Audi, utilizing a SpaceX rocket.

At the time, the companies said they would set down near the Apollo 17 landing site and have rovers examine the Lunar Roving Vehicle, or moon buggy, astronauts left behind in 1972. That launch never happened, but the new contract breathes life into Nokia's plans for moon projects.

"The system would also extend to spacecraft," Reuter said. "With NASA funding, Nokia will look at how terrestrial technology could be modified for the lunar environment to support reliable, high-rate communications."

Nokia didn't respond to questions about the intended landing site for the company's first mission. NASA hasn't decided on a landing site for the agency's Artemis missions, but Bridenstine reiterated Wednesday that the target is a site near water-ice deposits on the lunar South Pole.

The contracts are geared toward NASA's Tipping Point program, which funds technologies that, if demonstrated successfully, are likely to be adopted by private industry.

"We want to build the [lunar] infrastructure...that is going to enable an international partnership for the biggest, broadest, most diverse inclusive coalition of researchers and explorers in the history of humankind," Bridenstine said.

Houston-based Intuitive Machines, for example, will develop a "hopping robot" that could launch and carry small payloads from one lunar site to another.

And Alpha Space, also based in Houston, will create a small laboratory that could land on the moon's surface and allow researchers to study how the extreme temperatures and radiation affect materials and electronics.