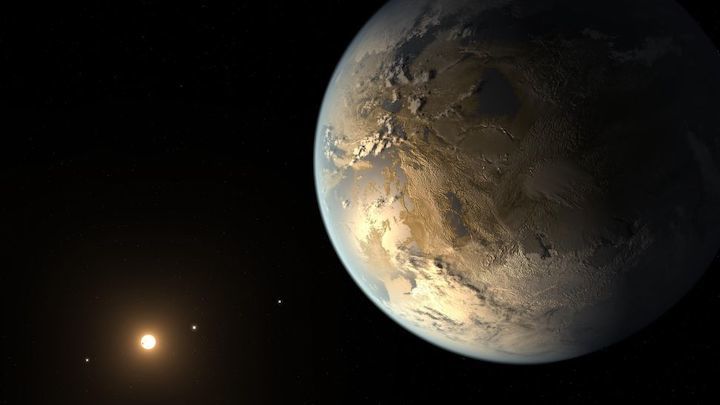 On Earth, there is life virtually everywhere there is liquid water. As such, the hunt for extraterrestrial life has focused on so-called habitable or "Goldilocks" zones— areas around stars temperate enough for planets to possess liquid water on their surfaces.

Since Earth is the only inhabited world known, this planet is usually the focus of studies on habitability. However, scientists have reasoned that worlds other than Earth-like ones could offer conditions suitable for life to emerge and evolve. Such worlds might even prove "super-habitable," or have better chances at hosting life than Earth.

"We are so over-focused on finding a mirror image of Earth that we may overlook a planet that is even more well-suited for life," study lead author Dirk Schulze-Makuch, an astrobiologist at Washington State University in Pullman and the Technical University of Berlin, told Space.com.

In addition to looking at planetary systems with yellow dwarf stars like our sun, the scientists also looked at orange dwarf stars, which are somewhat cooler, dimmer and less massive than our sun. Whereas our sun has a lifetime estimated at less than 10 billion years, orange dwarfs have lifetimes of 20 billion to 70 billion years. Since complex life took about 3.5 billion years to appear on Earth, the longer lifetimes of orange dwarfs could give planets within their habitable zones more time to develop life and accrue biodiversity. Orange dwarfs are also about 50% more frequent than yellow dwarfs in the Milky Way.

"Our sun is actually not the best kind of star for hosting a planet with lots of life on it," Schulze-Makuch said.

The size and mass of a planet can also influence how well it can support life. A planet that is 10% wider than Earth would have more habitable land. One that is about 1.5 times Earth's mass would be expected to retain its interior heat longer, which in turn would help keep its core molten and its protective magnetic fields active. A heavier planet would also have stronger gravity to help retain its atmosphere over a longer span of time.

Worlds that are slightly warmer than Earth by about 8 degrees Fahrenheit (5 degrees Celsius) might be super-habitable, since they could have larger tropical zones that could be more benign for more biodiversity. However, warmer planets might also need more moisture, since greater heat could expand deserts.

In addition, planets with the same amount of land area as Earth but broken up into smaller continents might be more habitable. When it comes to continents that are too large (such as Earth's past continent Gondwana about 500 million years ago), their centers are far from oceans, often rendering the interiors of large continents vast, inhospitable deserts. Moreover, Earth’s shallow waters have a greater biodiversity than its deep oceans, so planets with shallower waters may be super-habitable.

All in all, the scientists identified 24 potentially super-habitable planets. None of them met all the criteria the researchers drew up for super-habitable planets, but one did meet at least two — KOI 5715.01, a planet about 5.5 billion years old and 1.8 to 2.4 times Earth's diameter orbiting an orange dwarf about 2,965 light-years away. It might have an average surface temperature about 4.3 degrees F (2.4 degrees C) cooler than Earth, but if it has more greenhouse gases than Earth to trap heat, it might be super-habitable, they said.

Schulze-Makuch's favorite potentially super-habitable world from these 24 was KOI 5554.01, a world about 6.5 billion years old 0.72 to 1.29 times Earth's diameter orbiting a yellow dwarf about 700 light-years from Earth.

"I really liked the average surface temperature — about 27 degrees C [80 degrees F]," Schulze-Makuch said. "And it's probably about Earth's size, and a little bit older than Earth."

All 24 of these potentially super-habitable planets are more than 100 light-years from Earth. This makes them too far for NASA's Transiting Exoplanet Survey Satellite (TESS) spacecraft to capture high-quality images from to learn more about them.

The scientists detailed their findings online Sept. 18 in the journal Astrobiology.