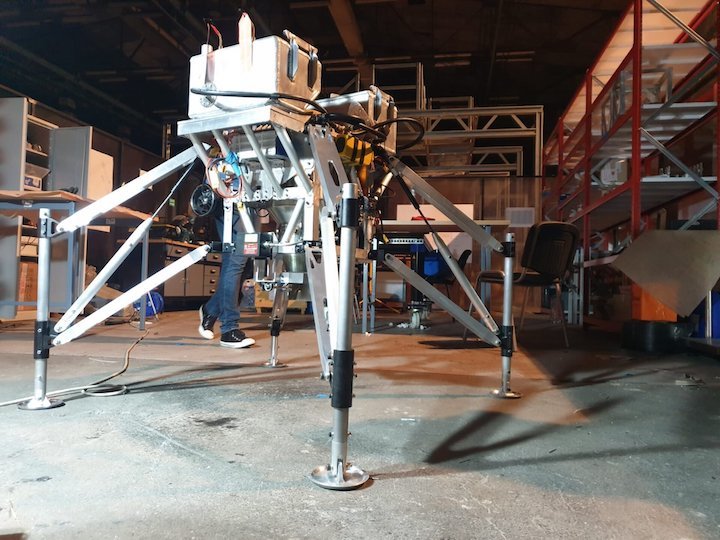 The demonstrator technology vehicle (DTV) is a 60 kg platform with landing legs. It has been developed by INCAS, Romania’s National Institute for Aerospace Research in Bucharest.

DTV's turbo jet 0.9 kN-class engine provides the power to carry payloads totalling 20 kg. Tests at INCAS in July 2020 lasted ten seconds to a couple of minutes to demonstrate vertical takeoff, short hovering and landing manoeuvres – the technology building blocks for the recovery of a rocket stage.

This project was carried out with the support of ESA’s Future Launchers Preparatory Programme.

This 60 kg platform has landing legs and is powered by a turbo jet 0.9 kN-class engine. It is capable of carrying payloads totalling 5 kg.

The demonstrator technology vehicle (DTV) was tested this summer at INCAS in Bucharest. Tethers were used as a safety measure and to protect it from damage in case of an equipment failure during flight. Manoeuvres lasted ten seconds to a couple of minutes.

“The major challenges are the design and test of the guidance, navigation and control techniques. They should allow robust and autonomous control of the platform during the three flight sequences: takeoff, hovering and landing,” explained Stephane Dussy, ESA’s Demonstrator lead project engineer.

This project has been carried out within ESA’s Future Launchers Preparatory Programme (FLPP). FLPP hones technologies for future space transportation solutions with the objective to improve the mid- to long-term competitiveness of European launch services.

The DTV is a fast track and low-cost entry step into some of the important fields being investigated and is providing precious technical results. Once qualified, it will be used as a platform for in-flight demonstrations, in particular for launcher reusability and planetary space transportation.

“These tests represent a major milestone, proving several technology building blocks for the recovery of a large scale in-flight demonstration rocket booster for the purpose of reusability,” added Mr. Dussy.

ESA gave support on the vehicle design and guidance, navigation and control (GNC) and made recommendations to ensure safe testing.

A more powerful DTV weighing 130 kg with three engines is also being considered and would be capable of supporting larger payloads.