SpaceX and its CEO Elon Musk have their sights set on taking humans to Mars in the near future, and much of that involves fairly traditional engineering challenges like rocket fuels, engines, and payload capacities. However, the creativity and fun that’s been fused into the mission by the commercial space company definitely makes it stand out against industry peers. In that same spirit, Musk now looks to be entertaining an official ‘Flag of Mars’ design, and one of the first contenders features SpaceX’s flagship rocket, the Falcon 9.

Spaceflight photographer John Kraus recently shared a blog post on his Patreon account providing insight on the ups and downs of his profession. “I wrote an extensive piece for my @Patreon supporters about capturing Falcon 9 transiting the sun on Tuesday: How I did it, some (very) candid thoughts on the photo’s overwhelming reception, and why scrubs are a not-fun but worthwhile part of the process,” Kraus wrote on Twitter alongside the referenced photo.

In the post, Kraus was specifically highlighting SpaceX’s recent Starlink launch that was scrubbed several times before successfully taking flight. The popularity of the photo that resulted combined with Musk’s familiarity with his rocket company’s regular photographers seemed to both garner the CEO’s attention and inspire a suggestion for the image’s future. “Maybe this should be the flag of Mars,” Musk tweeted. 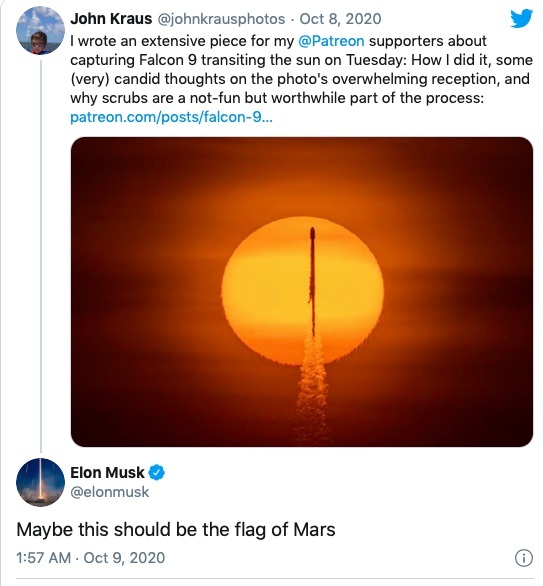 SpaceX has made significant progress in recent days with Starship, the company’s rocket that will ferry passengers to Mars. In early August this year, a full-scale prototype of the rocket successfully launched about 500 feet into the air and landed in a similar manner as its sibling, the Falcon 9. Much higher and more daring attempts, a 12-mile-high hop, for instance, are next on the schedule. Notably, a version of Starship aimed for use on the Moon is also in the works.

Musk has previously detailed his plans to build a city on the red planet by 2050 and fill it with one million people. To accomplish that goal, at least 1,000 Starships would need to be built, each ferrying 100 people and launching at least three daily. “Megatons per year to orbit are needed for life to become multi-planetary,” Musk previously explained. The long journey has also meant that entertainment plans were a must, including fine dining, something the CEO mentioned when he first introduced his long-term Mars vision.

SpaceX has also joined in creative projects aimed at closer locations in space, namely the Moon. In a project called “Dear Moon,” the spaceflight company has partnered with eccentric Japanese billionaire Yusaku Maezawa for a privately chartered trip around our lunar neighbor in 2023. Artists have been invited to apply for the chance to join the journey as a source of new inspiration for their work. Returning to the flag idea, perhaps engaging the public will be a part of creating an actual ‘Flag of Mars’ as well. While one idea may already be in the running, there would certainly be many more willing participants if given the opportunity.