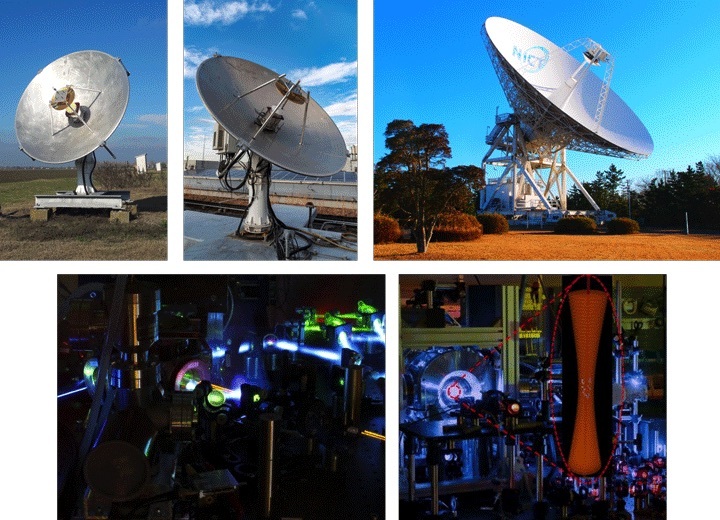 Antennas and optical lattice clocks used in the measurements

Upper left: Transportable 2.4 m antenna installed at the INAF radio observatory in Medicina, Italy.
Upper middle: Transportable 2.4 m antenna installed at NICT in Koganei, Japan.
Upper right: 34 m antenna located at NICT in Kashima, Japan.
Bottom left: The ytterbium optical lattice clock IT-Yb1, operated at INRIM in Torino, Italy.
Bottom right: The strontium optical lattice clock NICT-Sr1, located at NICT in Koganei, Japan.
-
Using radio telescopes observing distant stars, scientists have connected optical atomic clocks on different continents. The results were published in the scientific journal Nature Physics (DOI: 10.1038/s41567-020-01038-6) by an international collaboration between 33 astronomers and clock experts at the National Institute of Information and Communications Technology (NICT, Japan), the Istituto Nazionale di Ricerca Metrologica (INRIM, Italy), the Istituto Nazionale di Astrofisica (INAF, Italy), and the Bureau International des Poids et Mesures (BIPM, France).
The BIPM in Sèvres near Paris routinely calculates the international time recommended for civil use (UTC, Coordinated Universal Time) from the comparison of atomic clocks via satellite communications. However, the satellite connections that are essential to maintaining a synchronized global time have not kept up with the development of new atomic clocks: optical clocks that use lasers interacting with ultracold atoms to give a very refined ticking. “To take the full benefit of optical clocks in UTC, it is important to improve worldwide clock comparison methods.” said Gérard Petit, physicist at the Time Department at BIPM.
In this new research, highly-energetic extragalactic radio sources replace satellites as the source of reference signals. The group of SEKIDO Mamoru at NICT designed two special radio telescopes, one deployed in Japan and the other in Italy, to realize the connection using the technique of Very Long Baseline Interferometry (VLBI). These telescopes are capable of observations over a large bandwidth, while antenna dishes of just 2.4 meter diameter keep them transportable. “We want to show that broadband VLBI has potential to be a powerful tool not only for geodesy and astronomy, but also for metrology.” commented SEKIDO. To reach the required sensitivity, the small antennas worked in tandem with a larger 34 m radio telescope in Kashima, Japan during the measurements taken from October 14 2018 to February 14 2019. For the Kashima radio telescope, these were among the last observations before the telescope was irreparably damaged by typhoon Faxai in September 2019.
The goal of the collaboration was to connect two optical clocks in Italy and Japan, separated by a baseline distance of 8700 km.  These clocks load hundreds of ultra-cold atoms in an optical lattice, an atomic trap engineered with laser light. The clocks use different atomic species: ytterbium for the clock at INRIM and strontium at NICT. Both are candidates for a future redefinition of the second in the International System of Units (SI). “Today, the new generation of optical clocks is pushing to review the definition of the second. The road to a redefinition must face the challenge of comparing clocks globally, at the intercontinental scale, with better performances than today,” said Davide Calonico, head of the "Quantum Metrology and Nanotechnology" division and coordinator of the research at INRIM.
The connection is possible by observing quasars billions of light-years away: radio sources powered by black holes weighing millions of solar masses, but so distant that they can be considered fixed points in the sky. The telescopes aim at a different star every few minutes to compensate for the effects of the atmosphere. “We observed the signal not from satellites, but from cosmic radio sources,” commented IDO Tetsuya, director of the "Space-Time Standards Laboratory" and coordinator of the research at NICT. “VLBI may allow us in Asia  to access the UTC relying on what we can prepare by ourselves.” IDO added.
Antennas like the transportable ones used in these measurements can be installed directly at the laboratories developing optical clocks around the world. According to SEKIDO, “a global optical clock network connected by VLBI may be realized by collaboration between the international communities of metrology and geodesy, just like the broadband VLBI network of the VLBI Global Observing System (VGOS) has already been established,” while Petit commented: “waiting for long-distance optical links, this research shows that there is still to gain from radio links, where VLBI with transportable antennas can complement the Global Navigation Satellite Systems and telecommunication satellites.”
Besides improving international timekeeping, such an infrastructure also opens new ways to study fundamental physics and general relativity, to explore variations of Earth’s gravitational field, or even the variation of fundamental constants underlying physics. Federico Perini, coordinator of the research at INAF, commented “We are proud to have been part of this collaboration helping to achieve such a big step forward in developing a technique which, using the most distant radio sources in the Universe, makes possible the measurement of the frequencies generated by two of the most accurate clocks here on the Earth.” Calonico concludes  “Our comparison using VLBI gives a new perspective to improve and investigate new methods for clock comparisons, also looking at the contamination between different disciplines.”
Quelle: NICT  National Institute of Information and Communications Technology
Astronomie - Signals from Distant Stars Connect Optical Atomic Clocks across Earth for the First Time
« Zum vorherigen Eintrag Zum nächsten Eintrag »
327 Views
Created with page4