This case was part of the list and I wanted to summarize what we know about the case from the Blue Book Case file and the Fitzgerald report issued by a civilian saucer group that investigated the case.

At 0300 AM EDT on September 21, 1958, the witness had just finished watching a late night movie (Dracula’s daughter) and had gone to bed. A bright light then illuminated the bedroom. The witness tried to wake her husband but he was too sound a sleeper. She looked out the bedroom window and saw a large disc-shaped object (approximately 20X6 feet) illuminating the front lawn. It shot out gas or steam from some vents and slowly floated in a northerly direction across the yard. It then rose and disappeared. The sequence of events lasted about 5 minutes. The next day, her 10-year-old stepson revealed he had gotten up around the same time and saw the UFO out the window by stepping onto top of a heat register.

Blue Book sent two technical sergeants (TSGT/E-6s) from the local Air Force Base to investigate the event on October 3, 1958. According to Blue Book records, one of the Sergeants interviewed the witness for two and a half hours. They discovered that a train had passed south of the home around 0254 AM EDT and that it operated a high beam light, called a Mars light, that oscillated in a figure 8 pattern (one can see a video of a Mars light here and here). They also inquired for activities at the local coast guard station (over 3 miles to the west). Coast Guard Chief Schott reported that they had been operating a search light on a boat that may have directed the light in the direction of the Fitzgerald home. The weather that morning was misty with haze and smoke.

This report was written on December 1, 1958 by UFO research committee of Akron, Ohio. In that report the witness stated the visual part of the sighting lasted 36 seconds. We also learned that the stepson reported the sighting to his father before his mother awoke and revealed she had seen the UFO. The report also stated that she compared the UFO to the object in case 8 of the Blue Book’s Special Report #14. Additionally, the report mentioned other supporting witnesses. Some were three miles away in Lorain and the times/directions did not really match. I did not see any locations for the other two witnesses but I assume they were in Sheffield lake area and much closer to the location of the sighting. However, their sightings were very vague on details and they only reported seeing illumination of their windows or hearing noises. Nobody reported actually seeing the craft except the primary witness and her stepson.

As expected, the report criticized the AF investigators. They claimed the TSGT only asked six questions of the witness. The Fitzgerald report also stated that the train’s lights never strike the house.

Blue Book was forced to respond to the report and some of the comments regarding the Fitzgerald report’s criticisms were:

There was no mention that the witness had just finished watching the movie, “Dracula’s Daughter” and that this might have affected her state of mind during the events that followed.

The TSGTs reported that the UFO committee was not present during half of the interview and that they asked many more questions than those listed.

The TSGTs reported they did not bother to do a house to house check because they felt they had enough information already. They apparently did try to check up with somebody’s house that was nearby but nobody was home.

It was no surprise that she compared her UFO to one of the Blue Book Special Report 14 UFOs when shown all the various images. Instead of sketching it independently, she was given a choice of sketches that best fit what she saw.

There seemed to be confusion about EST and EDT regarding the train schedules.

There were other comments regarding the Coast Guard search light and other minor details. I think it is important to note that the TSGTs were sent to gather information and report what they had found. It would be up to officers at Blue Book to ask for additional information or confirm their conclusions. In my opinion, the criticisms leveled at these enlisted men, who could not spend in inordinate amount of time investigating the case, was unjustified.

I don’t think this case is that good. The story about the 10-year-old stepson was never followed up by either the civilian UFO organization or Blue Book. The other supporting witnesses, in the immeidate vicinity of the Fitzgerald home, were not very convincing and their observations could be explained by the train that was in the area. In my opinion, I think the passing train’s light was the source of the windows being illuminated (see next page’s aerial image from 1962) and could have been the source of the noises. The misty evening could have scattered the light of the train as well to make it more likely to illuminate the windows. 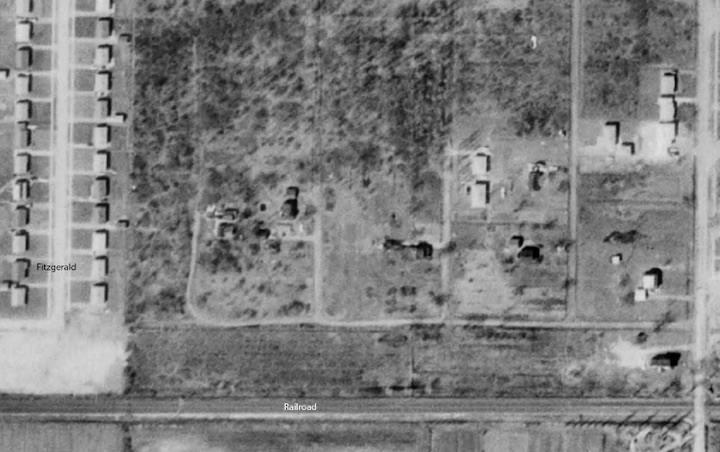 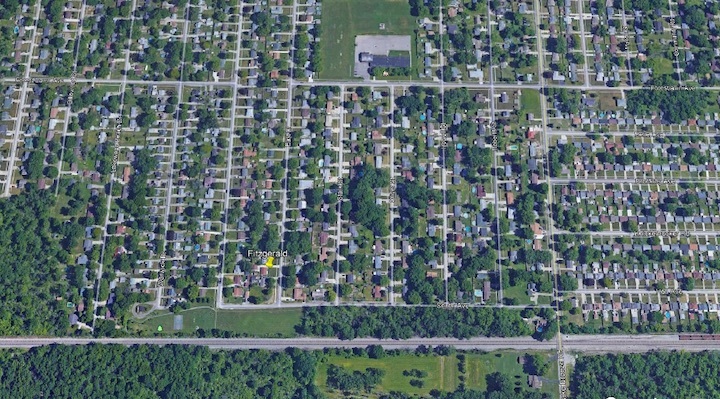 The Sheffield lake sighting area in 19624 (top) and today (bottom). It was less developed and the homes were newly built in 1958. They do not appear in 1952 aerial images. All the trees that would have blocked the trains light do not appear in the 1962 aerial. This could have been due to the image being taken in winter or early spring but the 1952 aerial appears to have been taken in summer and, while the ground appears to have plenty of grass, there are no bushy trees. The trees along the railroad tracks start to appear in the 1969-70 images. The lack of bushy trees would make it moe likely that the train’s light could have been visible from the house with the train some distance way. 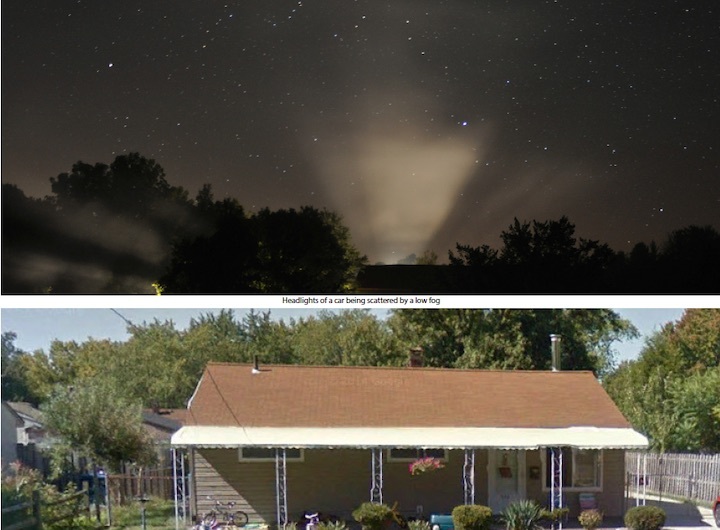 The second half of the sighting involved the witness’ description of a craft hovering in her yard as she peered through her window. Looking at the photographs of the front of the house on Google Earth and, based on what was written in the Fitzgerald report, it seems that the windows are still the same as they were in 1958. They are very small and require somebody being tall to look through them. The witnesses both stated they needed to stand up on top of something to see into the yard. One has to wonder if this did not play a role in their perceptions of what they saw. One could not tell without more information.

Based on the information that we do have from both sources, there are several possibilities:

I am not satisfied that any of these possibilities are satisfactory enough to explain the case. We just don’t know enough of how a passing train might appear from the house and if it might illuminate the lawn as well as the side of the house. As with many of these types of cases, any solution resides in the mind of those who reported what they saw. Since there is no solution that explains everything to my satisfaction, the case should be listed as unidentified.