Familiar stars shine, nebulae glow, and nearby galaxies tantalize in a new panorama of the northern sky assembled from 208 pictures captured by NASA’s Transiting Exoplanet Survey Satellite (TESS). The planet hunter imaged about 75% of the sky in a two-year-long survey and is still going strong.

TESS has discovered 74 exoplanets, or worlds beyond our solar system. Astronomers are sifting through some 1,200 additional exoplanet candidates, where potential new worlds await confirmation. More than 600 of these candidates lie in the northern sky.

TESS locates planets by simultaneously monitoring many stars over large regions of the sky and watching for tiny changes in their brightness. When a planet passes in front of its host star from our perspective, it blocks some of the star’s light, causing it to temporarily dim. This event is called a transit, and it repeats with every orbit of the planet around the star. This technique has proven to be the most successful planet-finding strategy so far, accounting for about three quarters of the nearly 4,300 exoplanets now known. The data collected also allow for the study of other phenomena such as stellar variations and supernova explosions in unprecedented detail.

The northern mosaic covers less of the sky than its southern counterpart, which was imaged during the mission’s first year of operations. For about half of the northern sectors, the team decided to angle the cameras further north to minimize the impact of scattered light from Earth and the Moon. This results in a prominent gap in coverage. 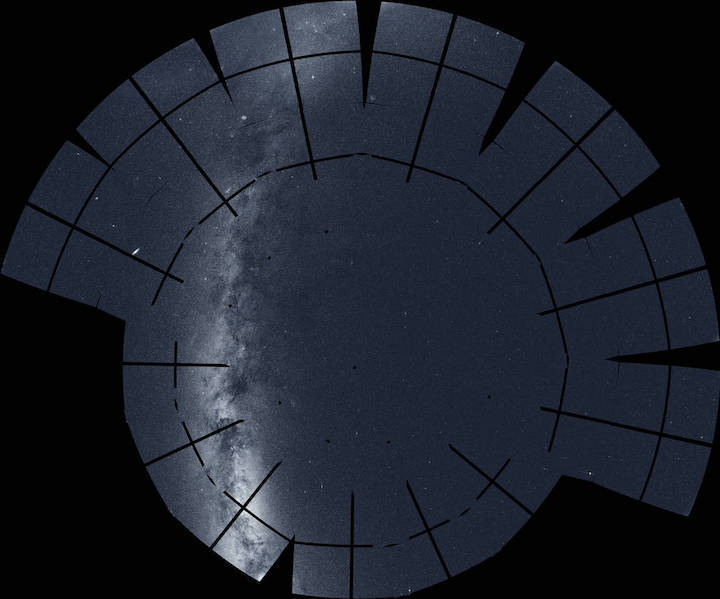 This mosaic of the northern sky incorporates 208 images taken by NASA’s Transiting Exoplanet Survey Satellite (TESS) during its second year of science operations, completed in July 2020. The mission split the northern sky into 13 sectors, each of which was imaged for nearly a month by the spacecraft’s four cameras. Among the many notable celestial objects visible: the glowing arc and obscuring dust clouds of the Milky Way (left), our home galaxy seen edgewise; the Andromeda galaxy (oval, center left), our nearest large galactic neighbor located 2.5 million light-years away; and the North America Nebula (lower left), part of a stellar factory complex 1,700 light-years away. The prominent dark lines are gaps between the detectors in TESS's camera system.
Credits: NASA/MIT/TESS and Ethan Kruse (USRA)

The northern panorama represents only a glimpse of the data TESS has returned. The mission splits each celestial hemisphere into 13 sectors. TESS imaged each sector for nearly a month using four cameras, which carry a total of 16 sensors called charge-coupled devices (CCDs). During its primary mission, the cameras captured a full sector of the sky every 30 minutes. This means each CCD acquired nearly 30,800 full science images. Adding in other measurements, TESS has beamed back more than 40 terabytes so far – equivalent to streaming some 12,000 high-definition movies.

Remarkably, these numbers will rise sharply over the next year. TESS has now begun its extended mission, during which it will spend another year imaging the southern sky. The satellite will revisit planets discovered in its first year, find new ones, and fill in coverage gaps from its initial survey. Improvements to the satellite’s data collection and processing now allow TESS to return full sector images every 10 minutes and measure the brightness of thousands of stars every 20 seconds – all while continuing its previous strategy of measuring the brightness of tens of thousands of stars every two minutes.

“These changes promise to make TESS’s extended mission even more fruitful,” said Padi Boyd, the mission’s project scientist at NASA’s Goddard Space Flight Center in Greenbelt, Maryland. “Making high-precision measurements of stellar brightness at these frequencies makes TESS an extraordinary new resource for studying flaring and pulsating stars and other transient phenomena, as well as for exploring the science of transiting exoplanets.”

TESS is a NASA Astrophysics Explorer mission led and operated by MIT in Cambridge, Massachusetts, and managed by NASA's Goddard Space Flight Center. Additional partners include Northrop Grumman, based in Falls Church, Virginia; NASA’s Ames Research Center in California’s Silicon Valley; the Harvard-Smithsonian Center for Astrophysics in Cambridge, Massachusetts; MIT’s Lincoln Laboratory; and the Space Telescope Science Institute in Baltimore. More than a dozen universities, research institutes, and observatories worldwide are participants in the mission.

Banner image: This detail of the TESS northern panorama features a region in the constellation Cygnus. At center, the sprawling dark nebula Le Gentil 3, a vast cloud of interstellar dust, obscures the light of more distant stars. A prominent tendril extending to the lower left points toward the bright North America Nebula, glowing gas so named for its resemblance to the continent. Credit: NASA/MIT/TESS and Ethan Kruse (USRA)