Feb. 2, 1966; Salisbury, North Carolina. 11:15 p.m. Witnesses: Mr. and Mrs. L.J. Wise. One silver, diamond-shaped object with several balls constantly in very fast motion around it, and much light. Object hovered over the trees for 3-4 minutes, while a dog barked, and then zipped out of sight. Sighting lasted 1 hour.1

The description by Sparks mirrors Berlinner’s.2

The description on the record card is not quite what Berlinner states. It describes an object that was bright and changed colors rapidly. The primary colors being red, green, and white. The object hovered in the position for 3-4 minutes but then moved NE where it hovered for an hour. It did not “zip out of sight”.

The record card is based on a letter by the witness to Dr. Hynek on March 24, 1966.3 The witness stated the sighting happened around 11:15 PM after they heard a dog barking. After describing the object, the witness stated it moved NE and then began to recede away. The witness added that when her husband came home, around 11:50 PM, they observed the object move in an arc towards the east and observed the object with binoculars until about 1AM. There is no indication that the object disappeared. I can only suspect they simply went to bed with the object still visible.

I find it somewhat amazing that Hynek did not consider the possibility that this might have an astronomical explanation. It is possible that he may have been “snake bit” by the “swamp gas” incident because the witness, in the letter, felt it important to emphasize that there were “no swamps” in her area.

The description of the object being diamond-shaped and having balls revolving around it can be explained by scintillation effects. It is not unusual to read reports of witnesses misperceiving stars in various ways.

As Hynek had learned in his investigation of the Michigan case, even Police officers can misinterpret Arcturus as a UFO .

The entire region was gripped with near-hysteria. One night at midnight I found myself in a police car racing toward a reported sighting. We had radio contact with other squad cars in the area. “I see it” from one car, “there it is” from another, “it’s east of the river near Dexter” from a third. Occasionally even I thought I glimpsed “it.”

Finally several squad cars met at an intersection. Men spilled out and pointed excitedly at the sky. “See--there it is! It’s moving!”

But it wasn’t moving. “It” was the star Arcturus, undeniably identified by its position in relation to the handle of the Big Dipper. A sobering demonstration for me.4

If police officers can easily be fooled by Arcturus, one can assume that the witnesses in this case could have been mistaken as well. 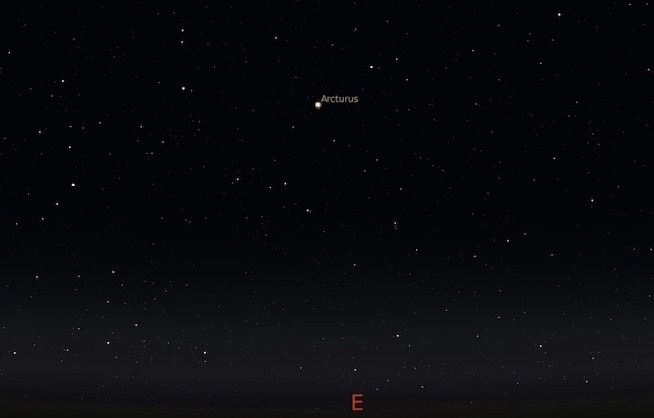 Whenever a witness sees an object that lasts over an hour, an astronomical object has to be considered to be a possible source. In my opinion, this case has to be classified as “probably Arcturus”. Hynek probably considered it but, at this point, I can only assume that he did not want any more negative publicity regarding his explanations for UFO reports.