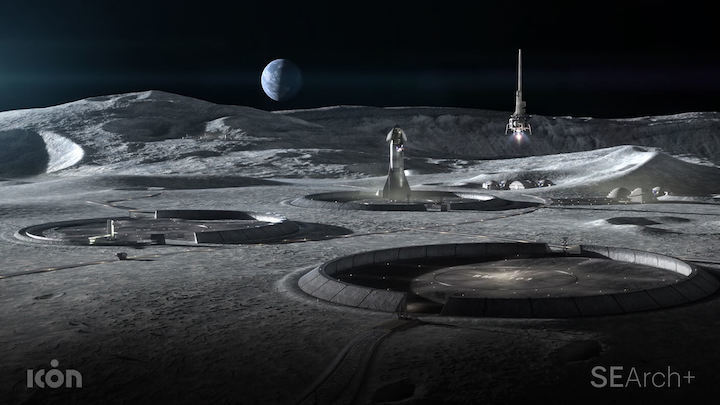 NASA is continuing the work started in its 2018 3D-Printed Habitat Challenge, which sought designs for 3D printing radiation-shielded Martian shelters from the surrounding regolith, a little closer to home. Participants SEArch+, 3D printing, robotics, and advanced materials startup ICON, and the Bjarke Ingels Group (BIG) have all been tapped to research how we might one day build on the moon.

Of course, BIG is far from the first architecture firm to get in the space design game, and SOM, in conjunction with the European Space Agency, revealed their concept for a similar “Moon Village” early last year. BIG also has experience in the arena, as its massive Mars Science City, meant to simulate the environmental conditions on Mars for use as a training ground and research station, is currently under construction in Dubai.

The partnership is part of NASA’s Artemis program, a literal moonshot to put humans on lunar turf by 2024, and the stepping stone to an eventual Mars mission. That means constructing a long-term habitat on the moon—Project Olympus, a 3D-printed, sustainable lunar habitat that will be capable of protecting inhabitants from exposure to radiation, extreme temperature differentials, and the constant pelting of micrometeors.

“Building on our experience with BIG’s Mars Science City,” wrote Martin Voelkle, a partner at BIG, in a press release, “we are working to develop the first permanent structure on the Moon resilient to the hostile lunar environment where the cost of payload transportation requires rigorous efficiency. We have explored various building forms ideal for containing atmospheric pressure and optimized for protection from cosmic and solar radiation. The habitat will be designed with the inherent redundancy required for extraterrestrial buildings, while also using groundbreaking robotic construction that uses only in-situ resources with zero waste left behind. With the technologies and efficiency parameters developed for the construction of extraterrestrial buildings, Project Olympus will also help us to build sustainably on planet Earth as we strive to reduce the carbon footprint of the built environment.”

While scant information on the actual design and construction methodology of Project Olympus has been made public thus far, from the renderings, it looks like BIG has designed a network of short, toroidal structures that would be autonomously constructed and broken into different modules based on usage. Using the technology demonstrated in the 2018 competition, ICON will begin developing and testing prototypes of potential 3D printing techniques at NASA’s Marshall Space Flight Center in Huntsville, Alabama, using artificial lunar soil.

No construction timeline or budget for Project Olympus has been revealed yet.