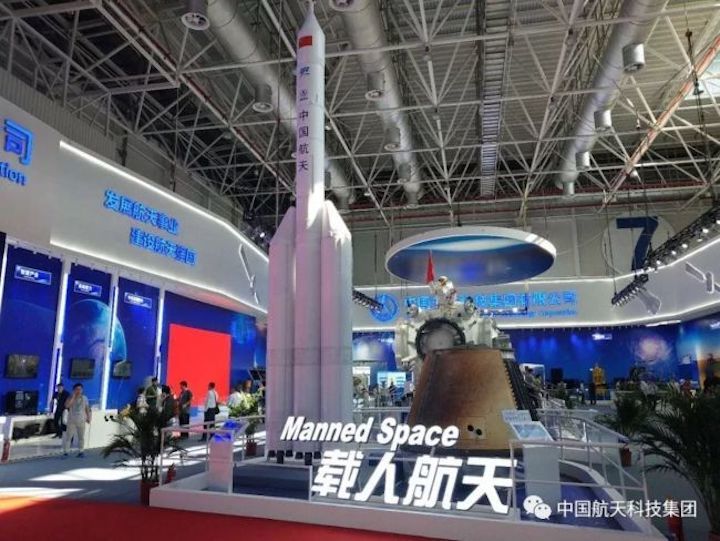 Model of the new launch vehicle for human spaceflight on display in Zhuhai in 2018.
(Image: © CASC)

China has revealed that it is working on a new rocket that could send astronauts to land on the moon.

The new launch vehicle was unveiled at the 2020 China Space Conference in Fuzhou, east China on Sept. 18. The new launcher is designed to send a 27.6 ton (25 metric ton) spacecraft into trans-lunar injection. Mass at liftoff will be about 4.85 million lbs. (2,200 metric tons), nearly triple that of China's current largest rocket, the Long March 5.

The as-yet-unnamed rocket will be 285 feet (87 m) long, with a three-stage central core, and it is being designed at the China Academy of Launch Vehicle Technology (CALT) in Beijing.

China has not yet announced a date for a test flight or a potential lunar landing with the vehicle. However, Zhou added that a number of challenges remain in terms of crewed lunar landings.

"For example, we need our spacecraft to have the ability to reach the moon and return. But the transportation capacity of our Long March rockets cannot satisfy the demands. Currently our Shenzhou spaceships in low Earth orbit are unable to meet the needs of moon landing, either. Also, we need a lander for the mission," Zhou said.

In May, China flew a next-generation crewed spacecraft with the test launch of the new Long March 5B rocket. The new capsule is designed for deep space and lunar missions.

China has not officially approved a program to put astronauts on the moon, but has been talking openly about such missions. Previous mission profiles involved a Long March 9 rocket, expected to be similar in size to NASA's Saturn V or the agency's developing Space Launch System (SLS). The roughly 33-foot-diameter (10 m) rocket would need new rocket body-technology and huge, high-thrust engines and it would make a test flight around 2030.

Superseding the Long March 9 with the new launcher, which first appeared as a concept in 2018, as the preferred method of getting the moon means China may be able to get there quicker.

The new launcher will use clusters of already-developed YF-100K engines and 16.4-foot-diameter rocket bodies similar to the Long March 5, meaning less development work and required breakthroughs.

The vehicle hasn't formally been named but is nicknamed '921 rocket' in China, in reference to the codename for the country's human spaceflight program, which was founded on Sept. 21, 1992.

Decades into its human spaceflight program, China still faces key challenges. China will begin launching modules for its space station next year, but looking further afield brings new barriers. Zhou notes that China lacks "survival ability under extraterrestrial circumstances. We do not have any experience in that yet. Neither do we have ground support capacity. So far our crewed space exploration missions have been focused on tasks in low Earth orbit."

China is also working on a range of new rockets to update its older models that use toxic hypergolic propellant. In addition, the country is looking to implement new capabilities, including rockets that can launch and land again, like the SpaceX Falcon 9. An emerging commercial sector also includes companies such as iSpace and Landspace, which are developing their own vehicles to compete for launch contracts.