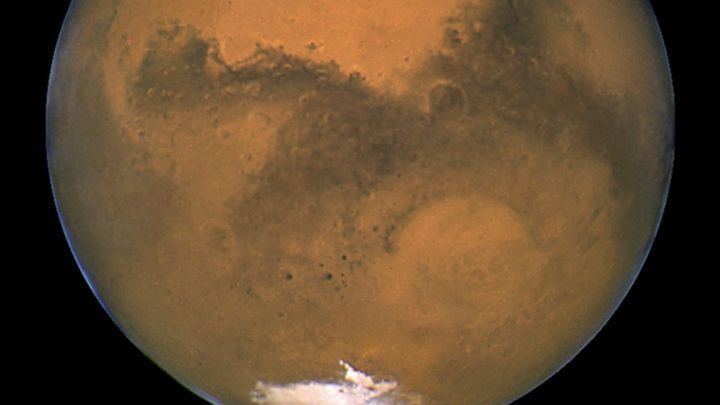 CAPE CANAVERAL, Fla. -- A network of salty ponds may be gurgling beneath Mars’ South Pole alongside a large underground lake, raising the prospect of tiny, swimming Martian life.

Italian scientists reported their findings Monday, two years after identifying what they believed to be a large buried lake. They widened their coverage area by a couple hundred miles, using even more data from a radar sounder on the European Space Agency's Mars Express orbiter.

In the latest study appearing in the journal Nature Astronomy, the scientists provide further evidence of this salty underground lake, estimated to be 12 miles to 18 miles (20 kilometers to 30 kilometers) across and buried 1 mile (1.5 kilometers) beneath the icy surface.

Even more tantalizing, they’ve also identified three smaller bodies of water surrounding the lake. These ponds appear to be of various sizes and are separate from the main lake.

Roughly 4 billion years ago, Mars was warm and wet, like Earth. But the red planet eventually morphed into the barren, dry world it remains today.

The research team led by Roma Tre University's Sebastian Emanuel Lauro used a method similar to what's been used on Earth to detect buried lakes in the Antarctic and Canadian Arctic. They based their findings on more than 100 radar observations by Mars Express from 2010 to 2019; the spacecraft was launched in 2003.

All this potential water raises the possibility of microbial life on — or inside — Mars. High concentrations of salt are likely keeping the water from freezing at this frigid location, the scientists noted. The surface temperature at the South Pole is an estimated minus 172 degrees Fahrenheit (minus 113 degrees Celsius), and gets gradually warmer with depth.

These bodies of water are potentially interesting biologically and "future missions to Mars should target this region," the researchers wrote.

Scientists say the super salty water would significantly improve the likelihood that the red planet just might harbor microscopic life of its own. 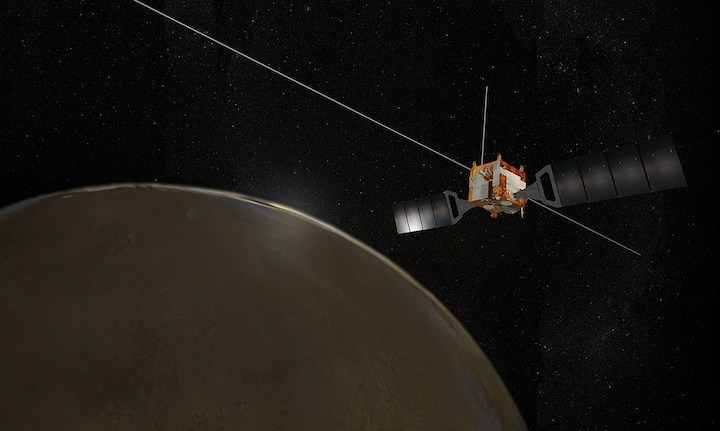 An artist's rendering of the Mars Express, which used ground-penetrating radar to survey parts of Mars.NASA

The existence of liquid water on Mars — one of the more hotly debated matters about our cold, red neighbor — is looking increasingly likely.

New research published Monday in the journal Nature Astronomy indicates that there really is a buried reservoir of super salty water near the south pole. Scientists say such a lake would significantly improve the likelihood that Mars just might harbor microscopic life of its own.

Some scientists remain unconvinced that what's been seen is liquid water, but the latest study adds weight to a tentative 2018 findingfrom radar maps of the planet's crust made by the Mars Express robot orbiter.

That research suggested that an underground "lake" of liquid water had pooled beneath frozen layers of sediment near the south pole — akin to the subglacial lakes detected beneath the Antarctic and Greenland ice sheets on Earth.

Earth's subglacial lakes are teeming with bacterial life, and similar life might survive in liquid reservoirs on Mars, scientists have speculated.

"We are much more confident now," said Elena Pettinelli, a professor of geophysics at Roma Tre University in Italy, who led the latest research and the earlier study. "We did many more observations, and we processed the data completely differently."

Pettinelli and her team processed 134 observations of the region near the south pole with ground-penetrating radar from the Mars Express orbiter from 2012 to 2019, more than four times as many as before, covering a period of time more than twice as long.

They then applied a new technique to the observation data that has been used to find lakes beneath the Antarctic ice sheet, as well as an older technique used in the 2018 study.

Both methods indicate that there is a "patchwork" of buried reservoirs of liquid in the region, Pettinelli said — a large reservoir about 15 miles across, surrounded by several smaller patches up to 6 miles across.

The researchers can't tell how deep the reservoirs go, but they begin about a mile below the surface, she said.

And while the radar doesn't show what they're made of, they are probably "hypersaline" solutions — water saturated with perchlorate salts of calcium, magnesium, sodium and potassium — that keep them liquid at minus 90 degrees Fahrenheit and below, Pettinelli said.

The new study of a potential underground niche for life on Mars comes just a few weeks after scientists reported finding potential signs of life in the clouds of Venus.

If there really are buried bodies of liquid water, they might be a prime spot where microbial alien life could survive on Mars, perhaps a remnant of the life that might have existed there billions of years ago if Mars had seas of water on its surface.

Liquid water is a key ingredient for life as we know it, althoughexotic chemistries for life based on hydrocarbons or carbon dioxide have also been proposed.

Mars is now thought to be bone dry, but moisture in its atmosphere freezes during Martian winters as water ice above the permanent carbon dioxide ice caps at the north and south poles.

If the discovery is verified, it would be the first time liquid water has been found on Mars, and it would have a profound impact on the search for extraterrestrial life.

Steve Clifford of the Planetary Science Institute, a nonprofit based in Tucson, Arizona, said he agrees that an underground body of water is the most plausible explanation for the radar observations by Mars Express, but he argued that it might not be as cold or as salty as the researchers suggest.

Clifford, who worked on the Mars Express mission but wasn't involved in the new study, said he thinks the underground liquid could be created by heat from the planet's hot interior melting the icy sediments in the same way that geothermal heat melts the base of the Antarctic ice sheet in some regions.

That would mean that the underground reservoirs on Mars needn't be extremely salty to stay liquid, he said.

Not everyone is convinced by the new study, however.

Planetary scientist Jack Holt of the University of Arizona's Lunar and Planetary Laboratory in Tucson said in an email that Mars was probably much too cold for even hypersaline water to exist as a liquid and that if it did, then liquid water would also exist in regions that looked the same in the radar maps.

"If we apply the same interpretation, then there should be springs flowing out along the edge of the polar cap," he said. "And that is not the case."

Holt works with radar on the Mars Reconnaissance Orbiter, which has seen no signs of liquid water. The Mars Express researchers suggest that it is using the wrong radar wavelengths to see them.

Holt also said any description of buried "lakes" of water is misleading: "At best, patchy wet sediment," he said. "But even that is a stretch."

Remember the possible saline lake found underneath Mars’s south pole? New analysis of data from the European Space Agency’s Mars Express has made that conclusion more plausible — with a little help from underground lakes in Greenland.

About two years ago, scientists announced the exciting discovery of a bright reflecting sheet underneath the layered dusty ice of Mars’ south polar cap. The team behind that discovery, led by Roberto Orosei (National Institute of Astrophysics, Italy), examined 29 radar images from the Mars Express orbiter, which had crisscrossed the region over four years.

New work published in Nature Astronomy by Sebastian Lauro (Roma Tre University, Italy) and colleagues — all working in the same research group as the team that made the initial discovery — examines an 134 radar images taken over 10 years.

The researchers not only confirmed the probable presence of a lake, they found that it has friends: the “large body of water [is] encircled by patchy water pools or wet areas of smaller extent,” they write. The largest putative lake is about 20 kilometers (12 miles) across; the smaller patches appear as 5- to 15-kilometer-wide spots.

WHAT GREENLAND AND MARS HAVE IN COMMON

The new work does not just improve on the prior work by adding more data. The team also employed a totally different analysis technique, originally developed for use on Earth.

The first detections of subglacial lakes on our home planet came from evidence for large, isolated bodies of water underneath Antarctic ice sheets. But the detection methods developed for Antarctica failed to work in Greenland, where the subglacial water is patchy, intermixed with areas of either permafrost  or dry sub-ice conditions.

So Earth scientists working in Greenland developed a new method to search for subglacial liquids. They looked not only at the brightness of the reflection — as Orosei and coworkers did in the 2018 study — but also at the smoothness of the reflection surface and how those qualities varied from spot to spot. They found that brightly reflective places also tended to be very smooth. These regions also had relatively constant brightness and smoothness, while the qualities varied more outside them. Here on Earth, under Greenland’s ice, this correlation is good evidence for the presence of sub-glacial lakes. At Mars, the same is probably true.

The initial discovery of a salty lake underneath layers of ice and dust at Mars's south pole came from radar signals from the European Space Agency's Mars Express orbiter, shown here. The bright horizontal line at the top corresponds to the icy surface of Mars; below that are about 1.5 kilometer's worth of layers of ice and dust. The brightest layer at the bottom, seen in several radar images crisscrossing this region was interpreted as a pond of liquid water. New data strengthen the case for such salty underground ponds on Mars.
ESA / NASA / JPL / ASI / Univ. Rome; R. Orosei et al. 2018

There remains the problem of explaining how Mars can host liquids beneath the layered deposits at its south pole, where the temperatures must be very, very low, possibly as low as 150 K (-120°C or -190°F). Some researchers argue that’s just too cold: There would have to be extra heat coming from deep beneath the surface, possibly from volcanism. Others point to experiments showing that hypersaline brines, carrying large quantities of salty minerals like the perchlorates that Phoenix found at its polar landing site, can have very low melting temperatures. Moreover, such brines are capable of supercooling (remaining liquid at temperatures below their melting points).

Ultimately, the conditions that are enabling this underground water source to remain liquid are “at best, a matter of speculation at this point in time,” the researchers write. Regardless of how liquids exist, the evidence for sub-ice liquid water ponds is strong.

Such ponds could serve as refugia for Martian life. Hypersaline liquids are not every microbe’s paradise, but there are extremophiles that thrive in similar (though, admittedly, not as cold or as saline) environments on Earth. Under their thick blankets of dust and ice, any Mars life in such a lake would be protected both from the harmful effects of cosmic rays and from seasonal variations in temperature. It would be cold, and dark, and exceedingly salty, but stable and safe from environmental change.

They’d also be hard to reach, lying more than 1,200 meters (4,000 feet) beneath alternating layers of ice and dust in one of the coldest locations on Mars. The protective blanket of layered deposits would protect any Martian life from human interest, for now. But someday, we may send a submersible to explore this sheltered Martian habitat. Just imagine what we could find down there.