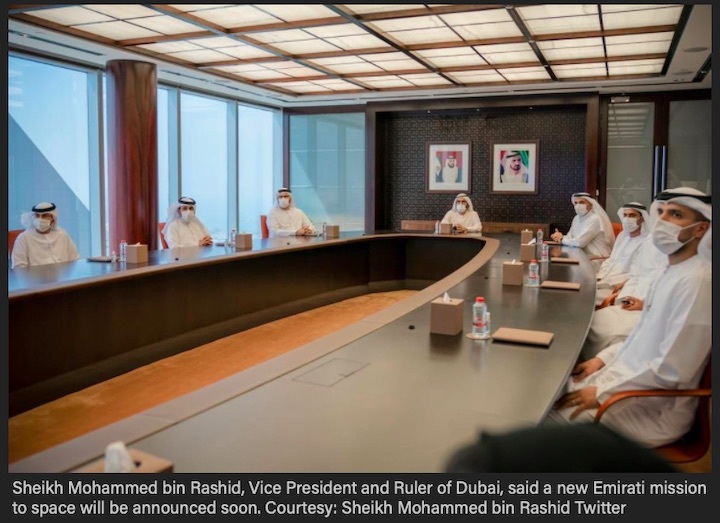 Emirati-built satellites and an outer space simulation centre for training are some of the plans included in the Mohammed bin Rashid Space Centre’s 10-year strategy.

Space missions listed in the strategy included the Hope Probe, which launched from Japan in July but will reach Mars in February 2021, more Environmental Monitoring Nanometric Satellites; the Emirates Moon Exploration Project, and a second mission for astronauts.

The Emirates Moon Exploration Project aims to send the first Arab mission "with national competencies" to the Moon by 2024.

It is unclear whether that would be a manned or unmanned mission, however, the US plans to put the first woman and next man on the Moon by 2024 with its Artemis programme.

Further details would be announced in due course, Sheikh Mohammed wrote on Twitter.

“I reviewed the plan of the Mohammed bin Rashid Space Centre for the next 10 years. We have new space missions that we will announce soon,” he said on Saturday.

“And programmes to develop new specialised satellites and an outer space simulation centre will be built for training and academic and educational programmes, with universities to build a new scientific and technical culture.”

The country's latest space mission was revealed a day after the nation celebrated the one-year anniversary of the UAE’s first astronaut going to the International Space Station.

The MBRSC's research and development plans include building the Innovation and Development Centre, food security research in space, the Emirates Space Simulation Programme, and the Mars Science City project.

And the sustainability section listed a space entrepreneurs programme, the International Astronautical Congress, and the World Organisation for Sustainability in Space.

"The UAE's ambition in the space sector explores, plans and makes the future. Our youth, engineers and pioneers open new horizons in the science, technology and innovation fields in this vital sector for the future of our world," said Sheikh Mohammed.

"The space sector in the country represents a tributary to the Arab space sector with the experiences it has gained and the knowledge it has developed and the strategic partnerships it has held. Its future programmes for training national cadres in the space sector and building satellites will be supported by knowledge, data and innovations academic and scientific research institutions in the Arab world and the world for the benefit of mankind."

He said the Emirati space programme was sustainable and would produce outputs that would have practical applications across other sectors.

Professionals from these sectors will share their experiences with the rest of the country and the region, Sheikh Mohammed said.

"It will build international knowledge partnerships that will benefit humanity."

The announcement came as Maj Al Mansoori and the UAE's reserve astronaut Dr Sultan Al Neyadi undergo a 30-month training programme at the Johnson Space Centre in Houston under Nasa.

Once they graduate, they will be able to participate in long-hauls space missions and carry out spacewalks.

Two new Emirati astronauts will join the next batch of Nasa’s Astronaut Candidate Training Programme once they are selected by the UAE next year.

Currently, only SpaceX and Russia’s Soyuz can deliver humans to the ISS. The US also has plans to reach the moon using the US Space Launch System.

“It is a next chapter for us and the UAE astronaut programme be training in Houston,” Maj Al Mansoori had told The Nationalin an exclusive interview on the first anniversary of his space mission.

“Within one year of my mission, we’ve started training. This type of programme is a big message to the whole world that we are serious and we want to be part of space exploration and flights."

He said that the UAE would want to be part of US’ Artemis programme.

Dr Al Neyadi also said the UAE could be a key player in that mission.

“Hopefully, this [the training] will be just the beginning – there are many good plans of going back to the moon. I think the UAE will be a key player for that as well. We are ready and we’re happy to be here,” he said.

“As you know the UAE's last mission was a short flight. The training we conducted in Russia was for that mission and it was successful. Now, the goal is to spend more time on the ISS and be engaged with different activities like spacewalk and maintaining the station.”