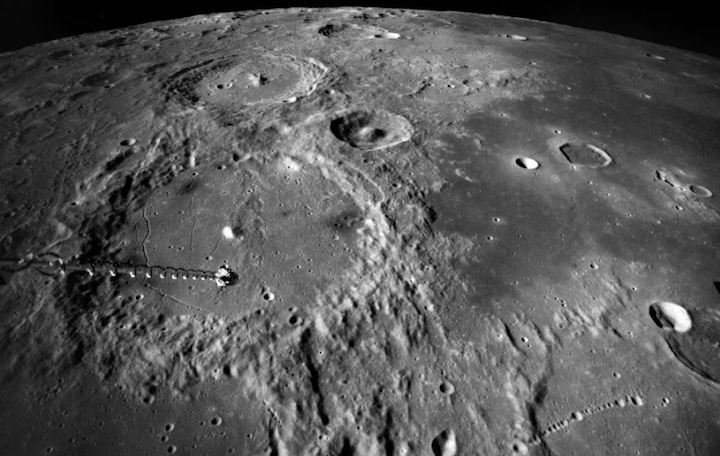 This image of the moon's Alphonsus crater shows some of the deposits analyzed for this study as dark splotches around the elongated depressions within the crater. This image was taken by Ken Mattingly from the Command/Service module during the Apollo 16 mission. Credit: NASA

As humans continue to explore the solar system and beyond, the moon is frequently targeted as a nearby location for resources that can help extend and enhance space missions to other destinations. And yet, we are still discovering the geologic history of the moon itself, how it was formed, and how it reached its present state.

In a study recently published in Earth and Planetary Science Letters, Arizona State University researchers Amber Keske, Amanda Clarke and Mark Robinson of the School of Earth and Space Exploration have demonstrated that the early moon may have been more volatile-rich than previously thought.

“Pyroclastic (explosive) volcanoes are known to have existed on the early moon, but it was unknown how big the volcanoes were or how much magma was erupted,” said Keske, who was a graduate student at ASU when this research was conducted and is now an electro-optical engineer in the private sector.

Using high resolution images collected from the ASU-led Lunar Reconnaissance Orbiter Camera(LROC), the team was able to do a detailed survey of 23 of the moon’s pyroclastic volcanoes from 11 different sites. With careful analysis of 3D models derived from LROC stereo images, they were able to determine the history of the eruptions, how the volcanic material was distributed and estimate the volume of magma and gases erupted.

“Pyroclastic deposits are key for understanding the lunar mantle,” said Robinson, who is the principal investigator for the Lunar Reconnaissance Orbiter Camera. “Small samples of pyroclastic materials were returned by Apollo astronauts and it was found that their source magmas originated from deep within the mantle. As NASA pivots towards lunar exploration these deposits are now more important, not only for filling in holes in our understanding of the how the mantle and crust evolved, but these fascinating deposits may also hold valuable resources available to future explorers.” 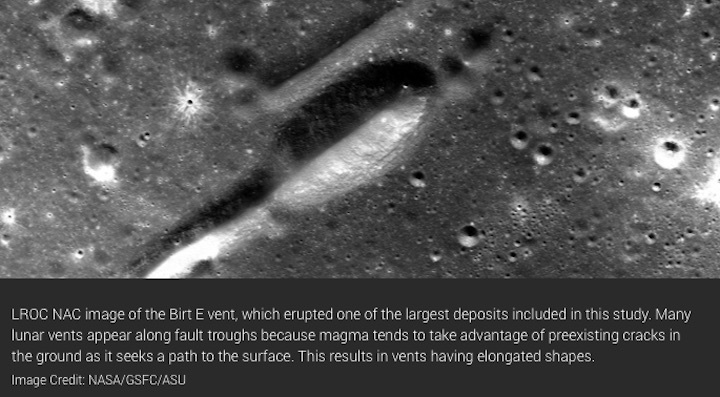 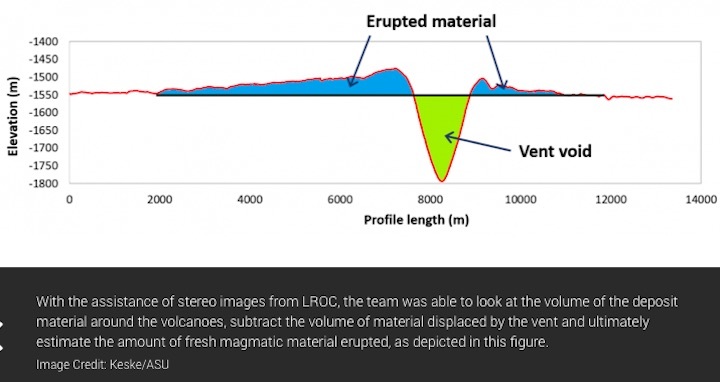 Some previous studies concluded that lunar volcanoes had erupted mostly cold bedrock, blasted out by trapped gases. But with the assistance of stereo images from LROC, the team was able to look at the volume of the deposit material around the volcanoes, subtract the volume of material displaced by the vent and ultimately estimate the amount of fresh magmatic material erupted. “There was much more diversity in the origin of explosive products on the moon than had been previously thought,” said Keske.

The research included a detailed survey of 23 of the moon’s pyroclastic volcanoes from 11 different sites, including Lassell H shown here. Credit: NASA/GSFC/ASU

“Some of the deposits we analyzed are significantly large in volume and represent violent and potentially long-lived explosive events or eruptive periods,” said co-author and volcanologist Clarke. “These are comparable to, or larger in volume, than the cataclysmic 1991 eruption of Mount Pinatuboin the Philippines.”

And these eruptions were indeed found to be violent. Most of the fire fountains of magma from these volcanoes would have been around a mile high, with some of the largest reaching up to almost five miles high. For perspective, that is about 60 to 250 times taller than the fountains shown in this 2018 eruption of Kilauea. Such high fountains, according to the study, require significant amounts of magmatic volatiles such as carbon dioxide, carbon monoxide and/or water.

While this study involved a small subset of volcanoes on the moon, it is important in providing data for future modeling efforts. “The moon’s geologic history is intertwined with Earth’s,” said Keske. “And studies like this add to our understanding of how the moon developed and help us understand the history of our planet.”