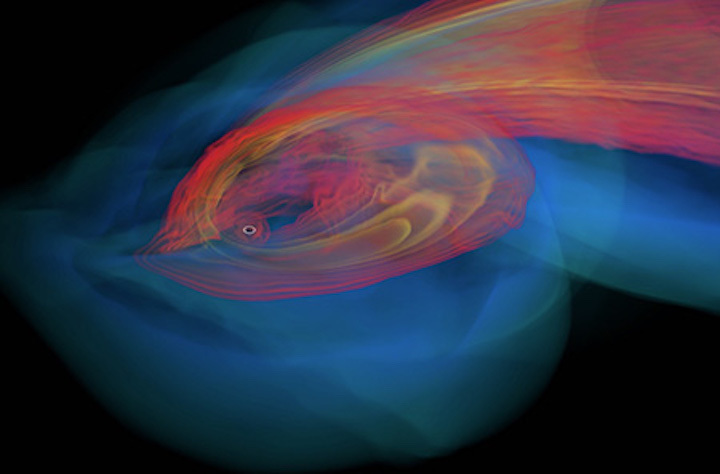 This image from a computer simulation shows the rapid formation of an accretion disk during the disruption of a star by a supermassive black hole. (Image credit: Jamie Law-Smith and Enrico Ramirez-Ruiz)

When a star passes too close to a supermassive black hole, tidal forces tear it apart, producing a bright flare of radiation as material from the star falls into the black hole. Astronomers study the light from these “tidal disruption events” (TDEs) for clues to the feeding behavior of the supermassive black holes lurking at the centers of galaxies.

New TDE observations led by astronomers at UC Santa Cruz now provide clear evidence that debris from the star forms a rotating disk, called an accretion disk, around the black hole. Theorists have been debating whether an accretion disk can form efficiently during a tidal disruption event, and the new findings, accepted for publication in the Astrophysical Journal and available online, should help resolve that question, said first author Tiara Hung, a postdoctoral researcher at UC Santa Cruz.

“In classical theory, the TDE flare is powered by an accretion disk, producing x-rays from the inner region where hot gas spirals into the black hole,” Hung said. “But for most TDEs, we don’t see x-rays—they mostly shine in the ultraviolet and optical wavelengths—so it was suggested that, instead of a disk, we’re seeing emissions from the collision of stellar debris streams.”

Coauthors Enrico Ramirez-Ruiz, professor of astronomy and astrophysics at UCSC, and Jane Dai at the University of Hong Kong developed a theoretical model, published in 2018, that can explain why x-rays are usually not observed in TDEs despite the formation of an accretion disk. The new observations provide strong support for this model.

“This is the first solid confirmation that accretion disks form in these events, even when we don’t see x-rays,” Ramirez-Ruiz said. “The region close to the black hole is obscured by an optically thick wind, so we don’t see the x-ray emissions, but we do see optical light from an extended elliptical disk.”

The telltale evidence for an accretion disk comes from spectroscopic observations. Coauthor Ryan Foley, assistant professor of astronomy and astrophysics at UCSC, and his team began monitoring the TDE (named AT 2018hyz) after it was first detected in November 2018 by the All Sky Automated Survey for SuperNovae (ASAS-SN). Foley noticed an unusual spectrum while observing the TDE with the 3-meter Shane Telescope at UC’s Lick Observatory on the night of January 1, 2019.

“My jaw dropped, and I immediately knew this was going to be interesting,” he said. “What stood out was the hydrogen line—the emission from hydrogen gas—which had a double-peaked profile that was unlike any other TDE we’d seen.”

Foley explained that the double peak in the spectrum results from the Doppler effect, which shifts the frequency of light emitted by a moving object. In an accretion disk spiraling around a black hole and viewed at an angle, some of the material will be moving toward the observer, so the light it emits will be shifted to a higher frequency, and some of the material will be moving away from the observer, its light shifted to a lower frequency.

“It’s the same effect that causes the sound of a car on a race track to shift from a high pitch as the car comes toward you to a lower pitch when it passes and starts moving away from you,” Foley said. “If you’re sitting in the bleachers, the cars on one turn are all moving toward you and the cars on the other turn are moving away from you. In an accretion disk, the gas is moving around the black hole in a similar way, and that’s what gives the two peaks in the spectrum.”

The team continued to gather data over the next few months, observing the TDE with several telescopes as it evolved over time. Hung led a detailed analysis of the data, which indicates that disk formation took place relatively quickly, in a matter of weeks after the disruption of the star. The findings suggest that disk formation may be common among optically detected TDEs despite the rarity of double-peaked emission, which depends on factors such as the inclination of the disk relative to observers.

“I think we got lucky with this one,” Ramirez-Ruiz said. “Our simulations show that what we observe is very sensitive to the inclination. There is a preferred orientation to see these double-peak features, and a different orientation to see x-ray emissions.”

He noted that Hung’s analysis of multi-wavelength follow-up observations, including photometric and spectroscopic data, provides unprecedented insights into these unusual events. “When we have spectra, we can learn a lot about the kinematics of the gas and get a much clearer understanding of the accretion process and what is powering the emissions,” Ramirez-Ruiz said.

In addition to Hung, Foley, Ramirez-Ruiz, and other members of the UCSC team, the coauthors of the paper also include scientists at the Niels Bohr Institute in Copenhagen (where Ramirez-Ruiz holds a Niels Bohr Professorship); University of Hong Kong; University of Melbourne, Australia; Carnegie Institution for Science; and Space Telescope Science Institute. 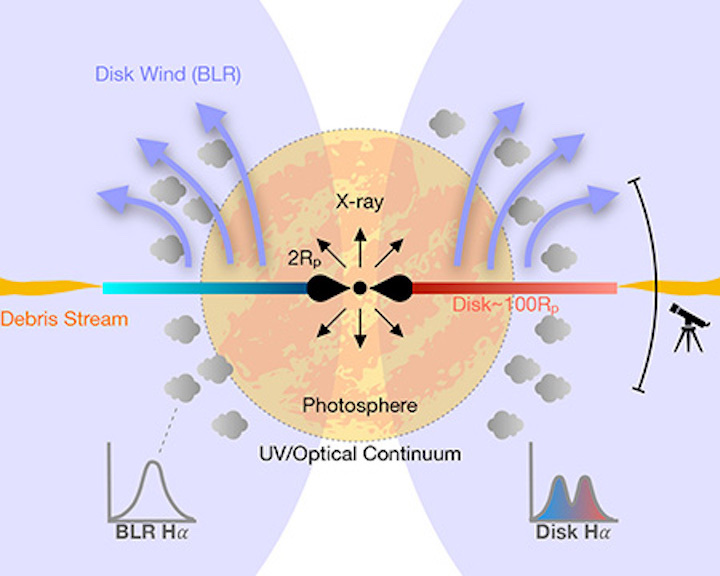 A model of ultraviolet and optical emission from the tidal disruption event AT 2018hyz is shown in this schematic diagram. As an accretion disk forms quickly after the TDE, it generates x-ray emission (black arrows) at small radii, which is only visible through the vertical funnel. In other directions, x-rays are reprocessed by the photosphere or wind, powering the ultraviolet and optical emissions. Hydrogen emission is produced at two distinct sites outside of the photosphere: a large elliptical disk (color-coded by velocity to show rotation) joined by the fallback material, and a broad emission line region (BLR) that is likely created by a radiation-driven wind (purple shaded area)
Quelle: THE UNIVERSITY OF CALIFORNIA
Astronomie - New observations of black hole devouring a star reveal rapid disk formation
« Zum vorherigen Eintrag Zum nächsten Eintrag »
580 Views
Created with page4