Hundreds of astronomers have warned that satellite constellations like Elon Musk‘s Starlink network could prove “extremely impactful” to astronomy and scientific progress.

A report by the Satellite Constellations 1 (Satcon1) workshop found that that constellations of bright satellites will fundamentally change ground-based optical and infrared astronomy and could impact the appearance of the night’s sky for stargazers around the world.

The research brought together more than 250 astronomers, satellite operators and dark-sky advocates to better understand the astronomical impact of large satellite constellations.“We find that the worst-case constellation designs prove extremely impactful to the most severely affected science programs,” stated the report, which was published on Tuesday.

Elon Musk’s SpaceX plans to launch more than 30,000 Starlink satellites in order to beam high-speed internet down to Earth. The report warned that “Starlink alone may roughly double the number of space-based moving objects detectable by the unaided eye around twilight.”

Options to reduce the impact include “darken them”, “keep them low”, “orient them to reflect less sunlight”, but number one on the list was “don’t launch them”. 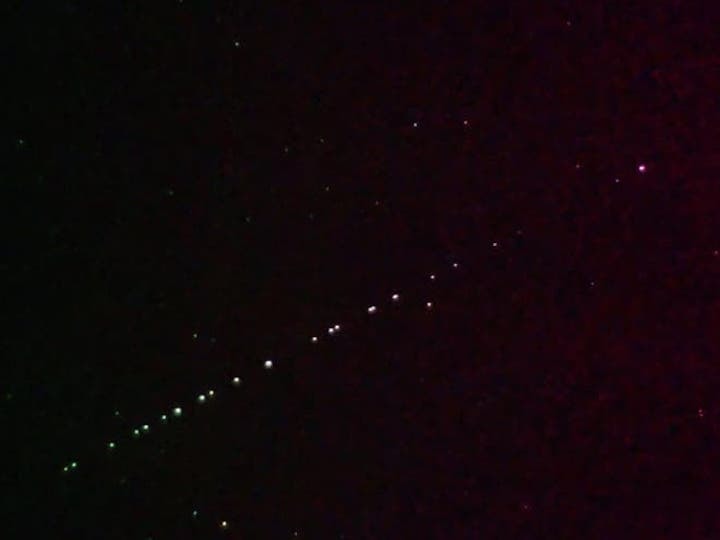 SpaceX has been frequently blamed for disrupting views of the night’s sky with its growing network of Starlink satellites, which currently number around 500. Early launches in 2019 triggered hundreds of UFO reports due to their unusual formation, with some astronomers comparing them to a “string of bright pearls”.

The private space firm was criticised last month for blocking the view of the Comet Neowise as it made its once-every-6800-year journey past Earth.

Some timelapse images of the comet and other celestial objects appeared with long streaks caused by the low-orbit strings of Starlink satellites.

The Starlink project aims to provide high-speed internet to under-served parts of the world, starting with remote areas of Canada before spreading coverage down to the equator as more satellites launch.

SpaceX has deployed a variety of tactics to reduce the visibility of its satellite network, including painting them black and twisting the position of their solar panels to make them less reflective.

The American Astronomical Society (AAS), which hosted Tuesday’s Satcon 1 event, worked with SpaceX to test and develop different methods to address the issue. SpaceX told The Independent that it also worked with the National Radio Astronomy Observatory (NROA) and the Green Bank Observatory (GBO) to minimise the impact of its satellites.

“However, even if that works, the satellite trails themselves will clearly be in the data – complicating data analysis and limiting discoveries,” he said.

“With tens of thousands of low-Earth orbit satellites, we find that generally no combination of mitigations can completely avoid the impacts of satellite trails on the science programs of the coming generation of optical astronomy facilities.”