Life is asymmetrical, and a time capsule of the earliest days of the solar system may explain why. 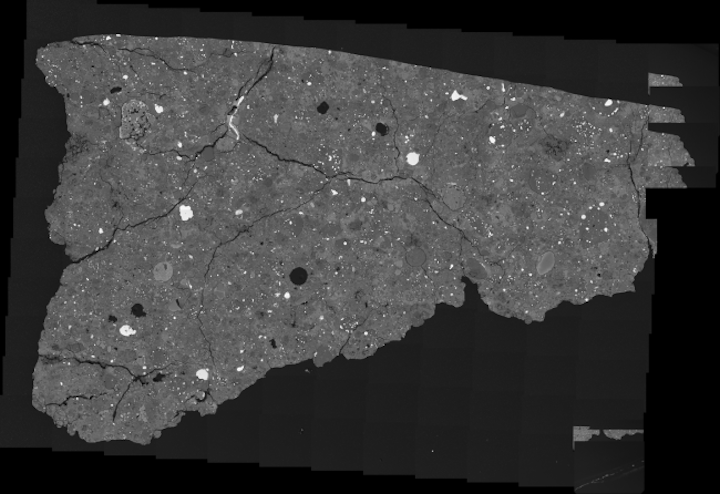 An image of a piece of the Antarctic meteorite Asuka 12236 as seen through a microscope; the sample is about 0.3 inches (1 centimeter) across.
(Image: © Carnegie Institution for Science/Conel M. O'D. Alexander)

A time capsule of the earliest days of the solar system may be the first clue in explaining a long-standing puzzle for those who study life: It appears to be stubbornly asymmetrical.

The story begins in 2012, when scientists discovered a golf-ball-sized hunk of rock now known as Asuka 12236 on the icy expanses of Antarctica. Asuka 12236 wasn't just any rock, it was a space rock — and not just any space rock either. Researchers think it's a particularly old meteorite, perhaps containing material even older than our solar system, and that makes it the stuff of scientists' dreams.

"It's fun to think about how these things fall to Earth and happen to be full of all this different information about how the solar system formed, what it formed from, and how the elements built up in the galaxy," Conel M. O'D. Alexander, a meteorite scientist at the Carnegie Institution for Science in Washington, D.C., and co-author on the new research, said in a NASA statement.

And when scientists ground up a tiny chunk of Asuka 12236 and compared the results with other meteorite samples, they realized this particular space rock stood out. In fact, it could hold the key to a longstanding mystery about life. Life, it turns out, is asymmetrical at a very tiny level. Amino acids — the building blocks of proteins, the large molecules that run our bodies and everyone else's — each come in two mirror-image forms, which scientists have dubbed left- and right-handed. But all the life that scientists have studied uses exclusively left-handed amino acids; right-handed versions of these molecules exist but don't make it into proteins. No one knows why.

Asuka 12236, the scientists realized, was particularly rich in amino acids, and just like life, the amino acids in the meteorite favored left-handedness. But unless the sample was contaminated by terrestrial life — always a possibility scientists must consider — there must be some other reason for the imbalance in the meteorite.

"The meteorites are telling us that there was an inherent bias toward left-handed amino acids before life even started," Daniel Glavin, lead author on the new research and an astrobiologist at NASA's Goddard Space Flight Center in Maryland, said in the same statement. "The big mystery is why?"

Glavin and his colleagues suspect that the key may lie in what happened to the meteorite back when it was a part of an asteroid whizzing through space. Inside asteroids, forces like water and heat can affect the chemistry of the space rock, including producing — but also destroying — amino acids.

Some particular balance of such effects is likely responsible for the unusually high levels of amino acids in Asuka 12236 and may also explain the asymmetry between left- and right-handed varieties, as compared with other meteorites.

"It is pretty unusual to have these large left-handed excesses in primitive meteorites," Glavin said. "How they formed is a mystery. That's why it's good to look at a variety of meteorites, so we can build a timeline of how these organics evolve over time and the different alteration scenarios."

And if the imbalance in the meteorite isn't the result of terrestrial contamination, the same process responsible may also address the mystery of life's asymmetry, the researchers hope. Glavin and his colleagues are going to keep looking at meteorites in hopes of better understanding how amino acids manifest in space rocks.

But the researchers have another tactic up their sleeve as well: sample-return missions, the spacecraft-enabled equivalent of meteorite deliveries. Unlike meteorites, spacecraft-carried samples can be protected from the harsh journey through Earth's atmosphere, keeping the rock more pristine than even the best-preserved meteorite.

Two asteroid missions are currently working on just such deliveries: NASA's OSIRIS-REx, which is preparing to grab a sample of an asteroid called Bennu, and Japan's Hayabusa2, which is trekking back to Earth with pieces of an asteroid called Ryugu to deliver home in December. Conducting similar analysis on these samples may help scientists better understand how amino acids form and change in space rocks, the researchers hope.

The research is described in a paper published on Aug. 20 in the journal Meteoritics & Planetary Science.