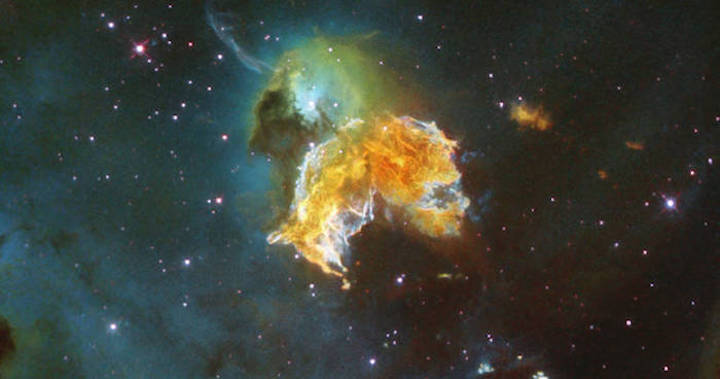 LAWRENCE — Between a decline in biodiversity and a series of extinction events, the Late Devonian period was not the most hospitable time on Earth.

And then came one or more supernovae explosions whose resulting ionizing radiation was the final push that spelled the end for armored fish, most trilobites and other life.

In a paper published Aug. 18 in PNAS, three University of Kansas researchers and their colleagues lay out such a scenario for end-Devonian extinctions.

“For more than a decade, my colleagues and I have been interested in the possibility of ionizing radiation events causing extinction events on Earth,” said Adrian Melott, professor emeritus of physics & astronomy at the University of Kansas.

Previous findings had pointed to this final extinction event of the Devonian happening in tandem with a drop in ozone in Earth’s stratosphere.

“When I heard about the evidence for ozone depletion at the end–Devonian, it triggered thoughts about the possibility of a chain of nearby supernovae,” Melott said.

Previous research had pointed to other possible causes for the ozone depletion, such as global warming, but not astrophysical sources like exploding stars.

However, a fellow KU researcher had findings that suggested otherwise. Brian Thomas, an adjunct researcher in physics & astronomy and professor of physics at Washburn University, had shown that atmospheric warming and the resulting injection of water into the lower stratosphere — suggested as a mechanism to cause the ozone depletion — were just not tenable.

Moreover, another KU researcher, Bruce Lieberman, had further findings that pointed to an astrophysical cause. Lieberman, a professor of ecology & evolutionary biology, had previously emphasized that the end-Devonian extinctions were part of a long period of diversity decline. This prolonged decline is then followed by evidence of pollen malformations, suggesting ionizing radiation as the cause.

That left a series of supernovae as the only tenable possibility, Melott said.

The supernovae that triggered end-Devonian extinction would have been close enough to cause some radiation damage on Earth, but not close enough for life-shattering damage.

“The cosmic rays from such a supernova will produce muons in the atmosphere, which are a very penetrating kind of radiation,” Melott said. “They could cause internal damage in large animals and in organisms up to a half-mile down in the ocean.”

The major ionization of the lower atmosphere may have led to a lot of lightning, he said, which could start fires and change the climate.

The KU researchers’ collaborators on the paper came from the University of Illinois, King's College London, European Organization for Nuclear Research (CERN), Estonia's National Institute of Chemical Physics and Biophysics and the U.S. Air Force Academy.