Solar flares emit sudden, strong bursts of electromagnetic radiation from the Sun's surface and its atmosphere, and eject plasma and energetic particles into inter-planetary space. Since large solar flares can cause severe space weather disturbances affecting Earth, to mitigate their impact their occurrence needs to be predicted. However, as the onset mechanism of solar flares is unclear, most flare prediction methods so far have relied on empirical methods.

The research team led by Professor Kanya Kusano (Director of the Institute for Space-Earth Environmental Research, Nagoya University) recently succeeded in developing the first physics-based model that can accurately predict imminent large solar flares. The work was published in the journal Science on July 31, 2020.

The new method of flare prediction, called the kappa scheme, is based on the theory of "double-arc instability," that is a magnetohydrodynamic (MHD) instability triggered by magnetic reconnection. The researchers assumed that a small-scale reconnection of magnetic field lines can form a double-arc (m-shape) magnetic field and trigger the onset of a solar flare (Fig. 1). The kappa scheme can predict how a small magnetic reconnection triggers a large flare and how a large solar flare can occur. 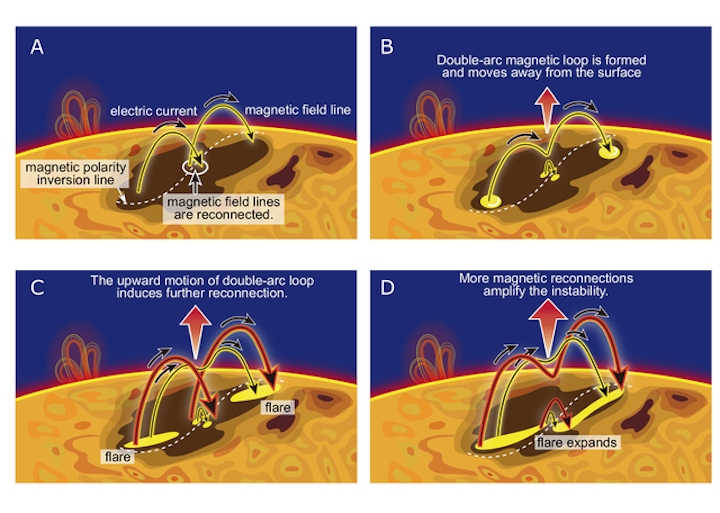 The predictive model was tested on about 200 active regions during solar cycle 24 from 2008 to 2019 using data obtained by NASA's Solar Dynamics Observatory (SDO) satellite. It was demonstrated that with few exceptions, the kappa-scheme predicts most imminent solar flares, as well as the precise location they will emerge from (Fig. 2). The researchers also discovered that a new parameter -- the "magnetic twist flux density" close to a magnetic polarity inversion line on the solar surface -- determines when and where solar flares probably occur and how large they are likely to be. 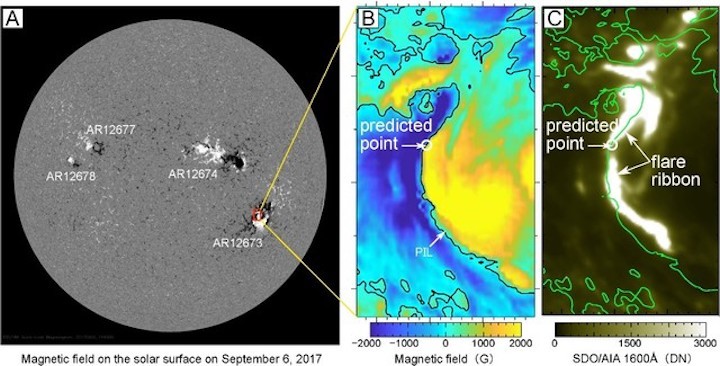 Figure 2: The magnetic field on the solar surface and the initial brightening of the largest solar flare (GOES class X9.3) during solar cycle 24 in NOAA Active Region (AR) 12673 on Sep. 6, 2017. This was observed by the Helioseismic and Magnetic Imager (HMI) and the Atmospheric Imaging Assembly (AIA) onboard the NASA's Solar Dynamics Observatory (SDO) satellite. A: The magnetic field on the solar surface before the onset of the large flare at 11:45 UT. White and black indicates the intensity of the magnetic field along the line of sight out of and toward the plane. B: An expanded view of the  vertical magnetic field in AR 12673. A white circle indicates the location where a large flare was predicted by this study. The black contour shows the magnetic polarity inversion (PIL). C: Bright flare ribbon observed by SDO/AIA1600Å at 11:52 UT. Figures B and C are based on Fig.3 of the research paper by Kusano et al. (2020), published in Science.

(Courtesy of NASA/SDO the AIA and HMI science teams)

Previous flare prediction methods have relied on empirical relations in which the predictions of the previous day tend to continue into the next day even if flare activity changes. In contrast, the kappa-scheme predicts large solar flares through a physics-based approach regardless of previous flare activity. While it takes a lot more work to implement the scheme in real-time operational forecasting, this study shows that the physics-based approach may open a new direction for flare prediction research.