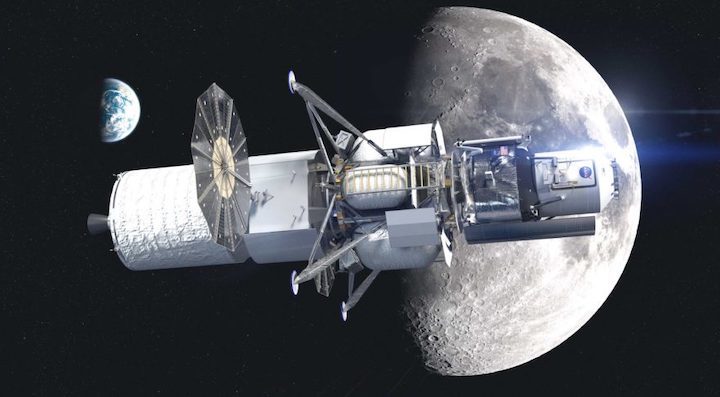 DIU space director Butow: “We have the power where it make sense of leveraging and using public private partnerships to our advantage.”

WASHINGTON — The competition for the moon between the Unites States and China is being closely watched by the Defense Department as the military expects to play a role protecting U.S. access to cislunar space.

One concern for the Pentagon is the possibility that China establishes a presence on the moon before the United States and tries to set the international rules of behavior in space, said Brig. Gen. Steven Butow, director of the space portfolio at the Defense Innovation Unit.

DIU is a Defense Department organization based in Silicon Valley that works with commercial vendors developing technologies relevant to national security.

“Competition is a good thing, but hopefully there’ll be opportunities for cooperative uses of space,” Butow said on Wednesday at the Ascend virtual conference hosted by the American Institute of Aeronautics and Astronautics.

Laws are set by precedent, said Butow. What nations do in space will frame any future international space law, he added. “One of the things we don’t want is to let our competitors and adversaries go out and establish the precedent of how things are going to be done in the solar system, starting with the moon.”

The issue was raised in a “state of the space industrial base” report published last month by DIU, the Air Force Research Laboratory and the U.S. Space Force.

“As space activities expand beyond geosynchronous orbit, the first nation to establish transportation infrastructure and logistics capabilities serving GEO and cislunar space will have superior ability to exercise control of cislunar space and in particular the Lagrange points and the resources of the moon,” the report said.

Control of lunar resources such as hydrogen and oxygen for propellant, the report said, will be key to “enable overall space commercial development.”

“China has a grand strategy for this,” said Butow.

He noted that China’s space strategy integrates government, industry and academia. So in order to compete, the United States has to figure out how to marshal the resources of the private sector in a free market economy.

In the Defense Department, said Butow, “we have the power where it make sense of leveraging and using public private partnerships to our advantage.”

DIU for example has funded about $200 million worth of space projects with commercial companies that resulted in an additional $2.5 billion in private investment poured into those projects.

“This is a strategic advantage for the United States,” said Butow. “We can leverage a lot of that private investment without putting a burden on programs of record which can only be done by the government.”

Will there be a cislunar market?

Brent Sherwood, vice president of advanced development programs at Blue Origin, said cislunar space development is likely to be a “hybrid” effort funded both by government and industry.

But he cautioned that the industry is looking to the government to be a “stable customer for some predictable requirements that anchor business,” Sherwood added. “Certainly, with respect to the moon, that must be the case.”

No one has yet come up with a product that would be generated on the moon that would add enough value into the terrestrial economy to get private investors to bankroll lunar operations, Sherwood said.

NASA’s Artemis program to reach the moon in 2024 is where most of the investment will come from. A Blue Origin-led team is one of three NASA selected to design vehicles to land humans on the moon.

“We all would hope that there will be services and products that emerge that are that kind of commercial drivers, but at the beginning there are too many unknowns,” said Sherwood. “We need government to explore and develop the fundamentals. Then we can determine what are the commercial drivers that would cause investment in growth.”

NASA and other government agencies, along with the private sector, will have to start developing the logistics infrastructure to reach cislunar space and establish a human presence there, said Sherwood. He pointed out that the lunar orbital environment is dramatically different than Earth orbits, and lots of new technologies will be needed to operate there, such as communications and navigation systems.

“We need to be able to know what’s there, be able to see what’s there and maintain that domain awareness throughout this vast volume of space,” said Sherwood. “We need position, navigation and timing throughout that region of space and on the lunar surface, both the near side and far side. GPS doesn’t work there.”

The DIU-led report says U.S. participation in a cislunar economy “will require security and a stabilizing military presence.” That responsibility presumably would fall on the U.S. Space Force. The service would provide “surveillance, aids to navigation, and help when required.”