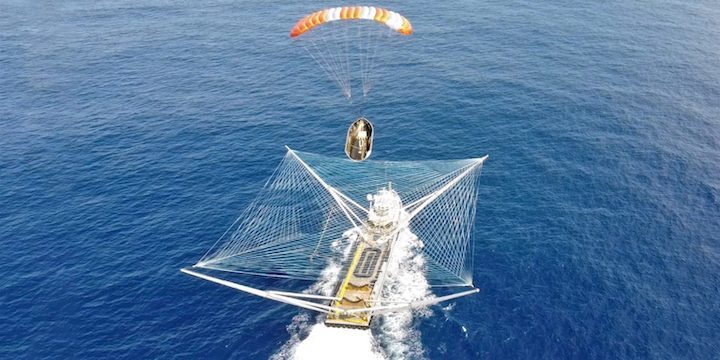 SpaceX has made Falcon 9 rocket fairing recovery look easy in a video of the latest nosecone catch, published hours after the company’s successful Starlink-10 launch.

Posted on Twitter by Elon Musk not long after a SpaceX webcast host and engineer revealed that one of two fairing catch attempts had been successful, the video offers the best in-action view yet of an operational fairing recovery. Backed by elevator music, it also certainly carries a clear signature of the CEO’s humor, carrying the torch from previous hits like “How Not to Land an Orbital Rocket Booster“, “Grasshopper vs. Cows“, and the successful launch of a Tesla Roadster and spacesuit-wearing mannequin into interplanetary space.

Lackadaisical theme song aside, Musk also shed some light on the actual process of catching Falcon fairings with giant ships and nets. Those new details point towards a major improvement made in the last six or so months that’s helped enable an unprecedented three successful fairing catches in less than 30 days.

According to Musk, SpaceX caught the Starlink-10 fairing half with both recovery ship GO Ms. Tree and the parasailing fairing half “operating on (SpaceX) autopilot.” While his comments leave a great deal of room for interpretation, they seem to imply that SpaceX has found ways to make fairing recovery almost as automatic as Falcon booster landings. During Falcon first stage recovery, the booster and drone ship technically operate as if the other doesn’t exist – the ship simply station keeps in a very specific location and the booster targets that same specific location.

Fairing recovery, as SpaceX would quickly find out, was a dramatically more complex and touchy ballet of humans, machinery, and rocket parts. Little is known about the specifics of fairing recovery beyond the fact that fairing halves have cold gas thrusters for positioning in vacuum and use GPS-guided parafoils to travel towards a rough landing zone. For most prior attempts, it’s believed that one or several crew members were responsible for manually maneuvering the recovery ship during catch attempts.

Including controlled helicopter drop tests, SpaceX failed a dozen or more consecutive fairing catch attempts and even shipped the entire operation from California to Florida before the first successful catch finally came in June 2019. In an apparent fluke, SpaceX managed to catch another fairing half less than two months later. Five months later, SpaceX secured its third fairing catch – possibly the very same fairing half caught on Monday. Another six months after #3, SpaceX hit a major milestone, simultaneously catching both halves of a Falcon fairing with two separate ships on July 21st, 2020.

Now, just 29 days after that spectacular double catch, SpaceX has caught another Falcon 9 fairing half – tempered only by the fact that sister ship Ms. Chief missed her own catch attempt. While it could certainly be a fluke of luck akin to SpaceX’s back-to-back STP-2 and Amos-17 catches, Musk’s note that “fairing chute control & ship control are closing the loop locally” points to cautious optimism.

Cryptic as ever, the comment seems to imply that SpaceX has debuted – or at least recently introduced – a kind of cooperative, autonomous navigation system that allows Falcon fairings and their recovery ships to communicate and function as a unit. For now, we’ll have to wait for the next catch attempt to get a better idea of just how much of a step forward SpaceX has made. SAOCOM 1B, SpaceX’s next Falcon 9 fairing recovery (and launch), is currently scheduled no earlier than (NET) August 27th.