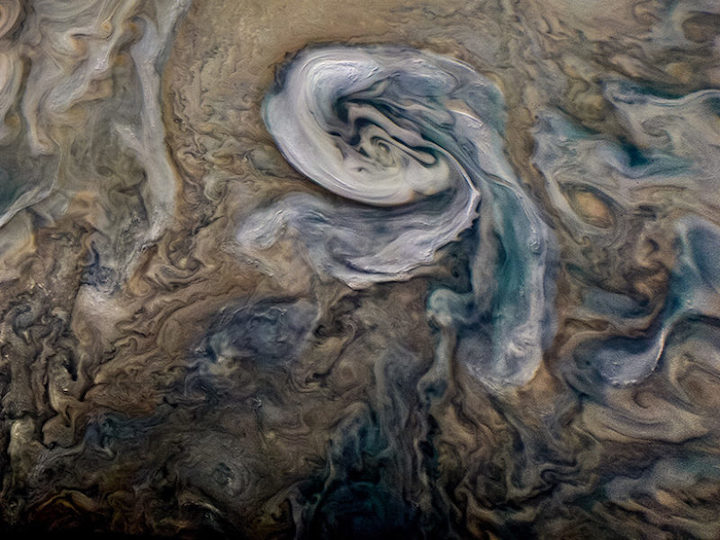 JunoCam observed this nautilus-shaped cyclone—with white ammonia clouds swirling counterclockwise—in Jupiter’s northern midlatitudes in July 2018. The round core extends up to 3,200 × 3,800 kilometers across. Precipitation in these storms is thought to include exotic “mushballs” of ammonia-water hail that can transport Jupiter’s ammonia to deep levels and account for the presence of shallow lightning flashes. Credit: NASA/JPL-Caltech/SwRI/MSSS/Kevin M. Gill, CC BY 3.0

Observations made by NASA’s Jupiter-orbiting Juno spacecraft have revealed substantial and unexpected depletions of ammonia in the planet’s atmosphere. Although some evidence for this anomaly can be seen from telescopes on Earth, Juno’s close-up microwave measurements show that the depletion of ammonia—a trace, but important, cloud-forming component in Jupiter’s skies—extends far deeper than previously known, down to a hundred kilometers below the clouds, and exhibits a striking dependence on latitude.

Radial profiles produced near Jupiter’s equator show ammonia levels of about 360 parts per million regardless of depth in the atmosphere, whereas profiles made at Jupiter’s midlatitudes reveal upper atmospheric abundances as low as 120 parts per million that increase only slowly with depth. Previously proposed mechanisms, such as direct transport of ammonia by updrafts and circulation in Jupiter’s famous atmospheric bands, do not explain this variance.

In a pair of new papers, Guillot et al. postulate a new transport mechanism—water-ammonia hail—and show that it explains Juno’s microwave data and is linked to the presence of large storms. Water is relatively scarce near Jupiter’s cloud tops, but previous research has suggested that powerful storms can uplift substantial amounts in the form of micrometer-sized ice crystals. The authors calculate that as these crystals rise, they absorb gaseous ammonia, increasing in mass and density and partially liquifying to become the slush-like cores of hail particles. (In an accompanying study of Juno data in Nature, Becker et al. report detections of lightning—and thus confirm the presence of liquid—in the region of the atmosphere where these slushy “mushballs” are thought to form.)

Continuing their ascent, the mushball cores can accumulate additional layers of ice, growing to millimeter and centimeter sizes. Once they become too heavy to remain aloft, the hail balls—now up to 10 centimeters in diameter—reverse course, losing outer layers to evaporation as they fall. But the cores, now denser and cooler than when they first formed, can penetrate far deeper into the atmosphere than where the ice crystals and ammonia gas originated. Because fully grown hail balls can contain up to 30% ammonia, the result is efficient transport of ammonia that may explain Juno’s observations.

Unlike Earth, Jupiter has no solid surface, so these hail particles continue falling until they either fully evaporate or reach neutral buoyancy in the surrounding gas. The combination of the cores’ composition and the depth they ultimately reach may thus help scientists untangle details of Jupiter’s internal structure. (Journal of Geophysical Research: Planets, https://doi.org/10.1029/2020JE006403 and https://doi.org/10.1029/2020JE006404, 2020)