The Flat Earth Theory has its origins not in alt-science but in Christian Fundamentalism. 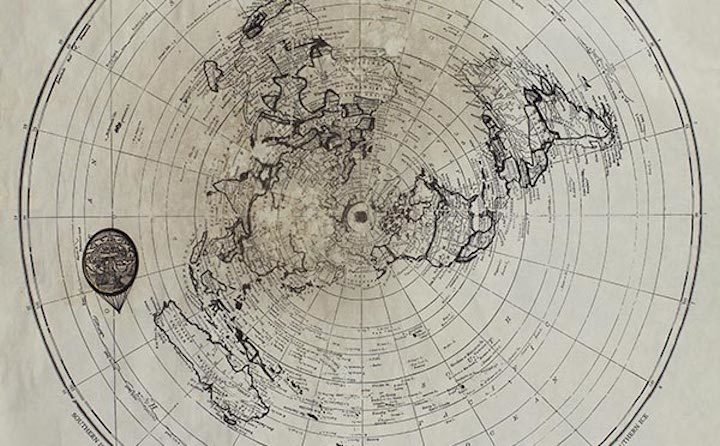 Today we're going to point the skeptical eye at a series of beliefs that are said to be about the shape of the Earth. The Flat Earth Society is well known, and widely assumed to be a group of people who lobby the idea that the Earth is not actually a globe. While this is described as an ancient, pre-scientific belief, it's increasingly common today to point out that very few ancient societies who had any meaningful science actually believed the Earth was flat. We're going to try and sort all this out, to see who actually believes what today, and who actually believed what going back through history. Perhaps of the greatest interest is the question of why certain beliefs were adopted in cases where the observations conflicted with the dogma.

The Flat Earth Society does indeed exist, but its current incarnation is quite a bit different today than what was originally founded. It's had a spotty history, having never really been much more than a newsletter mailing list, and it's only been around since 1956. While that seems quite recent compared to how long the flat Earth theory must have been around, it's actually a large chunk of it. For it wasn't until the mid-1800s that any sort of an organized flat Earth lobby existed; in fact even the very idea that people ever thought the Earth was flat is only a few years older than that.

An entire mythology has arisen claiming that authorities used to believe the Earth was flat. It's not clear how or exactly when this myth was born, but examples are easy to find. A case in point was the 1919 Boys' and Girls' Reader, in which the very first sentence of the very first chapter on history was:

When Columbus lived, people thought the Earth was flat.

This author may have been inspired by Washington Irving, the author of such tales as The Legend of Sleepy Hollow and Rip van Winkle, who also wrote a book called The Life and Voyages of Christopher Columbus in 1828. Irving's narrative included a scene where Columbus had to pitch a royal commission on his voyage; an event which Irving had to entirely invent, as the actual minutes of any such meeting were never recorded. Irving wrote:

To his simplest proposition, the spherical form of the earth, were opposed figurative texts of scripture. They observed, that in the Psalms, the heavens are said to be extended like a hide ... extended over the earth, which they thence inferred must be flat.

However, Irving knew that this did not, in fact, represent the state of knowledge in the day. For a few lines later, in the very same paragraph (which is never cited by promoters of the claim), Irving also spoke of the more learned members of the commission:

Others, more versed in science, admitted the globular form of the earth, [but] ... they observed, that the circumference of the earth must be so great as to require at least three years to the voyage...

Older examples exist as well. Even Thomas Jefferson was fooled by the myth, wrongly writing in 1784 that:

Galileo was sent to the inquisition for affirming that the earth was a sphere: the government had declared it to be as flat as a trencher.

Even the popular meme of "Turtles all the way down", in supposed reference to an ancient belief that the Earth was flat and resting on the back of a giant elephant, which stood on the back of the World Turtle, is not a literal claim. It's from an old joke, repeated over and over again in books since at least the 1800s. The old illustrations we see of turtles bearing the flat Earth are not from ancient cultures, but from Western misinterpretations of allegorical Eastern beliefs, which were then parodied into straw man arguments depicting ancient science as ridiculous.

The ancient Greeks had no doubts that the Earth was a globe, as virtually any observation or measurement you can make indicates this. Pythagoras noted this as early as the 6th century BCE, followed by Aristotle, Euclid, and others. Building upon this foundation of knowledge, Eratosthenes, a geographer and mathematician, measured the difference in the angle at which the sun shone down two different wells about 925 km apart, the locations of which were thoroughly established by multiple surveys. Through a simple geometric computation, he determined the circumference of the Earth to within 2% of its exact measurement known today. This was in about 240 BCE, and the experiment was repeated and confirmed by any number of other Greek scientists.

And such has been the state of our knowledge ever since, as accepted by virtually all educated people, even throughout the Middle Ages. And so it remained until the 1800s, when a small but vocal group of Biblical literalists began interpreting Bible passages as meaning that the Earth was literally flat. None of these was more influential than Samuel Rowbotham, who exclusively used the pseudonym Parallax. Parallax had made many personal observations at a six-mile stretch of the Old Bedford River in Norfolk, England, an absolutely straight and calm canal. For whatever reason, Parallax believed he was able to see straight along the surface of the water for the full six miles. He wrote, lectured, and debated tirelessly. In 1864, he published the book Zetetic Astronomy: The Earth not a Globe, which became the Magnum Opus of the flat Earth movement. According to his science, which he called Zetetic Astronomy, the Earth was a flat disc with the North Pole at its center and the vast ice walls of Antarctica rimming its outer edge, and hell lay beyond the ice. He drew the word zetetic from the Greek for inquiry, which in Parallax's mind meant a continuous questioning of all established science.

Parallax made himself quite the media personality, and established the Universal Zetetic Society. Among its members was John Hampden, who made a much-publicized £500 bet that he could prove the Bedford canal was level and had no curvature. It was accepted by a surveyor, Alfred Wallace, who was unaware of Hampden and Parallax's previous experience at the canal, and also unaware that one of the referees chosen to judge the results was another Parallax follower. A wonderfully detailed account of the Bedford Level Experiment is given in Christine Garwood's excellent book Flat Earth: The History of an Infamous Idea.

It took several attempts before equipment could be sorted and boats and crowds could be managed, but eventually the contenders established a sight line thirteen feet above water level from their position to a bridge six miles away. A pole on the shore at the halfway point was marked at the thirteen foot level, and when studied through a surveyor's theodolite, the mark on the pole was about five feet above the line of sight — just as the curvature of the Earth would predict. Wallace believed he'd won the bet, but Hampden bizarrely asserted that the five feet was accounted for by the height of the crosshairs in the eyepiece — a claim so outlandishly wrong that neither Wallace nor the reporters on hand could form a cogent argument to dispute it. Thus it was reported that Hampden won the bet and the Earth was flat; until a replacement referee, the editor of a hunting magazine, finally judged in favor of Wallace, and awarded him the £500 that Hampden had put on account. Hampden sued Wallace, Wallace sued Hampden, and it was a terrible mess until Hampden was at last jailed for making vicious public death threats against Wallace.

So all of this brings us to the modern International Flat Earth Research Society, founded in 1956 by an English sign painter named Samuel Shenton, whose belief system was a curious combination of Biblical literalism and alternative science. He shared Parallax's view that the Earth's surface was a flat circle surrounded by Antarctica, but he also believed that Atlantis lay buried beneath the North Pole and that its flying saucers would rise up through a hole and visit us regularly.

Shenton considered his International Flat Earth Research Society to be a descendant of the Universal Zetetic Society, though there was no actual connection. He ran the organization as a newsletter out of his sign painting shop. Although he did support his views with scriptural quotes, his was very much an alternative science group first, and a creationist group second. Shenton took on the mammoth task of defending the flat Earth during the opening days of the space race, space travel, and the moon landings (which he, of course, insisted were hoaxed). He developed alternate explanations for everything — every satellite seen flying overhead, every procession of the seasons, even how the Earth casts a round shadow on the moon during a lunar eclipse. He won few friends with his assertion that the fire that killed the three Apollo 1 astronauts in 1967 was a curse from God in punishment for trying to explore the heavens. By the time spacecraft sent back photos of the Earth clearly showing its spherical shape, Shenton's excuses grew so bizarre that International Flat Earth Research Society membership dwindled to only twenty four.

Upon Shenton's death, an American couple, Charles and Marjory Johnson, picked up the torch. They lived in devout poverty in the California desert. They incorporated the International Flat Earth Research Society of America as the Covenant People's Church, and adopted a fire-and-brimstone mannerism. Their quarterly Flat Earth News steered away from Shenton's alternative science and toward radical Christian fundamentalism mixed with broad conspiracy mongering. Charles burned bridges everywhere, waging wars against the US government, other flat Earth groups, authority of all kinds, the scientific method itself, and even other creationist groups like the well-funded Creation Research Institute.

A representative tidbit of Flat Earth News doctrine was the claim that the United Nations flag, which shows a flattened map of all the continents with the North Pole at the center, represents the true shape of the Earth as known to the elite UN Illuminati.

The International Flat Earth Research Society of America died when the Johnsons' modest home burned down and they lost everything in 1996. The Johnsons themselves died only a few years later, and for some time there was no real flat Earth society of any kind. But in 2004, a Londoner named Daniel Shenton (no relation to Samuel Shenton) created an Internet forum at theflatearthsociety.org, and in 2012 announced that he'd acquired Samuel Shenton's archives from the University of Liverpool. The forums are quite active, with hundreds of thousands of posts; but from paging through them, it appears that the current Flat Earth Society barely mentions Biblical literalism, but is instead mainly about conspiracy theories, distrust of science, and any type of alternative science views.

One lesson to learn from the flat Earth movement is the folly of challenging science's core discoveries without having having a foundation of scientific literacy. Research is always going on, and we're always learning new things and improving our knowledge. But these new discoveries are rarely, or never, that profoundly well-established core fundamentals like the shape of the Earth are wrong. For someone who lacks thorough expertise on a subject to jump in and suddenly claim that everything everyone else knows is wrong is a sure sign of crankery. Take the flat Earthers as a lesson in the importance of developing a basic scientific literacy.

UFO-Forschung - Verschwörungstheorien: The Flat Earth Theory has its origins not in alt-science but in Christian Fundamentalism.
158 Views
Created with page4