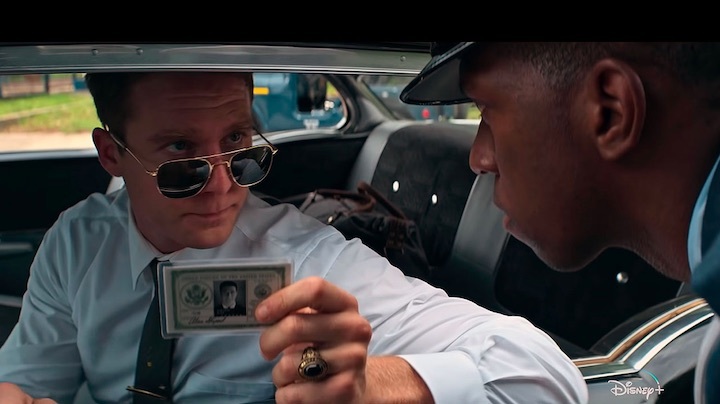 Alan Shepard (Jake McDorman) races to secure his place in space history in the first clip from National Geographic's series, "The Right Stuff," coming to Disney+ this fall. (Disney+)

A missing piece of mail almost derails Alan Shepard's future in a first look scene from the pilot episode of "The Right Stuff."

Released on Saturday (July 25) as part of a San Diego Comic-Con@Home virtual panel with the cast and crew of the upcoming National Geographic scripted series, the clip was set up by actor Jake McDorman, who portrays the real-life astronaut who became the first American to launch off of Earth.

"He almost didn't get his letter to go to space, which is a true story," McDorman said. "Shepard started to hear that people around him were getting summoned to Langley [Research Center] and he wasn't included, and that was simply because his letter got lost."

"So he got it about a day late and, uh, freaked out," McDorman said.

The humorous scene dramatizes the actual events that kicked off Shepard and six other test pilots being selected by NASA to become the first U.S. astronauts in 1959. "The Right Stuff" follows the journeys of the "Original 7," as was chronicled by Tom Wolfe in his 1979 book by the same title.

"So you've got these perspectives from all these different astronauts on what the 'right stuff' is and the one common thread, as best as I could put together, is it's this relationship with fear," said McDorman. "Fear is something that is such a constant and such a familiar kind of reaction that these people faced day in, day out for years on end, that it is the ability to think clearly, think rigidly, think logically through experiencing feelings that would send 98 percent of people into a panic, and do it anyway."

What is the 'right stuff'?

"You have it. You told us that you signed up right after the Challenger tragedy and that is the 'right stuff,' in my opinion," McDorman told Mae Jemison, the first Black woman to fly into space and the moderator for Saturday's Comic-Con panel.

"I think that the reason it's not just called bravery or a lack of fear and that it's something so thought provoking and difficult to define is that it is so individual and it can be something different for every person on this planet," said Aaron Staton, who portrays astronaut Wally Schirra. "And for these guys, it's funny, because, as I say to my kids, it's not brave to ride a rollercoaster if you love roller coasters. That is not bravery, that's something else, that's thrill seeking. What the people in this story are made of and the things that they fight for or conquer fear for is different. And I think that's the case for really everyone."

The "right stuff" also does not apply only to the men, said Eloise Mumford, who portrays Trudy Cooper, a pilot and the wife of astronaut Gordon Cooper.

Patrick Adams, who is cast as John Glenn, said that his reading of Wolfe's book suggests the 'right stuff' may have had a deeper meaning.

"I mean, obviously it's such a reduction of what it takes to do what any of these people do, but I also think he kind of is referring to the women in these people's lives who had to watch their husbands die day after day after day," said Adams. "Such a big part of the book is the mortality rate and hearing the plane crashes and hearing the sirens go off and what it takes to survive that."

In addition to reading Wolfe's book, the actors had the chance to further research who they were portraying and the history of the space program.

"I've never had the opportunity to play someone for which there's been so much written and there's so much at your disposal," Adams said. "So I started by, obviously, re-reading [Wolfe's] book and then going over the couple of books that he [Glenn] wrote or had written about him."

"But then I found out about the Ohio State archives that have been maintained and that he [Glenn] played a big part in creating over the years. And I got in touch with them and I managed to spend about 12 hours in there just going through boxes of stuff," he said.

"He was the first actor cast and in John Glenn fashion he set up a hub and put us all on an email chain where we could just compile research," said McDorman.

Not everyone had as easy a time finding more about their role. Patrick Fischler found it a challenge to learn more about Bob Gilruth, who headed the Space Task Group charged with putting an American in space.

"It's really hard to find stuff about Bob because unlike all the guys [the astronauts], he did not write a book and no one wrote a book about him. He was so private, did not like to speak a lot," said Fischler. "I did a real deep dive into finding information about him and I found in the air and space archives a 120-page interview with him from the late seventies, early eighties."

"In that, he talks about how hard it was to make decisions and how personally he took any mistakes, anything that happened to these guys," Fischler said. "He was very fearful of anything going wrong. And [when] things did go wrong, it was like losing a kid. He describes that."

The cast also found inspiration by visiting some of the real locations where the Mercury astronauts had once worked, including the Cape Canaveral launchpad where they left Earth.

"Just as a fan of history, it was as remarkable for me as it was terrifying," said Michael Trotter, who portrays Gus Grissom. "Some of us did to go out on the pad where Shepard went up and Grissom went up, and I remember being directly underneath the Redstone [rocket now on display] and craning my neck up to see if I could even make out the minuscule capsule that these absolutely insane people were willingly going into and then being shot on a ballistic missile to space."

"If there is a physical representation of the daunting challenge and its magnitude, it was just standing on that pad, staring up at that rocket," said Trotter. "It was invaluable as an actor."

National Geographic's "The Right Stuff" is set to premiere this fall on the Disney+ streaming service.

Comic-Con@Home panel with the cast and crew of Disney+'s "The Right Stuff." Click to enlarge video. (Comic-Con International) 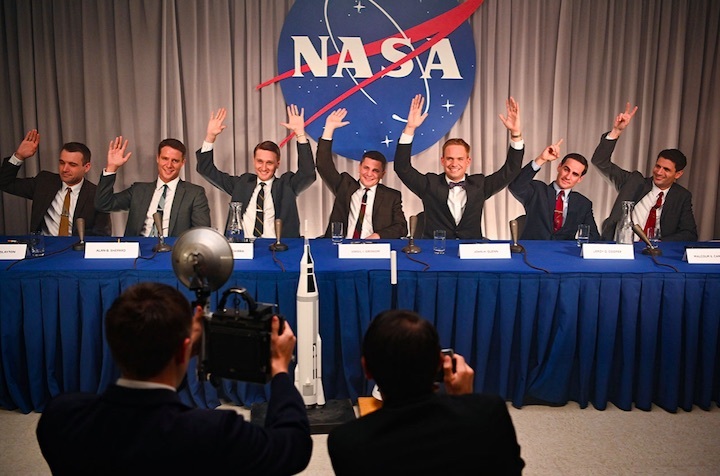