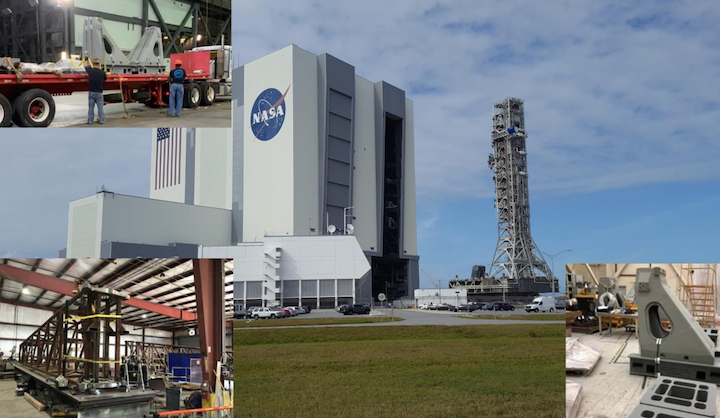 A second Mobile Launcher (ML-2) for NASA’s Space Launch System (SLS) is heading into its construction phase as Ground Support Equipment begins to arrive at the Kennedy Space Center (KSC). NASA called for a second ML to be constructed to cater for the slightly taller Block 1B SLS that is set to come online in the middle of the decade.

SLS already has a Mobile Launcher (ML-1), converted from its role with the defunct Ares-I rocket. Construction of that ML was initiated by a contracted award in 2008, with a total cost now estimated to be around $1 billion dollars USD.

Now residing in the Vehicle Assembly Building (VAB) ahead of hosting the Artemis-1 SLS rocket, the first flight hardware to be stacked on its deck will be the Solid Rocket Booster (SRB) segments that recently arrived at the Kennedy Space Center (KSC). 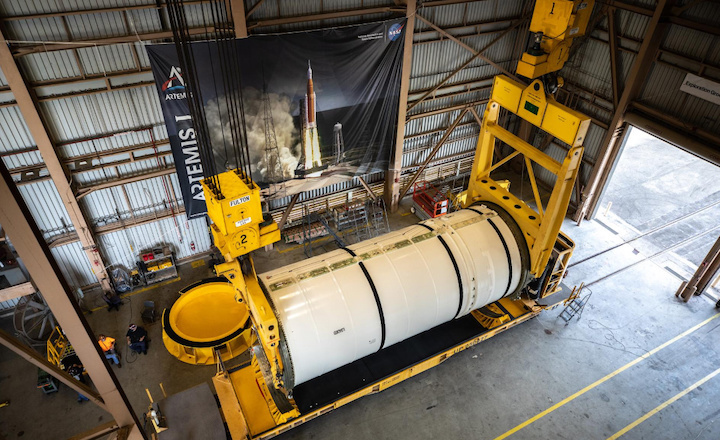 Its role with SLS, however, was tied to one variant of the rocket, the Block 1 – which in turn is the interim version of NASA’s new Heavy Lift Launch Vehicle.

The plan has always been to swap the Block 1’s Interim Cryogenic Propulsion Stage (ICPS) with the more-capable Exploration Upper Stage (EUS), in turn moving to the SLS Block 1B variant. Initially, this was set to occur after two test flights – one uncrewed, one crewed – with the Block 1.

The ICPS is a renamed and modified 5 meter Delta Cryogenic Second Stage that is currently used on Delta IV Heavy rockets and was previously used on the Delta IV M+ 5 meter upper stage configurations of the Delta IV family.

The challenge faced by NASA’s Exploration Ground Systems (EGS) Program revolved around catering for the Block 1B rocket, which is slightly taller than the Block 1, and thus incompatible with ML-1. 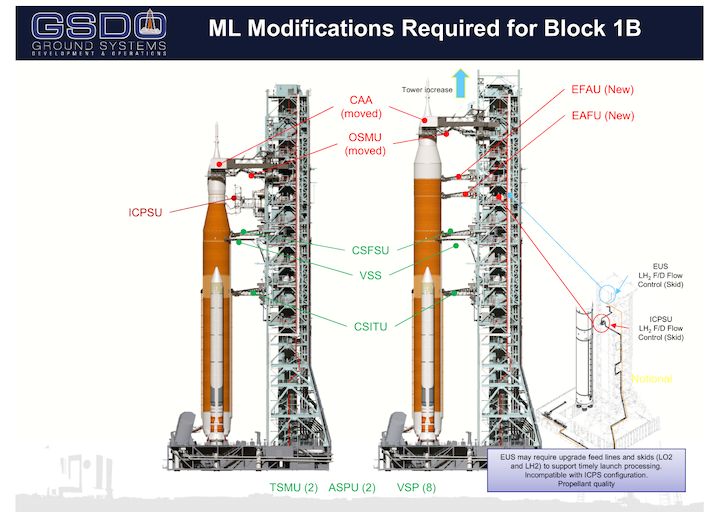 An option to once again convert the current ML was ruled out due to the amount of time it would take and further impacts that would have on SLS’s already lethargic launch cadence. As such, the decision was made to build another Mobile Launcher dedicated to the Block 1B rocket.

The second Mobile Launcher (ML-2) has a cost estimate of $450m. However, like ML-1, that cost is likely to rise over time based on the challenges involving ML-1, which ranged from being overweight to suffering from a slight lean. Both of these issues have since been resolved via engineering solutions.

ML-1 will now be involved in more than just two launches due to NASA’s decision to launch several Block 1 missions to allow for delays surrounding the EUS. This in turn has removed some schedule pressure on the readiness of ML-2.

However, with ML-1 in the VAB, the construction site north of the assembly building has been freed to allow for the build-up of the huge structure to begin in earnest. Signs the “construction phase” have begun have been marked by the arrival of hardware that will make up the complex arrays of umbilical lines and Ground Support Equipment.

Hardware that has arrived at KSC for ML-2 include the Vehicle Support Posts (VSPs). Each of SLS’s two Solid Rocket Boosters require four VSPs, which act as the primary structural interfaces between the rocket and the ML. Each is 1.5 m (60 inches) tall with a base of 1.09 x 1.24 m (43 x 49 inches), made of cast steel with walls 10 cm (four inches) thick.

Precision Fabrication & Cleaning – as prime contractor for building this hardware element – sent 10 VSPs, which includes two spares, to the VAB instrumentation shop for outfitting with strain gages and cabling.

They will then head to the Launch Equipment Test Facility (LETF) where engineers will calibrate the instrumentation on each VSP, before they are stored in preparation for delivery for integration into the ML-2 base structure.

Metal is also being cut on the Exploration Upper Stage Umbilical (EUSU), which is a major modification that caters for the Block 1B rocket’s beefy upper stage.

Modifying the ML-1 version of this umbilical for the EUS was ruled out via trade studies, which noted it would be more cost-effective to design and build a new umbilical from scratch.

The new EUSU was an in-house design by NASA Engineering and is being fabricated by JP Donovan.  It too will undergo testing at the LETF before being delivered for integration onto the ML-2 tower.

As with ML-1, all of the ML-2 arms and umbilical will journey through the LETF, located just south of the Operations and Checkout (O&C) Building at the famous spaceport. The area has a deep history, ranging back to the Shuttle era. 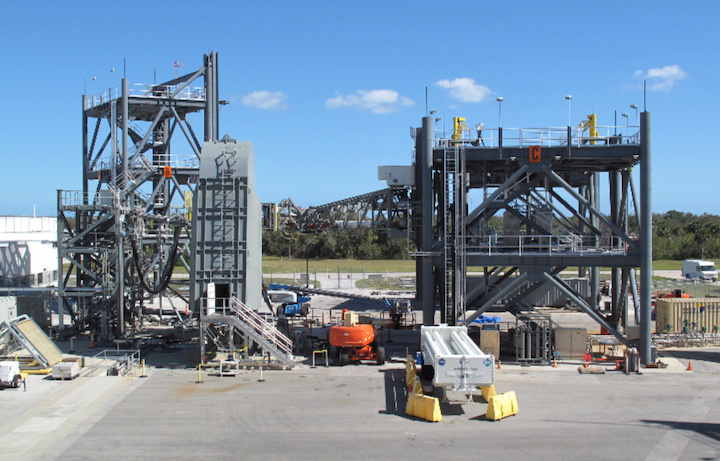 It has also been involved with Cryo testing for the defunct X-33 technology demonstrator for the VentureStar program and had a role in testing Delta IV ECS umbilicals and Centaur Upper Stage rolling beam tests.

The facility allows for simulated launch vehicle events such as movement from wind, ignition and liftoff, effects of solar heating and cryogenic shrinkage.

The fabrication, testing and installation of elements for ML-2 are all working towards a completion date for the huge structure in 2023, ready to support a schedule that allows for a potential – if unlikely – use of the Block 1B on the 2024 Artemis-3 mission.