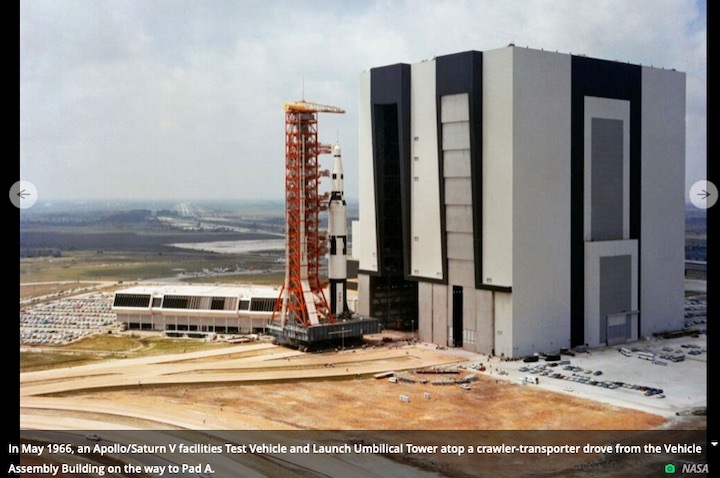 At the time, the "Launch Operations Directorate" under Wernher von Braun and his team of German scientists was based at Marshall. But NASA's leaders realized they would need their own facilities in Florida alongside the Cape Canaveral Air Force Station. So they created a new "Launch Operations Center" on nearby Merritt Island. President Lyndon B. Johnson would rename the facility Kennedy Space Center a week after President John F. Kennedy's November 1963 assassination in Dallas.

As plans for the Apollo Program developed, NASA also soon realized it would need a large building in which to assemble the Saturn V rocket that would power the Moon landings. Work began on what was then known as the Vertical Assembly Building (VAB), where the big rocket would be stacked in a vertical configuration before rolling out to the launch pad.

The 160-meter-tall building was topped off in 1965 and completed in 1966. Construction photos of the VAB's development—the building required almost 90,000 metric tons of steel—are as incredible as those of the finished building itself. But NASA officials wanted to make clear at the time that this building was not an end in itself. Rather, it was a means to an end.

"This building is not a monument," said Kurt Debus, the German rocket scientist who supervised construction of the Florida facilities in 1965. "It is a tool, if you will, capable of accommodating heavy launch vehicles. So if people are impressed by its bigness, they should be mindful that bigness in this case is a factor of the rocket-powered transportation systems necessary to provide the United States with a broad capability to do whatever is the national purpose in outer space."

Center Director Kurt Debus speaks at the "topping off" ceremonies for the Vehicle Assembly Building in 1965.
NASA

Even before it was completed, the VAB's name was changed from Vertical to Vehicle Assembly Building because it was felt that the building might well be used for launch vehicles other than the Saturn V. And indeed it would, serving the space shuttle from 1981 to 2011. After returning to Earth, the space plane would roll into the VAB following refurbishment inside the Orbiter Processing Facilities.

Following the shuttle's retirement nine years ago, the cavernous building sat empty for a time. But as Debus noted back in 1965, the building was built to serve the nation's large rockets and would soon be called upon again. The VAB has four high bays, which will be used for various purposes during the coming decade. One will be used to stack NASA's big Space Launch System rocket, and another is presently in use for Northrop Grumman's Omega rocket.

The future of both these large rockets is far from certain—each is likely to only exist as long as the government foots the bill (NASA for the SLS rocket, the US Space Force for Omega)—but as rockets come and go, the VAB remains the same.

Raumfahrt - NASA’s most iconic building is 55 years old and just getting started “This building is not a monument.”
« Zum vorherigen Eintrag Zum nächsten Eintrag »
798 Views
Created with page4