The two-stage Electron booster rose off the pad at Rocket Lab's New Zealand launch site at 5:19 p.m. EST (0919 GMT; 9:19 p.m. local New Zealand time), carrying seven Earth-imaging satellites aloft, including five payloads for satellite-imaging company Planet, as well as a satellite for Canon Electronics and one for UK-based In-Space Missions. But a problem during the rocket's second-stage engine burn led to the loss of all seven payloads.

Rocket Lab CEO Peter Beck apologized for the failure on Twitter. "I am incredibly sorry that we failed to deliver our customers satellites today," he wrote on Twitter. "Rest assured we will find the issue, correct it and be back on the pad soon." 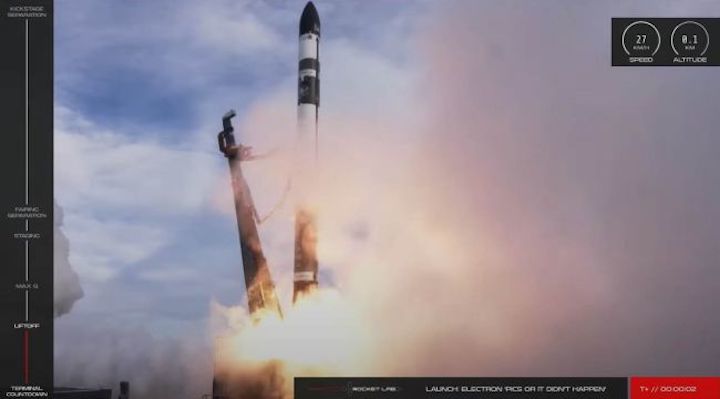 The launch seemed to proceed as planned for the first crucial minutes of flight. Then, about six minutes into the launch, the live video feed from the rocket froze. At that point, the company's live broadcast showed that the rocket started to lose speed, and altitude. It was then that Rocket Lab cut the live video feed.

The company announced shortly afterward on Twitter that there was an issue with the rocket and the payloads were lost.

Rocket Lab was originally scheduled to launch this Electron on Friday (July 3), but delayed the flight to Sunday (July 5) due to bad weather.. But a new weather outlook prompted Rocket Lab to move the launch one day earlier — a rarity in the spaceflight industry. (Typically launch dates move further out, rather than forward.)

The mission, the 13th flight for Rocket Lab, was named "Pics or it Didn’t Happen" as a hat tip to the seven Earth-imaging satellites on board the rocket. Today's flight marked the second launch for the California-based rocket builder in just three weeks. It was the company’s fastest turnaround time between missions to date.

The primary payload onboard was Canon Electronics’ CE-SAT-IB — a small satellite loaded with high-resolution and wide-angle cameras to take photos of the Earth. Also tucked inside the Electron's nose cone were five SuperDove Earth-imaging satellites from the company Planet. The last payload was a small satellite called Faraday-1, from In-Space Missions, which contained a suite of instruments from a group of organizations that needed a ride to space.

"The In-Space team is absolutely gutted by this news," In-Space tweeted shortly after the incident was announced. "Two years of hard work from an incredibly committed group of brilliant engineers up in smoke. It really was a very cool little spacecraft."

Planet's CEO Will Marshall also announced the loss of its satellites on Twitter, while also noting that the company has existing plans to launch more of its satellites this summer on two separate launches. "While it’s never the outcome that we hope for, the risk of launch failure is one Planet is always prepared for," the company said in a statement. Those launches are scheduled to ride to orbit atop a European Vega rocket as well as a Falcon 9.

The company will need to determine what caused the anomaly, as it has big plans for the future, including an upcoming mission to the moon. The company is slated to launch a cubesat to the moon in 2021 as part of a NASA contract worth $9.95 million. That flight is scheduled to launch from the company’s U.S.-based launch site at NASA's Wallops Flight Facility in Virginia.